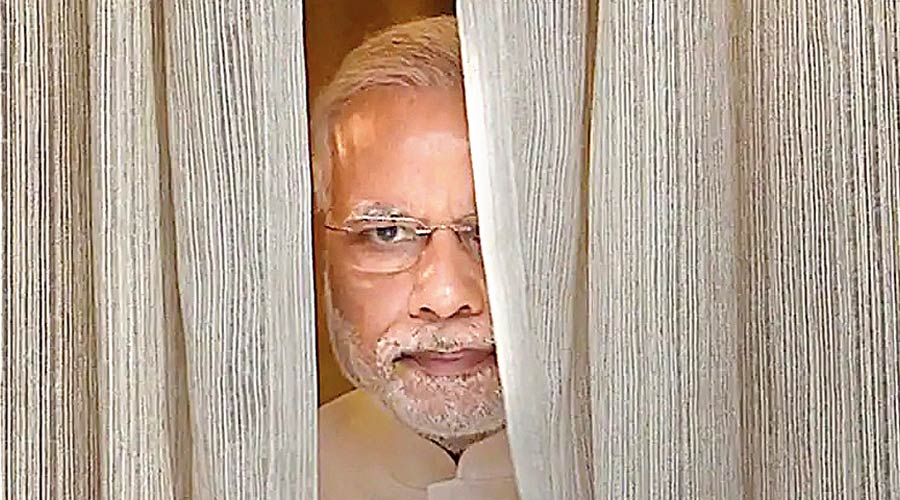 In times of great uncertainty, economists usually become either very optimistic about the future or deeply pessimistic. They describe seeing the glass as half-full or as half-empty. The metaphor assumes that there is a glass having water to the extent of 50 per cent of its volume. The level of water in the glass is the data, and its two interpretations are judgements about the data, which, in this case, are both correct. For the Indian economy, developments in official data during the past five years or so make it difficult to even know the extent of water in the economy’s glass. On top of it, the optimists claim that the glass is completely full while the pessimists say that since the water is not clearly visible, it is reasonable to claim that the glass is completely empty. This is the way the discourse on the economy has emerged in recent times. Stretching the metaphor a little further, one can argue that the government is supposed to use policies to facilitate the filling-up of the glass. In India, the National Democratic Alliance government’s economic policies were supposed to expedite this filling.

The big expectation that analysts had in 2014 was that many pending economic reforms would be carried out by a political formation that is supposed to be market-friendly and believes in small governments. Has there been a great disappointment as far as economic reforms are concerned? A quick review would clearly show that even as a right-of-centre outfit, the Bharatiya Janata Party, which leads the NDA, has failed to push through significant economic reforms that could have promoted markets and facilitated private investments.

Let us take up the question of agricultural reforms that would have addressed the complex issues of fragmented land holdings of small and marginal landholders, low productivity, degraded soil, and very poor incomes of farmers. What the government did was to rush through, in a completely undemocratic fashion, a set of reforms that turned out to be unacceptable to all kinds of farmers, rich and poor alike. What was perceived by the beneficiaries was this: while the fundamental problems of their livelihoods were not being addressed, there was a threat that agriculture would now be controlled by a few large corporate houses making the prospects of the farmers’ future prosperity even bleaker. It is well known that reforms have to be carried out carefully by tactfully building political consensus instead of stuffing them down the throat of beneficiaries. An elementary lesson of public policymaking is that a good policy thrust upon the people may make everybody averse to future reforms, even if the policies are well-designed and potentially beneficial.

Another pending reform which previous governments had been wary about is changing the labour market regulations. Again, the government brought in a set of reforms without much consultation in Parliament or engagement with stakeholders such as labour unions. The reforms were basically a consolidation and the bringing together of different sets of laws and regulations under one umbrella. Certain benefits envisaged in the reforms would be difficult to handle and monitor, while others opened the door for increasing exploitation of the workers. In any case, over 90 per cent of workers in India are from the informal sector and the gig economy. Their conditions were always precarious while working, or while being unemployed. The precondition of a well-thought-out safety net would be required to allow quick reallocations of labour in an economy undergoing rapid technological change.

Disinvestment of public sector undertakings, especially the non-strategic, loss-making ones, was expected to be a major catalyst for markets to attract private investments. This has failed. Every time the government announces grand plans and makes ambitious budget allocations, the result turns out to be exceptionally weak and inadequate. Plans were announced about monetizing government assets and initiating an IPO for the Life Insurance Corporation. Ambitious plans leading to low achievements create reform fatigue where, gradually, there is an erosion of confidence in the ability of the government to sell assets at reasonable prices. The government’s only achievements in terms of reforms were the privatization of Air India and India climbing in the World Bank’s ranking of countries in terms of the ease of doing business. However, that got clouded too, as the rankings were withdrawn and the World Bank started an investigation of its own to find out whether data were accurate or reliable.

There were a few instances of the prime minister’s propensity to shock and awe through radical policy announcements. One such was the declaration of demonetization. It was supposed to get rid of black money, nudge people towards cashless transactions, and deter money-laundering for criminal activities like terrorism and drug smuggling. It turned out to be chaotic. Black money did not go away, and the Reserve Bank of India computed that more cash was returned to it for exchange than was supposed to be in circulation. What happened in the process was that the micro, small and medium sectors of the economy got thrashed. The sectors shrank significantly with many jobs and livelihoods disappearing into bankruptcy. The pandemic’s (not a fault of the government) mismanagement (the reaction could have been more rational) in the first wave in 2020 further washed away the MSME sectors of the economy. If online banking has increased, it is due to an existing trend, given the convenience of this method which was later accelerated by the compulsions of the pandemic.

The NDA government has also shown a lack of clarity about the role of international trade and global connectivity in economic growth. First, egged on by Donald Trump’s announcements, India took on its trade war with China in a rather infantile way. The BJP workers started destroying Chinese imports and urged citizens to boycott Chinese goods — an unnecessary insult. We still have the highest trade deficit with China. The call for Atmanirbhar Bharat is confusing. Does self-reliance mean the kind of protectionist policies of the 1950s and 1960s? Or does it mean anyone can come and produce in India? Large foreign investment flows would obviously reduce the degree of atmanirbharata of the country. In a similar vein, the ‘Make in India’ slogan is also perplexing. Who is to make in India? At what terms?

These are just a few instances to illustrate that the NDA government has failed as an ideologically right-of-centre political formation. It has tried to be a populist government but with limited results. Part of its populism sprang, once again, from the pandemic. The BJP must be realizing that governing India with a whip hand is not easy. A diverse, federal democracy in India, despite its many weaknesses, is a difficult rock to move. Working within the system requires careful consensus-building among states and transparency in sharing economic data with the nation. Improving the open market for buying and selling of law-makers is not exactly what economists mean by an instance of productive economic reforms.