The co-hosts of the tournament beat the Proteas decisively, with a margin of 104 runs 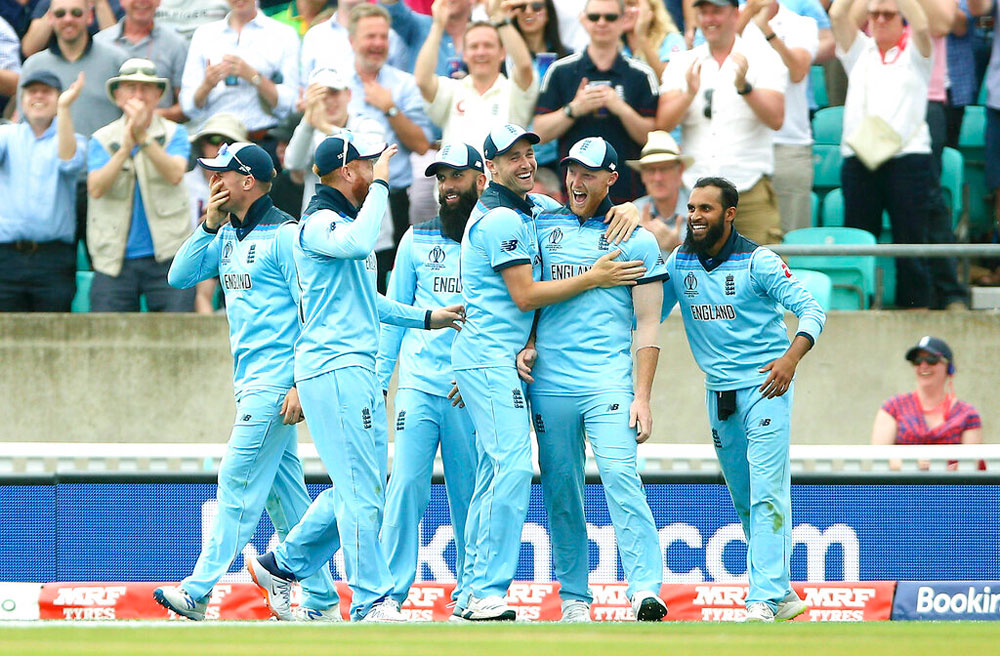 On top: England players celebrate the dismissal of South Africa's Andile Phehlukwayo on Thursday
Picture by AP
The Telegraph   |   Published 01.06.19, 06:47 AM

Sir — England, who are the favourites to lift the World Cup this time, got off to a flying start in their inaugural match against South Africa at The Oval on Thursday. The co-hosts of the tournament beat the Proteas decisively, with a margin of 104 runs. While it is true that the South African captain, Faf du Plessis, surprised everyone with his decision to open the bowling with the spinner, Imran Tahir, and his gamble paid off with the second ball itself, it cannot be denied that it was England’s game all the way, with four out of their top five batsmen scoring more than 50 runs each.

But it was Ben Stokes whose masterful knock of 89 runs took England to a winning total of 311 runs. Added to this was his acrobatic catch to dismiss Andile Phehlukwayo off the bowling of Adil Rashid, and he managed to keep England’s “favourites” tag intact.

The English team is definitely the one to watch out for during the tournament. If Jonny Bairstow and Jos Buttler click as well, then many of England’s opponents may have to chase totals that exceed 400 runs. With its pathetic performance against England, South Africa has once again proved to be a team that chokes under pressure. They must pull up their socks if they are to put up a decent fight in the rest of the tournament.

Sir — In its first match of the World Cup against South Africa, the English team proved why it is being tipped to win the trophy this time. Jonny Bairstow may have got out for a duck, but Jason Roy, Joe Root, Ben Stokes and the captain, Eoin Morgan, each pummelled the South African bowlers to get past the half-century mark. Stokes, in fact, even got close to scoring a century, but got out in the 48th over. The catch he took to get Andile Phehlukwayo out is being billed as one of the greatest catches ever taken. England eventually crushed the Proteas with a whopping 104-run margin.

While it was thrilling to watch the match, England’s form can prove to be a huge worry for India. We have a strong team as well, but even our much-vaunted batting line-up is known to crumble under pressure. The Indian team will have to observe England’s game carefully and find its weaknesses.

Sir — With the World Cup having started and the co-hosts, England, looking set to live up to their “favourites” tag, the captain of the Indian men’s cricket team, Virat Kohli, will be feeling the weight of the expectations of millions of Indians.The top-heavy batting order can be put under pressure, especially given the inevitable overcast conditions that will assist swing and seam. Although luck will play a major part in the knockout stages, the worry about consistency will be weighing down on the Men in Blue. This concern becomes greater when one considers the current form and consistency of the English team, which is at present the top one-day international team in the world.

As the Number Two ODI team, India, too, has the capability to win the World Cup. But it must be remembered that none of the participating teams should be underestimated. Each of them could topple a giant on a good day. One hopes that the Men in Blue do not get complacent about their ‘world number two’ tag. This is likely to be one of the most exciting tournaments in the history of the World Cup.

Sir — The manner in which a Muslim man, Mohammad Qasim, was shot in Begusarai after he revealed his identity makes me question my belief in India’s secular credentials. Are we really living in a country where there is ‘no discrimination on the basis of religion’? If we are, then why do ordinary citizens get shot or lynched simply because of their religious identities? It is sad that even after nearly 72 years of independence, people tend to forget that India is not a ‘Hindu’ country. Hinduism may be the religion of the majority of the population, but that in no way justifies the persecution of minority communities. We must remember that we are all Indians first.