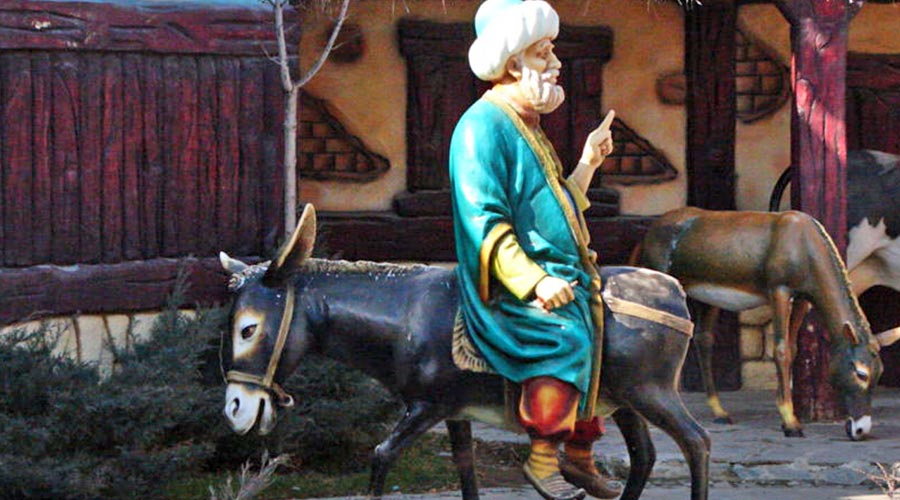 The centennial year of Satyajit Ray’s birth — it has drawn to a close — was marked by what is elixir to the Bengali mind: nostalgia. Nostalgia need not be unproductive. In fact, Ray’s birth centenary brought about a feverish bout of activity, with the screening of his films, the organisation of exhibitions, and, hearteningly, the resurrection of some of his fictional heroes. For instance, there has been a bit of hoichoi regarding a new web series on Feluda, even though Professor Shonku and Tarini Khuro — two other memorable creations by Ray — have remained (mercifully?) untouched.

There’s not been much on Molla Nasiruddin either.

Of course, Nasiruddin does not owe his existence to Ray. But Ray did write about him, translating his tales to Bengali. Molla Nasiruddin er Golpo appeared in 1985. Its Introduction makes two points that are pertinent to this article. First, Nasiruddin was born in present-day

Turkey. There is anthropological evidence to support this speculation: the annual ‘International Nasreddin Hodja festival’ will begin, as it does each year, a few days from now on July 5 in Aksehir, Turkey, offering this columnist a life-saving ‘peg’ to pen this piece.

Second, Nasiruddin’s tales never quite make it clear whether he was a wise man or a fool, a line of query that has fostered an intellectual and mystical tradition that, in this writer’s opinion, deserves scrutiny.

Tahir Shah, writer, traveller and a restless soul, is adamant that Nasiruddin was both: one of civilisation’s wise-fools.

Is it common knowledge that Ray’s interest in Nasiruddin’s provenance as well as his enduring legacy is shared by Shah? Admittedly, Shah has taken things a bit far — quite literally. Travels with Nasrudin, one of the three books that Shah has written on this engaging figure from the Islamic world, chronicles journeys of his own — physical and spiritual — in search of this mythical-mystical being. The search has taken Shah to Portobello Road in Notting Hill where he glimpsed, inside a stately mansion, footage of Nasreddin in Bukhara, a

film made by Yakov Protazanov, one of the founding fathers of Russian cinema. It took him to Jinbocho, Tokyo, where he discovered a treatise that mentioned ‘Kashikoibakka’, possibly Nasiruddin’s Japanese jester avatar. In Yucatan, Mexico, he caught sight of ‘Babak’, the beloved, ancient, intelligent idiot dressed in a “helmet made from a saucepan” with diving flippers for feet and a tambourine for a hand. And, then, in the Swat Valley, a group of mujahideen whispered to Shah their secret weapon — “the wisest fool… a man so dazzling in his foolishness [that] he surpasses the intellect of any genius alive.”

The sheer geographical span of Nasiruddin’s afterlife that Shah (un)covers should not come as a surprise. After all, the Uzbeks call him their own; Azerbaijan had a satirical periodical in his name; Ottoman Bulgarians introduced a twist — a manifestation of prevalent political and cultural tensions — by portraying Nasiruddin as an antagonist to Sly Peter, the local favourite; the Uighur — Beijing’s bête-noire — had given the Chinese the heady taste of

Nasiruddin’s tales; and, then, there is the Arab world: from Morocco to Pakistan to Indonesia, our man is revered by Sufi texts and, equally, made fun of by laymen. This formidable cultural lineage nudged the Unesco to celebrate 1996, apparently the seven hundredth year of the death of Nasiruddin, as the ‘International Year of Nasreddin’.

One of the reasons for this enduring, multi-cultural fascination with Nasiruddin could be his ability to slip past sterile compartments. In the literature that has survived and been embellished, he is foolish and wise, saint and sinner, human and spiritual. This duality, this in-betweenness, appears to be integral to those who, according to Eric Weiner, a student of philosophers and, like Shah, a globe-trotting being, are members of the ‘Legion of the Divine Madmen’. From Buddhism’s beloved Drukpa Kunley to Christianity’s Fools for Christ to the Hindu Birbal and Gopal Bhanr — Shakespeare’s Fool must not be discounted either — each of these occupants of a twilight world, where fact dissolves into fiction, has enriched humanity’s spiritual traditions and, in turn, puzzled mankind with the fluidity of lines that are meant to be a border between the divine and the comic.

Tahir Shah’s father, Idries, a formidable exponent on Sufism and Metaphysics, underscores the importance of the strange in-betweenness of Nasiruddin that prevents him from being appropriated by “spurious” historical traditions. “The Nasrudin stories,” Idries writes, “known throughout the Middle East, constitute one of the strangest achievements in the history of metaphysics. Superficially, most of Nasrudin’s stories may be used as jokes. They are told and retold endlessly in the teahouses and the caravanserais, in the homes and on the radio waves, of Asia [and beyond]. But it is inherent in the Nasrudin story that it may be understood at any one of many depths. There is the joke, the moral — and the little extra which brings the consciousness of the potential mystic a little further on the way to realisation.”

That “little extra” that Nasiruddin offers by way of emancipation could be used to resurrect the liberal enterprise — political and cultural — that has been forced on the backfoot by the rise of orthodoxy in thought and politics. Today, the ‘Mad Mullah’, emblematic of an Islamic fanatic made fashionable by imperial powers, new and old, such as the United States of America and Britain of yore, is a potent, global symbol of theological regression, not progress. Similarly, the vast corpus of enlightened, moderate Islamic intellectual works that is ridiculed by reactionary forces — be it Hindutvavadis in India or dour Wahabbi clerics in Islamic nations — could well be democratised for greater deliberation by using this twinkling, turbaned man on his donkey as a point of entry. As opposed to the denseness of treatise and texts, the razor-edgedness of his humour, his affectionate, all-too-human frailties, the appeal of his own mundaneness — Nasiruddin could well be perceived as the Original Common Man — would be instrumental to the opening up of the collective intellectual horizon.

There is something that Nasiruddin exposes about modern journalism as well. And it isn’t funny.

Journalists, in spite of their supposed reverence for iconoclasts, could do with a bit of help from Nasiruddin in the pursuit of worldly affairs. This is because Nasiruddin had always been in favour of asking questions and, often, challenging the answers that he was given. His tales suggest that he suffered scorn or punishment for his questioning mind quite often. This opprobrium was his — and should be the journalist’s — greatest reward.