Advertisement
Home / Opinion / The very idea of the NRC is wrong

The very idea of the NRC is wrong 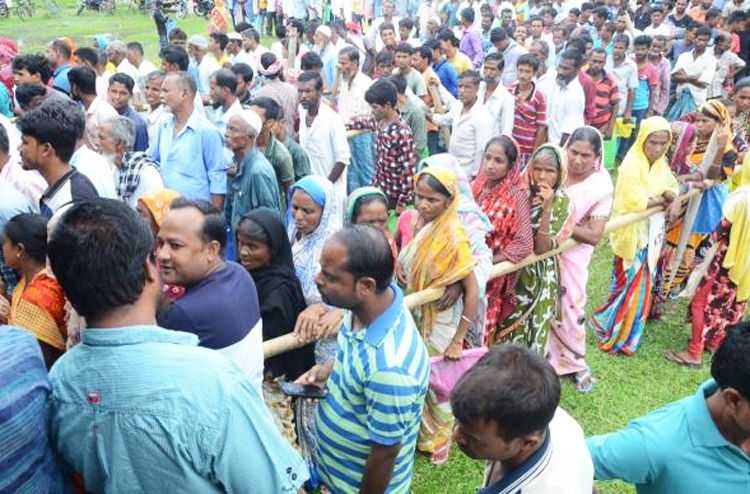 Residents queue to check thier names in the final draft of the NRC in Tengabasti, Assam.
(The Telegraph file picture)
Prabhat Patnaik   |   Published 09.08.19, 03:25 AM

Boris Johnson is no vaishnavite saint; nor is he a leftist internationalist. According to Donald Trump people see him as the “British Trump” and, judging by the cabinet he has picked as prime minister, with a hard-Right home secretary, and the company he kept during the Brexit referendum which included Nigel Farage, the far Right leader of UKIP, he can be safely placed within the right-wing of the Conservative Party. Yet on becoming prime minister, one of his first pronouncements was that there should be an amnesty for all illegal immigrants into Britain who have lived there for 10 years or more.

Contrast this to our situation. A National Register of Citizens is being prepared for Assam, where any person who has entered the state after 1971, or who cannot provide requisite proof, will be declared an illegal immigrant, and face the threat of deportation. Yet, unlike Johnson, no political leader has suggested an amnesty for these non-citizens. Much of value has been written on the arbitrariness of the methods being used to prepare the NRC. The point however is that the very idea of an NRC is wrong.

But this, it would be argued, was part of the Assam Accord and must be implemented. True, but in the immediate relief of reaching an agreement to end the Assam agitation at that time, a promise was made in that Accord which was unworthy; and we should not get trapped by it when its implications, unlike at that time, are clear today.

The question to ask is: what will happen to those residents of Assam who do not make it to the NRC? And there are 40 lakh of them. Deporting 40 lakh people would be an act of unparallelled barbarism reminiscent of the Nazis. Besides, where will they be deported to? If there is no proof of their being Indian citizens, there is also no proof that they are Bangladeshi citizens. How can Bangladesh be expected to accept a sudden influx of 40 lakh persons, when no obligation to accept them exists since there is no proof that they are Bangladeshi citizens?

If they cannot be deported, they cannot also be permanently housed in camps; that again will be an unparallelled act of barbarism, and a pointless one too. Pulling people out of their homes, and from whatever gainful activities they may be engaged in, and herding them into camps, would be a disruptive act, as cruel as it is pointless. This leaves us with a third option, which is neither to deport them, nor to keep them in camps, but simply to do nothing with them, to keep them in limbo, in a state of suspended animation, of permanent anxiety. This again, apart from being cruel, serves no earthly purpose.

Hence even if the non-citizens within Assam’s population are discovered, there is precious little that can be done about them. It is much better to declare an amnesty for them, which means that all those who live within India but do not make it to the NRC should be granted citizenship; and steps should be taken to prevent any further influx.

The problem of immigration into India cannot be separated from the Partition of the country. When people belonging to one land get divided into two countries, it is natural to expect that there would be cross-border explorations of economic opportunities, and hence migration, which the fact of Partition renders illegal. If such migration is to be stopped, then the problem of porousness of the border has to be addressed.

Likewise, if there is a problem with regard to immigrants taking away land from the indigenous population, as reportedly has been the case in Assam, then that calls at best for appropriate legislation restricting land transfers to ‘outsiders’. The point, in short, is to take specific measures to defend the legitimate interests of the local population when such interests are threatened by immigrants; the point is not to threaten suspected immigrants with mass deportation, when such deportation cannot even be actually carried out.

But then, it would be asked, what about the fact that the local population has already been pushed into a corner by past immigration? If these immigrants are to continue in their current habitats under an amnesty that confers citizenship upon them, then why should the local population reconcile itself to this fact? Here I would suggest a sort of Marshall Plan for Assam, like the plan under which the United States of America had assisted Europe to reconstruct itself after the Second World War. Under such a plan the Centre would give grants to Assam of an appropriate magnitude, so that the state can cope with the strain of past migration into it. The exact modalities of such a plan can be worked out, but it would look after the interests of Assam.

Some may object: why should the Indian tax-payer be made to pay, through this mechanism of a Marshall Plan, so that the Bangladeshi immigrants can continue to live as before? The answer to this objection is simple: a nation lives by certain ideals; not carrying out mass deportations of lakhs of poor immigrants must be one of them; and the Father of the Nation would have whole-heartedly approved of it. The nation must be prepared to pay whatever it costs to live by these ideals.

Even the ‘bourgeois’ British State, we should remember, spent millions of pounds for the security of just one person, Salman Rushdie, when Imam Khomeini had issued a fatwa against him for writing Satanic Verses. That was British tax-payers’ money spent for defending a certain principle; and not a single voice was raised against it. The Indian State too must spend whatever is needed for defending a certain principle, of not carrying out mass deportations.

If there is a general amnesty, then the NRC would cease to have any relevance. Its only usefulness then would be to determine the scale on which Assam would have to be recompensed for coping with the magnitude of immigration, which it would reveal.

The Bharatiya Janata Party, alas, is using the Assam situation for its own communal ends. It not only wants to distinguish between Muslim and non-Muslim immigrants, reserving deportations only for the former, but it also wants to extend the NRC to the rest of India. There is no valid reason for either of these moves. The justification given for distinguishing between Muslim and non-Muslim immigrants is that the latter, since they constitute a religious minority in our neighbouring countries, are escaping persecution, while the former are immigrants for gain. But persecuted Rohingiya Muslims escaping from Myanmar are no different from Bangladeshi Hindus. The persecuted belong to all religions.

Likewise, Assam did have a problem of large-scale immigration, which no other state had; so the argument for the second move, extending NRC, also lacks substance. The BJP, however, wants to keep the Muslims in the country in a state of anxiety, and to reduce them permanently to the status of second-class citizens.

This plan must be resisted. A humane solution, possibly on the above lines, must be found to the problem of immigration into Assam which is in keeping with the foundational values of our nation.

Letter to Ranjan Gogoi for help