The trouble with mirror image

As that blurs the distinction between the two sides, the actual casualty is liberal politics 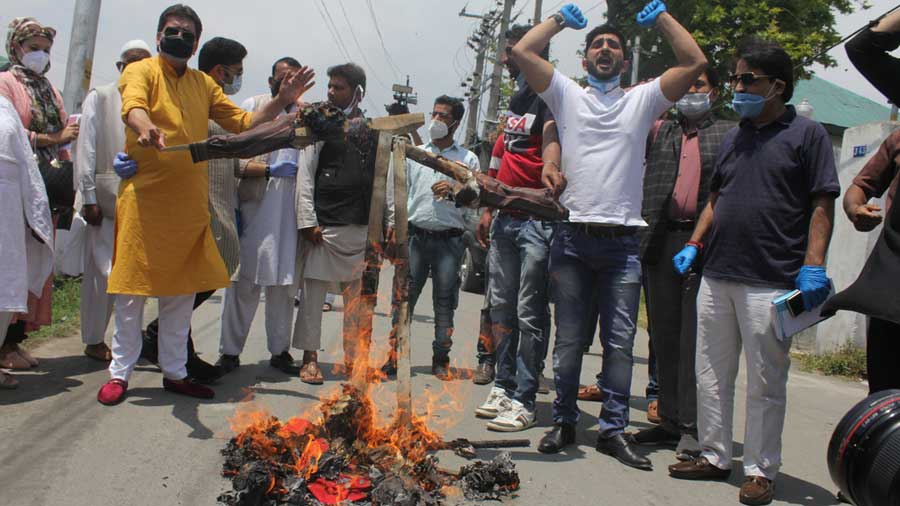 After the Galwan Valley fiasco, right-wing actors evolved their own propaganda of boycotting Chinese products, which complemented the larger narrative of solidarity expected at the time
Shutterstock
Shyam G. Menon   |   Published 20.07.20, 12:22 AM

Since 2013, a major trait in Indian politics has been the marginalization of the Opposition and a growing wish in parts of the electorate to see the Opposition cast as muscularly as the ruling party. In other words, the Opposition needs to become regimented, driven by strategy and capable of swinging opinion this way and that by exerting a hydra-headed self. Anything less may not work.

That is the right avatar as long as the core battle is one for power. What we miss noticing is how one aggressive entity forces another to adopt its image. As that blurs the distinction between the two sides, the actual casualty is liberal politics. The dominant flavour of the country as a whole would then become a muscular mix, worshipping collective and averse to individual freedom. History has instances when the political left and the right have colluded because their natures mirror each other. One good example would be the Molotov-Ribbentrop pact between Nazi Germany and the erstwhile Soviet Union to carve up Poland. That done, they were back at each other’s throats, with the Nazis attacking the Soviet Union and getting beaten by the Russian military and winter.

The dictatorship of both the private sector-State axis and the proletariat-State axis can be stifling. They manufacture the suspicious, surveillance-peddling governments they are notorious for because they know well what they are and the unpopularity they would eventually invite. The Soviet Union is now history. Capitalism is riddled with disease; if it doesn’t disengage from the avarice of its bankers and stock markets, the polarized wealth of its billionaires and the unsustainability of its consumerist excess, it risks breaking up. Communism’s last great citadel is China; a convenient blend of single-party dictatorship and economy. If it wasn’t for the red of communist ideology, China would be every fascist’s dream. No wonder India’s right-wing parties revered China as an aspirational model. Its dominance by single party, military might, economic strength and capacity for orchestrated moves featuring large groups of people converging with single-minded purpose — all this must have been fascinating. Whenever India’s political right found its bid for centralized power and mega GDP questioned, or the cacophony of India’s diversity irksome, it pointed at totalitarian China’s ability to get things done.

The honeymoon lasted till the June 2020 encounter between the armies of the two countries in Ladakh’s Galwan Valley. Notwithstanding leaders from either side fondly admiring the Terracotta Army and the temples of Mahabalipuram, there had been squabbles at the border. But Galwan, as reported in the media, was simply crude. Predictably, the narrative in China was regulated with no mention of casualty numbers — the State speaking in one voice and government-controlled media feigning journalism. The tendency in India has been similar with alterations. There was a call for the State — government and public — to speak as one. We disclosed casualty figures and cremated the dead with honour. Right-wing actors evolved their own propaganda of boycotting Chinese products, which complemented the larger narrative of solidarity expected at the time. The prime minister didn’t speak for some time. The media were independent, but many publications toed the official line over critical approach. It wasn’t entirely Chinese style. But it wasn’t without tactics to regiment a free country either. It harked of what has happened to the Opposition.

The systematic hunting of the Opposition has created the feeling that it takes a hammer of Thor to smash another. To counter a ruling party that loves hyper-nationalism and appears to be backed by hordes advocating such a state of existence, the Opposition has to cast itself as an even bigger saviour of the nation-state. This is what the middle class kept demanding through the last elections and it continues to say even now — there is no monolithic face to the Opposition, no knock-out punches being delivered. They want to see an Opposition that works and behaves like the ruling party; a prize-fighter feared by the competition. The net winner in such a situation is the current ruling party because even if it doesn’t actually rule, its agenda and approach continue to sell, squeezing room for alternatives. It may lose the government but it may change the character of the State fundamentally.

If the same analogy were to be applied to the India-China equation and how we responded to the border confrontation, it is worth asking if one of the things China is achieving now is getting democratic India to behave like the single-party dragon. China is a very insecure dragon, which isn’t surprising because that is the nature of totalitarian States. They know they are mortal and the clock is ticking. There is also something we know from school days. The class bully surrounds himself with minions cast in his image. That way his nature would seem the norm. So do we help ourselves by becoming more like China or less like it? It is human to close ranks when threatened. What can make a difference as we close ranks before a threat is being distinctly different from the aggressor as regards the values for which we are uniting; the values we will protect. When countering a totalitarian State like China, the values we stand for have to be individual freedom and, through it, our inclusive democracy. That way, the reflection won’t be a mirror image. Else we may end up with dragon burning dissent with fire and elephant squashing questions with bulk on either side of a Himalayan fence.