The spectre of fascism is yet to be conquered 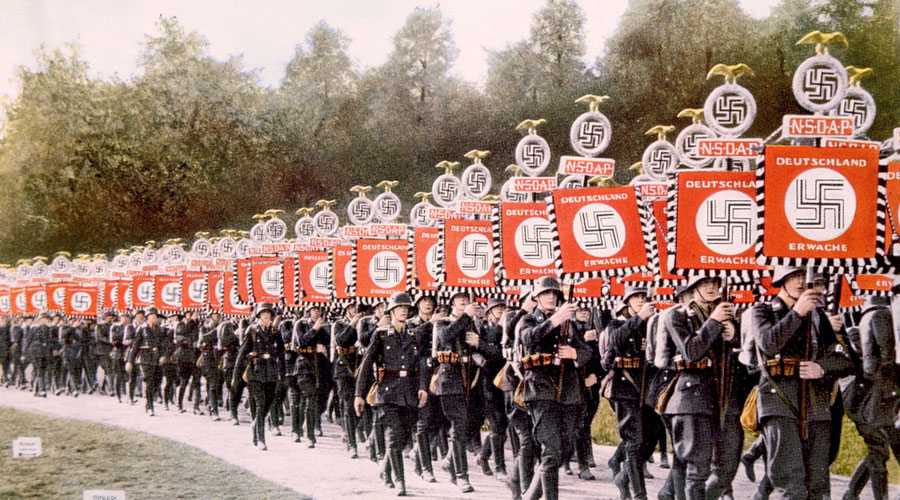 Although Jolly Mohan Kaul wrote that “the ugly face of fascism had horrified almost all shades of political opinion in India,” I can’t imagine a conversation here such as I overheard when staying with the radical Swedish poet, Lars Bäckström, at Uppsala University. A flaming row between the two Bäckström children, not yet in their teens, reached its peak with the little boy pointing an accusing finger at his slightly older sister, and screaming “Fascisti!” It was the most damaging expletive in his vocabulary.

That was half a century ago. The rise of the far right in many European countries plagued by recession, indebtedness, and swarms of aliens, both refugees and immigrants, has made fascism a more familiar phenomenon since then. While, globally, the word has lost some of its pejorative edge, it has almost faded out of India’s political dictionary. Donald Trump’s critics call him fascist. Trump himself thunders against “far-left fascism”. For the lyricist, Javed Akhtar, who thinks Narendra Modi is fascist, “fascists don’t have horns on their heads.” It’s a way of thinking. “And thinking that ‘we are better than others and whatever problems we have, it is because of these people’” makes for fascism. Modi mocked “secularists” at a Calcutta Club debate because they “do not feel secure unless he (sic) is sitting next to a minority person.” He added, cuttingly, “Does he not feel he can be secular on his own strength?” It is revealing that Modi was resoundingly applauded.

Perhaps George Orwell’s 1944 prediction that most people in England would accept ‘bully’ as a synonym for ‘fascist’ has come true more widely. ‘Bullying’ can mean shooting Turks in Germany or lynching Muslims in India, the perpetrators ranging from the German National Socialist Underground to the Kattar Hindut Ekta (Extremist Hindu Unity) and Hindu Ekta Group in northeast Delhi. Yale University’s Jason Stanley described fascism in How Fascism Works: The Politics of Us and Them “as a technique to gain power.” Nowadays, it is more often a technique of using the power that has already been gained by other — usually legitimate — means. Jawaharlal Nehru’s famous warning in Modern Review in 1937 that impeccable democratic credentials are no bulwark against the temptations of Caesarism remains as pertinent as ever. After all, “India has the longest-running continuous fascist movement in the world — the RSS was founded in 1925” according to the historian, Benjamin Zachariah.

Nehru was India’s foremost critic of fascism in pre-Second World War Spain, Italy and Germany. He was one of the few to witness developments there at first hand and his European sensibilities were shocked by what he saw. But even he reneged on his convictions when Indian troops were sent to Egypt, Aden and Singapore in August 1939. Instead of welcoming their role in the fight against fascism, he sponsored a Congress resolution just three weeks before war was declared, reiterating the promise “to assist in no way the war preparations of the British government” until India, too, enjoyed “democratic freedom”. The Communist Party of India was even more uncompromising, not because it championed freedom more ardently but because its mentors in Moscow were faithful to Berlin.

Jolly, who did not join the CPI until April 1940, would have been more understanding of the human tragedy. “I felt that we could not just watch and stand by” was his simple response to the horrors of fascism. He wrote in his memoirs, In Search of a Better World, that the war was “from the very beginning against the fascist threat” and should have been declared an anti-fascist struggle instead of waiting for the Communist International to decide it “had become a people’s war”. Apparently, the CPI’s Ajoy Ghosh shared Jolly’s views but dared not speak his mind publicly.

The main reason for this reticence is that India’s authoritarian culture, with the karta of a Hindu undivided family often exercising absolute prerogatives, is not repelled by dictatorship. The upsurge in continental Europe, including the Holocaust, seemed remote. Even Sally Solomon, a Baghdadi Jew born and brought up in Calcutta, could not relate to the European victims of the Holocaust. As an ICS memsahib and the old Manchester Guardian’s India correspondent, Taya Zinkin concluded that Indians saw no atrocity without a clash of colour: the Japanese kempetai’s brutalities in Malaya or Hitler’s in Poland passed unremarked. One of Israel’s early pioneers told me that he was part of a Zionist delegation that went to see M.K. Gandhi during the war but was rebuffed. The Mahatma wasn’t interested. Undoubtedly, Nazi race theories buttressed by use of the Swastika flattered Hindus whose faith was reflected in Bhagat Singh Thind’s petition for American citizenship on the grounds that he was “a descendant of the Aryans of India, belonging to the Caucasian race (and, therefore) white...” For Quit India activists, Germany was especially appealing as the enemy’s enemy. European fascist leaders were canny enough to conceal their contempt for Indians and exploit that attraction.

We know from diverse sources, including Mein Kampf, that Hitler’s personal opinion of “Indian agitators”, British rule in India and the Indian Legion in Germany was very different from the propaganda diligently churned out by a loyal Indian lobby and swallowed hook, line and sinker by fervent nationalists. We also know that Rabindranath Tagore actively canvassed for an invitation from Mussolini, sought gifts of Italian books and pictures for Visva-Bharati, and asked Rome to pay for visiting scholars. He rejected the suggestion of returning “the magnificent gift from Mussolini, an almost complete library of Italian literature” (Tagore’s words) as a principled gesture. Far from being confused about Italian fascism, Tagore praised Mussolini as “the most slandered man in the world”, the “massive vigour” of whose head reminded him of “Michelangelo’s chisel”.

Strictly speaking, Japan should not be bracketed with Italy and Germany since the motivation was different. But since methods bore some resemblance, there are not likely to be many takers in India if and when the full story of the Japanese 15th army, its sponsorship of the Indian National Army and invasion of India comes to be written. An impartial version would hurt too many fond myths, especially in Bengal where Nirad Chaudhuri claimed the “We want a dictator” chant resonated all through his life. If, to quote Chaudhuri again, “the Bengali revolutionary spouting his ferocity [is] as grotesque as a bloodthirsty sheep”, current events bear out the “worship of authoritarianism in government” that was another Bengali trait. There could be no more apposite illustration of Hegel’s belief that the East knows that only “one is free”, that one being the hero-despot, society’s adulated father-figure. Echoes of the fervour with which Bengalis greeted the rise of Mussolini and Hitler can be heard again. The ‘dictator’ will put everything right.

Meanwhile, Nazi memorabilia arouse no disapproval in India unlike in Britain where a public outcry forced Prince Harry to apologize for sporting a Swastika armband to a fancy dress party. A regular entry in the city’s annual vintage car rally used to be a small Mercedes Benz car out of which tumbled a number of men in uniform with Swastika armbands, their leader with brushed down dark hair and a small toothbrush moustache. No one read any sinister meaning in the little pantomime as they gave the “Heil Hitler!” salute, but then, with Jolly gone (he died on June 29, three months short of his 100th birthday), no one regards Hitlerism as sinister.

Nehru modestly suggested in his Modern Review article that the saving grace was Nehru himself. Despite his immense popularity, impatience with “the paraphernalia of a slow-moving democracy” and occasional dictatorial lapses, he remained the ultimate democrat, “far too much of an aristocrat for the crudity and vulgarity of fascism”. But what of successors who are crude and vulgar without blossoming into full-fledged fascists?