The southern stars: Stalin and Vijayan 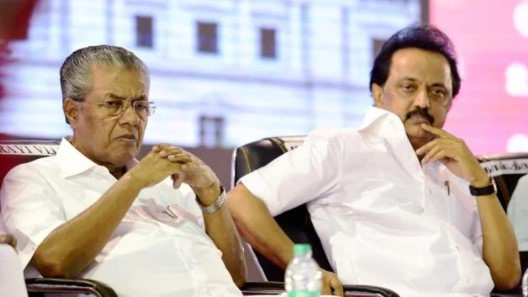 The overwhelming response to Mamata Banerjee’s remarkable victory in Bengal seems to have overshadowed the triumphs of M.K. Stalin in Tamil Nadu and Pinarayi Vijayan in Kerala. However, the return of the Dravida Munnetra Kazhagam to power after a decade in Tamil Nadu and a consecutive second term for the Left in four decades in Kerala are likely to be more decisive for India in the next five years than Banerjee’s win in Bengal. This is because Stalin’s DMK and the Communist Party of India (Marxist) under Vijayan are ideologically more fortified than Banerjee’s Trinamul Congress in their fight against the divisive politics of the Bharatiya Janata Party.

This is not to diminish Banerjee’s feat against the formidable duo of Narendra Modi and Amit Shah. The point is that Banerjee has been a loner in all her battles — be it against patriarchy in the Bengal Congress, growing left fascism in the state under the CPI(M), and now against the BJP. She runs the TMC single-handedly. Very little is known about the organizational set-up of the party. Everything, reportedly, is decided by Banerjee.

Banerjee has been able to rally people around her on her own terms so far. On each occasion, the people of Bengal had a reason to look up to her as a saviour. That may not be the case every time, especially in the coming five years. Therein lies the significance of Stalin and Vijayan. This is where their role in shaping the Opposition’s fight against the BJP comes in.

Stalin had remained under the shadow of his father. But once he took charge, he proved to be a seasoned politician. He led his party commendably in the 2019 general elections. The United Progressive Alliance, led by the DMK, won 38 of the 39 seats. Stalin had come of age. People accepted him not as the son of ‘Kalaignar’ but as the president of the DMK, a Dravidian party that upholds the principles of social democracy and stands for social justice. At a time when the All India Anna Dravida Munnetra Kazhagam was dilly-dallying over the Citizenship (Amendment) Act, Stalin was firm that the DMK would not implement the contentious law if the party voted to power.

In this assembly election, the alliance of the DMK, Congress, VCK and the communist parties bagged 159 out of a total of 234 seats. Stalin has kept his party and the alliance together. This is no mean achievement in the light of the AIADMK playing a subservient role to the BJP. The DMK was also wise enough not to fall into the Hindutva trap laid out by the BJP. When the latter attempted to play the Murugan card by taking out a ‘Vel Yatra’, the DMK leadership remained unruffled.

The CPI(M)’s performance under Pinarayi Vijayan in Kerala has been outstanding, especially since the Left Front was routed in the 2019 general elections. It has bagged 99 of the 140 seats, with the CPI(M) winning 67 seats. The BJP’s attempts to raise the Sabarimala issue were blunted and its lone account in the state assembly closed. Over the last five years, Vijayan has built up the image of a ‘doer’: but he has also earned the moniker, ‘Mundudutha Modi’ or ‘Modi in dhoti’. It is true that Vijayan has an autocratic way of functioning. But perhaps no other chief minister has tackled — effectively — two deluges and two epidemics in five years. Vijayan has led his party’s political battles too, the most important being the one against the CAA. The Kerala assembly was the first to pass a resolution against the Act. What struck a chord with the masses was his ability to bring the Congress around to share the podium with him when the Left held a day’s dharna in the state capital against the law.

With this victory, Vijayan’s stature has risen within the party and the state. But the CPI(M) is wary of the mistakes it made under Jyoti Basu in Bengal where the communists are now without a single MLA. The party is set to replace all its ministers in Kerala, the only exception being the health minister, K.K. Shailaja, who has won accolades for the way she has handled the coronavirus pandemic.

Unlike Stalin or Vijayan, Banerjee is unlikely to reach out to the Congress and the CPI(M) in her fight against the BJP. She will be busy guarding her citadel for the next five years, with the BJP-RSS doing everything to unsettle her. Ideology rather than populism is the need of the hour. The onus is on Stalin and Vijayan to propel a southern surge to combat the BJP’s Hindu nationalism.