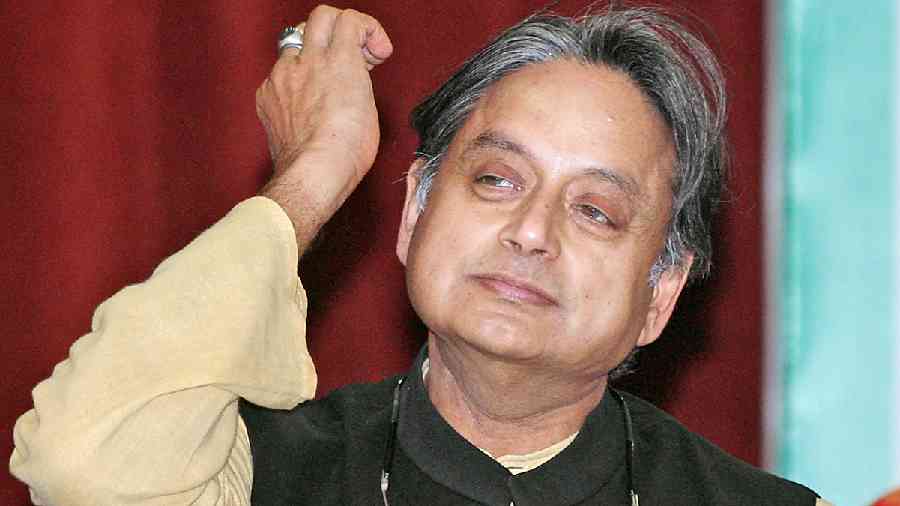 Shashi Tharoor for president. The last time I heard that said was 1974 when Tharoor was campaigning to become the president of the College Union Society at St. Stephen’s. He was eighteen, he wore preposterous mutton-chop whiskers, spoke exactly as he does now, and it was widely believed that he was a shoo-in. And so it proved. I have a black-and-white photograph of Tharoor being chaired by jubilant supporters as they triumphantly marched down the college’s main corridor, holding him aloft.

Tharoor was the kind of student who, in an American context, would have been voted ‘the most likely to succeed’ by his peers. Given middle-class definitions of success in the mid-Seventies, Tharoor’s career fulfilled that early promise. Instead of the Indian Administrative Service, he set his sights on a global bureaucracy and nearly became the secretary-general of the United Nations. When desi fiction in English boomed in the aftermath of  Midnight’s Children’s critical success, Tharoor rode that wave too with his contemporary take on the Mahabharata, The Great Indian Novel.

So far, so conventional. Tharoor was doing exactly what a precocious, high-performing, English-speaking desi was meant to do. I remember coming across his book on Indira Gandhi’s foreign policy in Bahri Sons in Khan Market sometime in the mid-Eighties and thinking, ‘well, that was quick’. His short book on Nehru, his novels riffing on Bombay cinema and communal violence, were all of a piece with the preoccupations of the turn-of-the-century anglophone desi.

It was his political turn in 2009 that made his career trajectory interesting. There had been several instances of English-speaking politicians  taking to parliamentary politics. Most of them, though, chose the Rajya-Sabha route to Parliament. Tharoor’s standing in contemporary Indian politics has a great deal to do with the fact that he has won three successive Lok Sabha elections from his constituency in Thiruvananthapuram.

You might argue that Mani Shankar Aiyar was a kind of proto-Tharoor, with his preternatural fluency, his prior civil service career, his Lok Sabha seat, and his trick of annoying the Congress high command when he let his English run away with him, but the differences between the two men are more important than the similarities. Tharoor is sometimes indiscreet, but he’s never intemperate in the way Aiyar often was. In fact, the grouse progressives have with Tharoor is that he is, if anything, too civil to the Bharatiya Janata Party.

One way of understanding Tharoor as a politician is to see him as an uber Boris Johnson (or to see Boris Johnson as a second-order Tharoor). Both men have a ‘look-at-me’ charisma, they make great play with their hair, they are the very opposite of the anonymous politician, they can produce copy on virtually anything and they are both constantly underestimated as politicians because their narcissism tricks people into thinking that they’re unserious men.

The problem with this comparison is that while Tharoor can out-Johnson Johnson on every metric, his political arena is India not Britain. It isn’t hard to see that Tharoor is made for the Oxford Union but the question is, is he a plausible leader of the Indian National Congress?

The case against Tharoor virtually writes itself. He’s too  angrez to be a successful retail politician in a modern India where Hindi is a prerequisite for pan-Indian presence. He is too savarna to lead the Opposition against the BJP in this post-Mandal era. He has never held a major portfolio as a minister and he has never run a state government. Finally, the scandals that have attended his political career (the IPL allegations, the death of his wife, Sunanda Pushkar) are sometimes flagged as disqualifying.

What is the best case for Tharoor? For one, the fact that across India, large swathes of people know who Shashi Tharoor is. Name recognition is an invaluable quality in a politician and Tharoor has reservoirs of it. At a pan-Indian level, the Congress’s other hopefuls are as candles to Tharoor’s sun. This has something to do with his enormous social media presence, the fact that cameras love him, and the effortlessness with which he can command television time.

Besides, Hindi may not be Tharoor’s first language (we know which language that is) but it is one of his many languages. When he first ran for Parliament in 2009, he was widely mocked as an outsider, dismissed as a deracinated carpetbagger whose Malayalam was so rudimentary that he wouldn’t stand a chance. Given that he has won his seat three times, the last time by nearly a hundred thousand votes, it’s a reasonable assumption that his vernacular skills are up to the task of winning elections. He speaks both Hindi and Bengali and no one should bet against Tharoor turbocharging his Hindi into eloquence if the leadership of the Congress becomes a real prospect.  The idea that language is an insuperable obstacle for someone who speaks five languages is silly. Also, if there is anyone who can make English politically sexy in India, it’s Tharoor.

More interestingly, Tharoor has gone to some lengths to establish his Hindu credentials. He has written a book actually called Why I Am A Hindu, he has trimmed on the Sabarimala question to stay on the right side of orthodox believers and he never loses an opportunity to undlerline the fact that he is a vegetarian believer. In Modi’s India, he has secured his flanks by staking out what passes as the mainstream of Indian politics. He has combined this with being India’s best-known polemicist against the iniquities of colonialism. With his Oxford Union video and his book,  An Era of Darkness, Tharoor has set up shop as scourge of the raj. The net result of this is that Tharoor has reinvented himself as a plausibly Hindu patriot and he has done this with much greater finesse than Arvind Kejriwal and his followers.

It’s important to recognise that Tharoor is campaigning to run the Congress, not the country. His prospects in a general election against Modi make for an excellent parlour game but they have little bearing on his suitability for the present task. And that is to take charge of a political party that has become defunct in the hands of its dynasts and restore to it some semblance of life. His principal opponent, Mallikarjun Kharge, is a formidable politician. A veteran of Karnataka politics, he has also been the leader of the Congress in the Lok Sabha for a whole parliamentary term. For the Congress to make a Dalit its president would be a powerful symbolic move.  But he is also 80 years old and a Gandhi family loyalist, scarcely the best qualifications to lead the Congress into the future.

On the face of it, Kharge is the clear favourite. He has the party’s grandees on his side, even the G-23, the group of disgruntled Congressmen, which had earlier called for organisational reform. The truth is that in any unrigged pan-Indian electoral college that we can imagine, Tharoor would handily best Kharge. If, despite the organisation men, Tharoor pulls off an unlikely victory, the Congress will seem less like a shambling zombie than it currently does. This won’t be a tremendous transformation but it’ll beat being dead. If he doesn’t, the Congress will return to its dynastic afterlife and Tharoor will go back to being the former president of the College Union Society, St. Stephen’s College.