Advertisement
Home / Opinion / The reign of an unchallenged overlordship

Contrasted to the chains trussed around the BJP and government, Modishirts are free to indulge in uncivil liberties 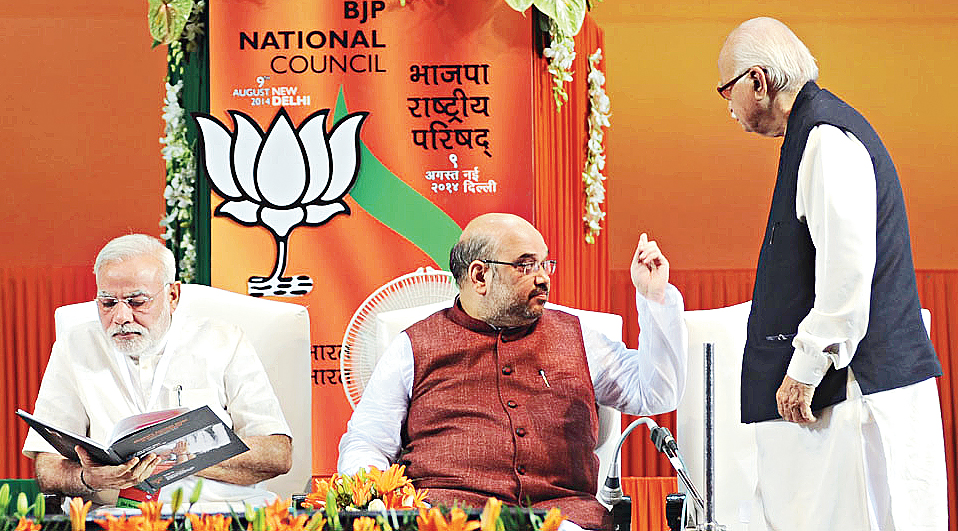 A low shot should no longer be a thing of surprise or unease; applause for a low shot should be. Ravichandran Ashwin has been justly knocked for his unfortunate choice of manner to send Jos Buttler off the field. But then that’s cricket. What’s at play for the trophy of 2019 patently isn’t. So when the prime minister, Narendra Modi, makes a cheap crack, such as the shoddy and desperately conjured “sarab” (when, in fact, he was meaning sharaab) acronym for the challenger alliance of the Samajwadi Party, the Rashtriya Lok Dal and the Bahujan Samaj Party in Uttar Pradesh, it becomes occasion for applause and admiration. Or, when he twisted a student’s question on dyslexia to poke fun at Rahul Gandhi, he drew unseemly peals of laughter. Or, when his tandem mate and Bharatiya Janata Party president, Amit Shah, describes the Opposition as a collective of rodents, reptiles, insects and sundry other species other than human, it passes as if a just standard of political discourse had been set.

The Modi-Shah duo, and their league of minions, has not baulked these past weeks from labelling the Opposition — or indeed anyone that contradicts or questions them — anti-national, even Pakistan supporters or plain Pakistani. If all the Opposition to Modi is anti-national, Modi is probably saying that more than 60 per cent of Indians are anti-nationals, for he only ever got the mandate of 30-odd per cent in 2014.

Such gaudy pomposity is the credo of divisive populists elsewhere too — Donald Trump leaps to mind — and it can only come from a deep abhorrence for democracy and love for personal hegemony. This too is widely applauded, this cultish audacity. And this too should concern us as a democracy. The underpinnings of Modi’s core constituency, or the constituency he has nursed, are deeply cultist and undemocratic — it wants no questioning or contradiction, it wants no opposition, it seeks to secure a mindless submission. This has meant a pronounced othering that goes far beyond the traditional and usual suspects in the Moditva playbook: India’s Muslims. Anybody that will not subscribe and submit to the Modi worldview — prejudiced, petty, pernicious, exclusivist, loutish and analphabetic as it is — is liable to be ruthlessly othered as anti-national or worse. It remains a fortune for India that the so othered by the Modishirts are far more in number. But there are critical ways in which the Modishirts are able to seize the advantage. They are vociferous, while the othered are often not even vocal. Their zeal and resources for bigotry and fakery are far greater; opposing narratives have often seemed bewildered and breathless in comparison.

Modi has, of course paid a price, a willing price it would seem, for building and consolidating this constituency whose outspoken manifesto is majoritarian and dictatorial. Modi, in fact, is proactive chief commissar of the team. Over the past few years unprecedented patterns of an unchallenged overlordship have come to be established, even within government. The Central cabinet, by most accounts, has been rendered a rubber-stamp entity. Most of the prime minister’s seniormost colleagues have gotten used to processing orders and functioning with little autonomy or room. Or the courtesy of information, much less consultation. The horror of demonetization — a single sinful act for which governments would have been punished with ouster by electorates in most democracies — was imposed on the nation without the cabinet being taken into confidence. Cabinet ministers, very often, must also pay heed to Amit Shah’s command and appear at the BJP headquarters to defend this or that allegation or offend this or that rival. The yoking of cabinet ministers as spokespersons on issues unrelated to their work in government is an invention of the Modi-Shah creed. There is no arguing with issued diktat; there is merely compliance, even though it may be, in some cases, a grudging compliance. How each senior member of the Modi government and party was made to swiftly follow suit after the prime minister donned the “Chowkidar” prefix to his social media handles is proof. How Lal Krishna Advani and Murli Manohar Joshi — anointed margdarshaks and sitting members of parliament both — were erased off the Lok Sabha list sans ceremony is proof too. Nobody has shed a tear in the party for the manner in which the two elders have been cast away. Others have found themselves shunted and displaced in the Lok Sabha seat allotment stakes without consent. Nobody complains. Nobody dares; they do as they are told to do, what the boss says no to the party obediently sings no to.

Contrasted to these chains trussed around party and government are the unbridled freedoms granted to the Modishirts to indulge in uncivil liberties. They are allowed to rave, rant, threaten, abuse, twist and tear with an abandon that any democratic people should alarmed at. They have lynched and murdered and celebrated their gory, ignoble trophies with impunity. They have been lauded and eulogized in turn. They have felt free to hand out and take away certificates of who is a patriot or nationalist, who is not. They have considered themselves at liberty to issue calls to bring on unspeakable abomination upon minorities — from ouster calls to downright kill-them calls. They have nakedly and unabashedly propitiated Nathuram Godse, the assassin of the Father of the Nation. They have resorted to flagrant and libellous abuse of both Gandhi and Jawaharlal Nehru, the nation’s first prime minister. They have lobbied with stunning success to have a whole cabal of men and women convicted of heinous sectarian crimes off the hook.

All of it under the benign and obliging gaze of their chief patron. When the horrific mosque massacres in New Zealand left the world numbed, nothing stirred the prime minister, Narendra Modi, to take to Twitter and express the mildest grief; he had the foreign office fax a letter to his New Zealand counterpart instead. His Twitter timeline, his chief messaging tool to his constituency, wouldn’t be sullied by expressions of remorse for victims slaughtered while at prayer in a mosque. Days later, when it transpired that several of those killed were of Indian origin, the tragedy drew a meditated silence; no anguish for that lot. It was a silence for the Modishirts to hear and take note of. Bigotry employed as tool of ballot bonanza. It was also a low shot as any other; the unfortunate thing is there may be, among us, sanction and applause for it.