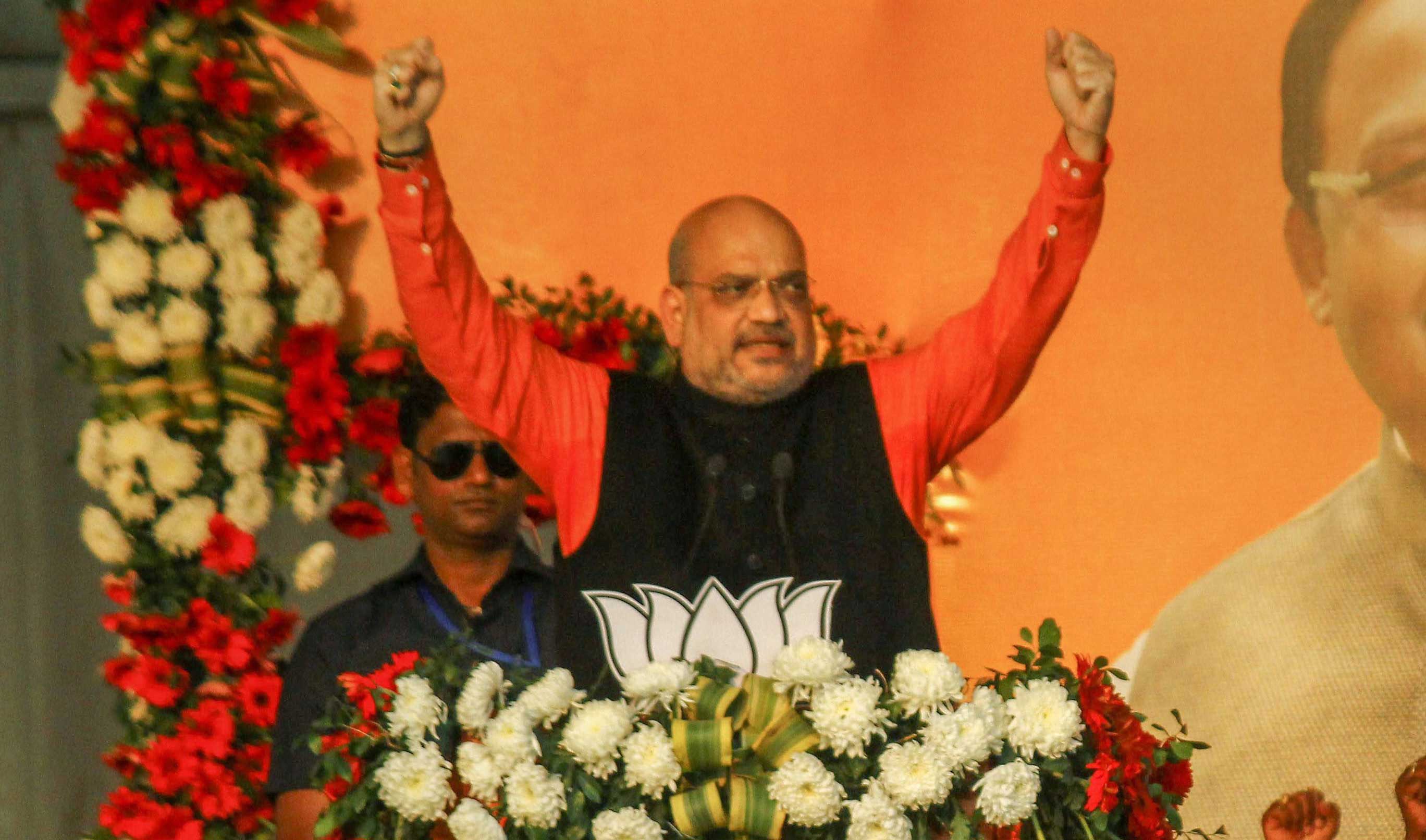 BJP president Amit Shah shifted the focus of his attack from the “failures of the Congress in the last 70 years” to the flaws of “the last 30 years of coalition rule” as the BJP launched its manifesto-preparation exercise on Sunday.

Shah contrasted the current government’s virtues with the failures of coalition rule although the Narendra Modi dispensation, like its NDA predecessor led by Atal Bihari Vajpayee, does lead an alliance despite the BJP enjoying a majority on its own.

Leaving the Modi government out should anyway reduce the phase of coalition rule to 25 years, for it started with V.P. Singh’s National Front government in late 1989.

“For around 30 years, there was the phase of coalition governments. In these 30 years, a large section of the country — almost 50 crore people, 10 crore households — and the general public too, began to feel that our multiparty parliamentary system had failed,” Shah said.

“At that time, the 2014 polls took place. Before that for 30 years, populist policies, appeasement — because of them no long-term plans to resolve the country’s problems were made. No far-sighted tough steps were taken. No decisions to transform the country were taken.”

The major government decisions of the period Shah referred to include the liberalisation of the economy, National Rural Health Mission, rural employment guarantee scheme, right to information, and the eradication of polio. India also successfully defended itself during the Kargil conflict and tested nuclear devices a second time — both during Vajpayee’s rule.

Shah said: “(During coalition rule) the people who had to give directions to take the country ahead were busy fighting for the survival of their governments. As a result, governments were of five years only…. The five-year governments pushed the country backwards for 30 years.”

The UPA regime, though, lasted 10 years: from May 2004 till May 2014. And from 5.5 per cent in 1990, India’s GDP growth rate soared to 11.4 per cent in the first quarter of 2010, compared with 6.6 per cent in 2017.During the coalition era, India gained substantially on the human development index too.The manifesto exercise, called “Bharat Ke Mann Ki Baat — Modi Ke Saath”, will see 300 campaign vans travel across India to collect feedback. More than 7,500 suggestion boxes will be placed in at least 4,000 Assembly segments. The BJP hopes to reach 10 crore people through this exercise.

Manifesto committee chairperson Rajnath Singh said at the launch that the priorities of his party and government were to double farm incomes by 2022 and make India one of the top three economies by 2030. “No one can now take India lightly at international forums. You must have seen in the recent past, when crude oil prices rose, that US President Donald Trump was taken very seriously across the world on one side, and on the other Prime Minister Modi was taken seriously by Opec (Organisation of the Petroleum Exporting Countries) nations. You know that after this, the prices of crude oil fell a lot in the international market,” he said.

Crude prices had plummeted last November because of several factors including the US-China trade war, a massive sell-off of crude oil futures, and forecasts that oil consumption was not going to expand.

Trump had claimed last year: “If you look at oil prices they’ve come down very substantially over the last couple of months. That’s because of me. Because you have a monopoly called Opec, and I don’t like that monopoly.”

Asked about a leaked National Sample Survey Organisation report that estimates unemployment at a 45-year high of 6.1 per cent, Shah retorted that road-building, railways and Mudra loans had created jobs.

“If you restrict the definition of employment to government jobs, such a big country (as India) will never have (enough) employment,” he said.

The NSSO covers all kinds of formal and informal employment in India, though.

Asked whether Bengal chief minister Mamata Banerjee would allow the BJP minivan raths for the manifesto exercise, having earlier foiled the party’s planned rathyatra in December, Shah replied: “This rathyatra is not a campaign, it’s a tour to collect the public’s suggestions. Didi may put restrictions on this too. But we will continue to contact the people; what else can we do?”

He dismissed complaints that the Rs 6,000-a-year dole announced in the interim budget benefits only farmers who own land (up to 2 hectares).

“There are many schemes for them (landless peasants). The government of India has given them homes, electricity, toilets, gas cylinders, a Rs 5-lakh health coverage,” he said.

“They bear no input cost…. The pension scheme for the unorganised sector applies to agricultural workers too.”

Shah insisted that the Citizenship (Amendment) Bill was necessary but added: “The home minister (Rajnath) will consult all the parties of the Northeast (who are opposed to it) and the other parties, one by one, during the Parliament session. If there is a consensus, we will definitely move ahead. The bill is very important for India.”

The bill seeks to facilitate the grant of citizenship to non-Muslim immigrants from Bangladesh, Pakistan and Afghanistan. It has been passed in the Lok Sabha where the government enjoys a majority.