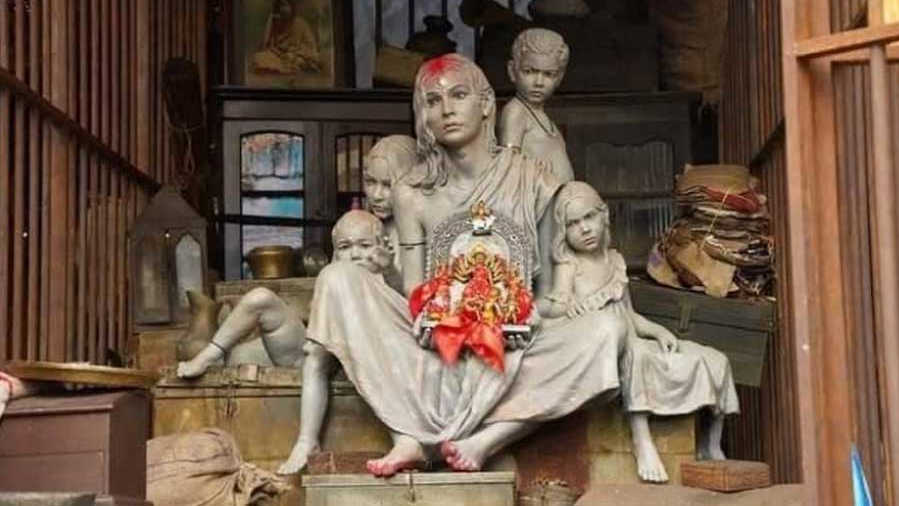 A statue of woman and children hold an idol of Goddess Durga, sit at a detention camp indicating NRC and CAA issues, at a community Durga Puja pandal in Kolkata, Saturday, Oct. 9, 2021.
PTI
Arghya Sengupta   |   Published 21.10.21, 01:27 AM

The evocative idol of Durga as a refugee being transported in a truck together with her children and her belongings is a far cry from Goddess Durga, all-powerful, astride a lion. But this is precisely how Barisha Club in a Calcutta suburb chose to represent her this year during Durga Puja. In a massive installation, ostensibly re-creating a scene at the Indo-Bangladesh border, the club depicted a hapless Durga and her family in no-man’s land. They were scantily clad, clearly having scrambled to put themselves and their meagre possessions into the back of a truck. One of these possessions was a tiny idol of Durga and her children, their last refuge when all else was seemingly lost. Perhaps it was to this idol that they prayed to prevent their fate from going the way of countless other ‘doubtful citizens’ whose pictures hung from the makeshift ceiling of their temporary enclosure.

On the final day of the festivities, I went to Barisha and was struck by the sheer provocativeness of the concept. In relative silence, I took in an idol that unapologetically defied tradition. Having grown up with staple debates of whether the large, front-facing eyes of the idols sculpted by Mohan Banshi Rudra Pal were preferable to Ramesh Pal’s fierce, downward-facing ones, this was very far off-script. It was not Durga as I knew her. But I knew that this was also Durga as she could be, the mother in our midst holding up a mirror to our collective selves.

For far too long, the conspicuous worship of nari shakti during Durga Puja has been in stark contrast to the quiet injustice suffered by women in the country. The child in Kathua, the physiotherapist in Delhi, the farm hand in Hathras, the vet in Hyderabad, the activist in Calcutta, amongst countless other unnamed women, were all brutally raped in the last few years alone. By visually depicting Durga as an ordinary woman in distress, Barisha signifies that we can no longer consistently worship Durga as a goddess while violating the many Durgas in our midst. This is ‘Beti Bachao’ and ‘Kanyashree’ represented together, cutting through our collective hypocrisy in one fell swoop.

At Barisha, Durga, however, wasn’t ravaged by rapacious men or boisterous gangs. The pandal itself represented a detention camp, a concept squarely in public consciousness owing to the ongoing process of counting heads for the National Register of Citizens. Her condition, it was suggested, was a consequence of the politics of division — ‘bhaager ma’, the divided mother, as the pandal creators themselves called it. The inauguration of the pandal by the chief minister, Mamata Banerjee, perhaps the nation’s most strident political opponent of the CAA-NRC, and a subsequent award given to it by the West Bengal government only confirmed what the creators of the pandal would have known, or perhaps even desired — that their political depiction would serve party political purposes.

Much of this is not new. Growing up in Calcutta in the early 1990s, politics was intrinsically intertwined with the Durga Puja. My immediate neighbourhood Puja was known to be organized by the local CPI(M) dadas who, it was rumoured, used part of the collections to fund their party activities. A little further down the road, the biggest Puja at the time in South Calcutta, Ekdalia Evergreen, was always referred to as ‘Subrata Mukherjee’s thakur (deity)’; Mukherjee then being a leading Congress politician. Further afield, it was widely known that Netaji Subhas Chandra Bose had been president of the Bagbazar Sarbojanin Durga Puja, the grand dame of North Calcutta, while also holding the presidency of the Indian National Congress. This was only the tip of the iceberg — the connections between the freedom movement, particularly Bengali extremists, and the Durga Puja are too numerous to recount. Let us not be under any illusion that the conflation of politics and the Durga Puja is a recent phenomenon.

Still, one might arguably make the claim that in Barisha, politicizing the idol itself made political commentary the focal point of the Puja. Entering the pandal, my immediate reflex was not to bow my head and close my eyes in prayer, as I might have in a more traditional setting. Rather, I took in the scene and introspected, as one might at an art installation or any of the other more thought-provoking ‘theme Pujas’ in the city. To me, this wasn’t sacrilege, as some have claimed. Sacrilege assumes a single right way of being and doing things. Neither the Hindu faith nor the Durga Puja has ever subscribed to such a view. Some Durga idols are bedecked in jewellery, others prefer to be in pristine shola; some Asura idols are penitent, others appear vengeful, and while some pandals have Durga and her children huddled together, others give them their own space. Like there is no one way to god, there is no one way to depict god either. Barisha has added to this wondrous palimpsest.

The five days of Durga Puja, despite being the highlight of Bengal’s calendar, have never promised an escape from its reality. After all, the most extraordinary pandals emerge at the most ordinary street corners and the same garbage-filled by-lanes that make us squirm are spruced up to become avenues for the goddess to reach her five-day abode. For these five days, dressed in our new clothes, we all try hard to be better versions of ourselves. As the crowds steadily built up at Barisha and it was time to leave, the refugee Durga spoke to me in the same way as a more conventionally maternal Durga might, urging me to try harder. That voice was not the product of my politics, it was the expression of my faith.