The joys of watching cricket in whites 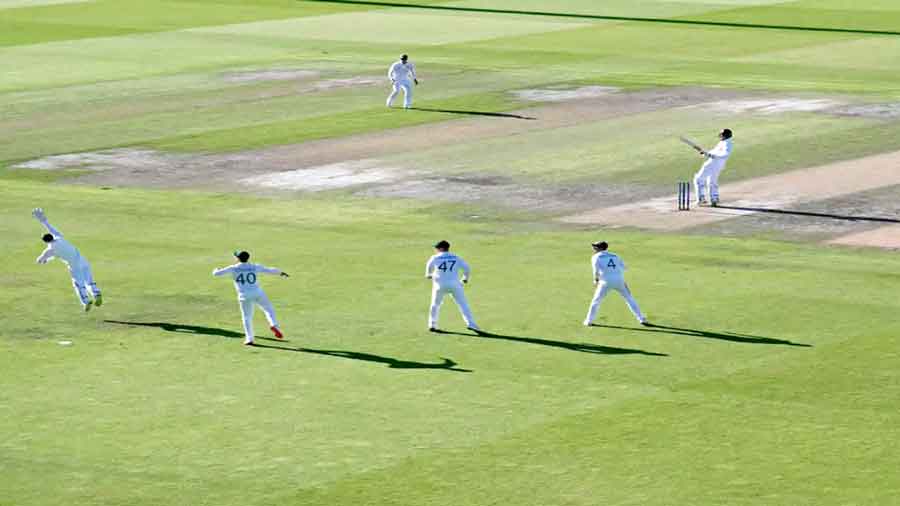 As a member of the Karnataka State Cricket Association, I have free entry to all matches played at the Chinnaswamy Stadium. However, I have never exercised that privilege in the case of the Indian Premier League. More or less my only IPL memory is from the first edition of the tournament, when, dining in a Bangalore restaurant sometime in 2008, I passed the television en route to the rest room and found Shane Warne on the screen. The greatest of all spin bowlers had recently retired from Test cricket and here was a chance to see him afresh. I watched three balls he bowled to Mahendra Singh Dhoni, the last of which had the batsman caught at short mid-wicket, misjudging the length of a ball which dipped late and unexpectedly in the flight.

I did not care to see, live or on television,a single ball of the 2022 season of the IPL. Instead, when in the mood for cricket, I watched, on YouTube, the memorial meetings held for Shane Warne, who died some three weeks before the tournament began. Listening to Mike Atherton, Allan Border, Merv Hughes and Brian Lara talk about Warne was nourishing as well as consolatory, as were the old clips of him bowling on YouTube.

Through the months of March, April and May, it was Warne alone who constituted cricket for me. Then the IPL ended, and real cricket recommenced. I had an academic commitment in the United Kingdom in June, and my visit coincided with a Lord’s Test. That India was not one of the teams made it even more attractive. The older I get, the less nationalistic I have become in sporting matters, and with my own country not playing one could enjoy the Test for aesthetic pleasure alone.

I landed in London on the last day of May. The Lord’s Test commenced on June 3, by which time my jet lag had abated. I didn’t have a ticket for the first day, in which seventeen wickets fell. But I was around for day two, when two unsung New Zealanders, Daryl Mitchell and Tom Blundell, batted bravely in a long fifth-wicket partnership, and for day three, when England made a fine fist of chasing down a fairly large fourth-innings total. I, however, had to miss the fourth day, when England met their victory target with ease.

I know that as an anti-colonial Indian I am not supposed to support England. In fact, I rarely do, but this Lord’s Test was an exception. This was because Joe Root is one of my favourite cricketers. I recall him as a fresh-faced lad of twenty-one, flown out in the middle of an England tour of India to join his side. Root’s Test debut was at Nagpur, a town which in terms of climate and character is as far away from his native Yorkshire as possible. In that match, he played the Indian spinners with calm assurance, helping his side secure a comfortable draw, and so allowing it to win the series by two matches to one. (That remains the last time a touring side won a Test series in India).

In the decade since, I have come to greatly admire Root as a batsman, and as a man. I like the way he gets going immediately on coming to the crease. I appreciate his wide range of strokes (the cover drive and the back cut especially).I warm to his fine fielding at slip, and his ability to unexpectedly pick up wickets with his apparently innocuous off-spin. That he is always smiling, and that he still looks so absurdly young endear him further to me. In that June Test at Lord’s, it was especially nice to see Root, after the torrid time he had as captain, contribute so handsomely to a victory in the first match in many years where he was playing as an ordinary member of the team.

I returned to Bangalore in the third week of June and, having shaken off my jet lag, went down the road to the Chinnaswamy Stadium. Mumbai, winner of forty-one previous championships,were pitted against Madhya Pradesh, who had never won the tournament before. Mumbai, batting first, amassed an impressive 374 all out. In past times, when they had the likes of Padmakar Shivalkar to bowl for them, this might have been enough to win by an innings. I came to the ground after lunch on the second day, and stayed on for all of the third, watching the men of MP bat with courage and resolution.The careful Yash Dubey and the more fluent Shubham Sharma got together in a double-century partnership for the second wicket, before the dashing Rajat Patidar hit a series of scorching drives to take his side to a first-innings lead. I came back for the last session of the fifth day, to watch MP win by six wickets, and clinch the championship for the first time. At play’s end, the winning team’s coach, Chandrakant Pandit, was carried aloft by his wards.

For this match, the weather was as fine as the cricket, and I had the best seats in the stadium (over the sightscreen at the pavilion end). I was on the side of the underdog, not least because, on that very ground twenty-three years previously, I had seen Madhya Pradesh, captained by Chandrakant Pandit, lose a desperately hard-fought Ranji final against Karnataka. Further, my motto in all matters connected with domestic cricket is, ‘Anyone but Mumbai’.

I thought I would write a column in July on these two cricket matches played in whites but, fortunately, I waited, for there was a third treat in hand. In August, I was due back for another talk in England and, once again, my trip coincided with a Lord’s Test. This time, the hosts were playing South Africa. I had tickets for the third and fourth days, but in the event the latter was superfluous. For England, having conceded a first innings lead of around one hundred and fifty, were then blown away by a magnificent display of teamwork by the visitors which saw five bowlers of contrasting styles all contributing. The leader of the pack was Kagiso Rabada, smooth of action and with subtle variations of pace and swing. There were two pure pace merchants, Lungi Ngidi and Anrich Nortje, inducing edges from balls bowled at 90 miles plus at or around the off stump. There was the left-handed Marco Jansen, whose comparative lack of speed was compensated for by his late swing and the great height from which the ball was delivered. And, finally, there was the left-arm spinner, Keshav Maharaj, to hold one end up or provide crucial breakthroughs as required. This quintet was marshalled splendidly by the captain, Dean Elgar, whose artful bowling changes and field placings displayed a leader totally in command of his men — and of the situation.

South Africa has gone through some troubled times recently, both in a political and an economic sense, so it was heartening to see their skills displayed so handsomely on the cricket field. Unlike its predecessors, this particular South African side has no superstars, with the possible exception of Rabada. Nonetheless, they are a first-rate team in which the promise of the Rainbow Nation is still somewhat intact — for the side includes whites of both British and Dutch origin,black Africans, a Cape Coloured and an Indian to boot. Another reason to be happy at seeing South Africa do so well was that the match was played at the ground that — the Narendra Modi Stadium in Ahmedabad with its Adani and Reliance Ends notwithstanding— still counts as the Home of Cricket.

I did not watch a single match — indeed a single ball — of IPL 2022, yet I suspect my cricketing year has thus far been altogether more pleasurable than those who watched every match, every ball, of that benighted tournament.Real cricket is played with a red ball, in whites, over five days, and with no restrictions on how many overs an individual can bowl or a team bat. It is only the longest form of the game that permits the true flourishing of the technical and aesthetic qualities of batting, bowling, fielding, wicket-keeping, and captaincy. As with other Test matches and Ranji Trophy finals that I have watched over the decades, memories of these three games of 2022 will keep me company, and afford me consolation, in the aching years of old age that lie ahead.