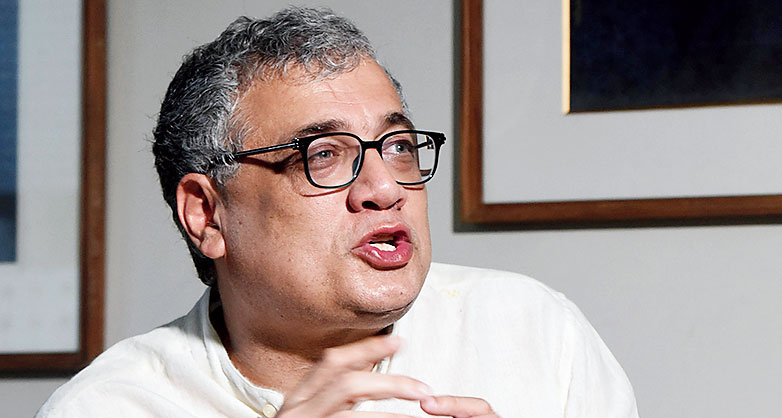 The quizmaster-turned-politician, Derek O’Brien, continues to be gripped by the ‘fastest finger first’ syndrome. During the address of the president, Ram Nath Kovind, to the joint session of both Houses in the Central Hall of Parliament, O’Brien seemed to be racing to score a point. The Trinamul Congress, to which O’Brien belongs, had planned an exclusive protest against the matrix of the Citizenship (Amendment) Act, the National Population Register and the National Register of Citizens. Mamata Banerjee’s party wanted to be separate and different from the other Opposition parties, particularly the Congress and the Left. O’Brien seemed to have been tasked with executing the plan and beating the others to it. While Kovind was addressing the members of parliament, the TMC members pulled out folded pieces of cloth, unfolded them, stood up and held them up. Slogans of “No CAA, No NPR, No NRC” were written on them. The race, however, was to hit the social media platforms first. O’Brien was seen quietly taking pictures and even videos of the protest while remaining seated. A little later he lobbed the phone to a party MP seated a couple of rows behind. This MP, a little later, taking care not to disturb the president’s speech that was going on, rose and walked out of the Hall. The TMC’s official Twitter handle had the pictures of the protest even before the president’s address was over.

Chanakya’s treatise on statecraft, Arthashastra, from the second century BCE appears to have greatly influenced the chief economic adviser, Krishnamurthy Subramanian, during the drafting of the Economic Survey for 2019-20. Chanakya has been referred to by his other name, Kautilya, 15 times in the first volume of the survey, beating ‘the father of economics’, Adam Smith, by a mile. Is the pride of place given to Chanakya and Arthashastra in the survey an indication of the ever-growing writ of the Union home minister, Amit Shah, in the Narendra Modi government? After all, it is no secret that Chanakya is someone Shah holds in great esteem. There are photographs of Shah in his home with pictures of Chanakya and the Hindutva icon, VD Savarkar, prominently placed on the walls — and he apparently even fancies himself to be of the same mould.

Now that Amit Shah has reportedly taken direct charge of the Bharatiya Janata Party’s Delhi campaign ahead of the assembly polls, all development issues seem to have been replaced with the Aam Aadmi Party’s alleged support to the anti-CAA protests. The AAP, which voted against the CAA, first avoided speaking on the issue, and then blamed the BJP for the continuing stir at Shaheen Bagh.

The AAP leader and the Delhi chief minister, Arvind Kejriwal, then charged all parties of ganging up against the people of Delhi to ruin his government’s improvements in education and health facilities, and dubbed the BJP’s pitch as an attempt to turn back the clock on affordable electricity and water. While the BJP flies in the biggies, including the Uttar Pradesh CM, Yogi Adityanath, to up the ante against the AAP vis-à-vis the CAA and the religious minority, the AAP is taking out peace marches in every constituency against a BJP MP who called Kejriwal a terrorist. The Congress is largely playing a spectator sport.

The former state president of the Karnataka unit of the Janata Dal (Secular), AH Vishwanath, who is among the 17 rebel legislators who brought about the downfall of the Congress-JD(S) coalition, is now in the process of penning a tell-all autobiography blaming the Congress for the crisis that paved the way for the BJP to assume power in the state in July 2019.

Having lost the subsequent bypolls, Vishwanath, who has been eyeing a cabinet berth in the BJP ministry, wants to absolve the saffron party of the responsibility of triggering the defections. The announcement came at a time when the Karnataka chief minister, BS Yediyurappa, was set to include the victorious defectors in the cabinet. Party sources say that Vishwanath would certainly want to be in the good books of his new masters in order to be granted a berth despite losing the bypoll. For this, a book would certainly come in handy.

BS Yediyurappa could finally heave a sigh of relief as PC Siddaramaiah vacated Cauvery, the CM’s official residence. Since taking over in July 2019, Yediyurappa has wanted to occupy Cauvery, located next to Krishna, the CM’s office. Siddaramaiah lost power as CM in 2018 but continued to stay in Cauvery as his successor, HD Kumaraswamy, opted for his own private home. Siddaramaiah’s stay got extended even after Yediyurappa took over as CM on account of repairs at his alternative accommodation. Now Yediyurappa wants to quickly move into the ‘auspicious’ official residence that gave Siddaramaiah a full term in office. He expects some of that luck to rub off on him.