'To overcome the massed, malign, forces of Hindutva, we need them on the same side' 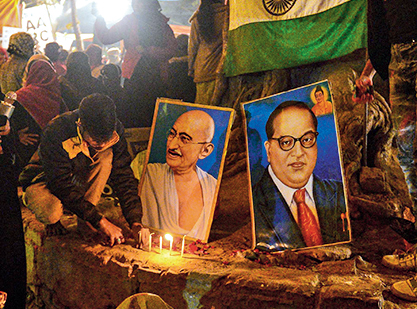 In an interview that he gave last year, the Kannada writer (and activist), Devanur Mahadeva, urged democrats not to view Ambedkar and Gandhi as rivals and adversaries. In the journey towards true equality, he said, they should rather be seen as colleagues and co-workers. Thus, as Mahadeva remarked: “Ambedkar had to awaken the sleeping Dalits and then make the journey. Gandhi had to make the immense effort of uplifting, correcting, changing those who were drowned in Hindu caste religion, in caste wells, to take a step forward. When you see all this, maybe Gandhi would not have traversed far without the presence of Ambedkar. Similarly, I feel that without the liberal tolerant atmosphere created by Gandhi in the wells of Hindu caste religion, then this cruel Savarna society may not have tolerated Ambedkar as much as it did then.”

Mahadeva continued: “If it is our understanding that it is the Savarnas who need to change if India has to liberate itself from caste, then Gandhi is necessary. In the fight for Dalit civil rights, Ambedkar is absolutely necessary. Hence, I say that both should be brought together.”

Mahadeva further observed: “Gandhi calls untouchability a ‘sin’. Ambedkar calls it a ‘crime’. Why are we seeing these as opposites? It is wise to understand both of these as necessary.” (Mahadeva’s words have been translated into English by Rashmi Munikempanna).

I recalled Devanur Mahadeva’s remarks when seeing posters of Ambedkar and Gandhi being displayed together at student protests in Delhi. This was rare, if not unprecedented. For it is much more common to see Gandhi and Ambedkar being celebrated separately. Indeed quite often they are placed in opposition to one another.

In the past, it was usually admirers of Gandhi who saw these two great Indians in adversarial terms. In the 1930s and 1940s, Ambedkar had often used polemical language to attack Gandhi and his ideas. This outraged Congressmen, who could not countenance any criticism of their beloved Bapu. They responded by characterizing Ambedkar as an apologist for British rule, damned him for serving on the Viceroy’s Executive Council during the Quit India movement of 1942 and so on.

In recent decades, it has more often been Ambedkarites who have critiqued Gandhi. They have seen his attempts at reforming the caste system as weak-kneed and half-hearted. They have charged him with patronizing their hero (during the Poona Pact and after), and criticized Gandhi‘s political heir, Jawaharlal Nehru, for not using Ambedkar’s talents and abilities adequately in the years that the two served together in the first cabinet of free India.

In states such as Uttar Pradesh and Maharashtra, attacks on Gandhi by Dalit intellectuals have been intense and unrelenting. In Karnataka, however, subaltern writers have taken a broader view. In his superb book, The Flaming Feet, the late D.R. Nagaraj urged us to see the work of Ambedkar and Gandhi as complementary. The work of undermining the caste system and of delegitimizing untouchability required both pressure from Dalits themselves — which Ambedkar provided — and from upper-caste reformers — which is what Gandhi represented. Nagaraj was a friend of Devanur Mahadeva’s, and the two must surely have exercised a reciprocal influence on one another.

Whether or not they know of their work, the students of Jamia and the women of Shaheen Bagh substantiate the large-hearted analysis of Nagaraj and Devanur Mahadeva. Like those two thinkers of Karnataka, these brave protesters of Delhi admirably urge us not to posit Ambedkar and Gandhi as rivals. Rather, they urge us to view them instead as colleagues, whose legacies need to be brought together in the struggle for democracy and pluralism.

After a recent visit to Shaheen Bagh, the Delhi-based writer, Omair Ahmad, noted, in a long and most interesting Twitter thread, that among the reasons that there were more posters of Ambedkar than Gandhi on display was that, as he put it, “people have moved from thanking a leader for winning freedom, to thanking a leader who gave them tools to assert their own rights as free citizens”.

On reading this, I wrote to Omair Ahmad saying: “I agree (and retweeted) but with one caveat, that when it came to the promotion of Hindu-Muslim harmony, no Indian (not even Nehru) matched Gandhi. But that is a point of detail. More broadly, it is wonderful to see Ambedkar and Gandhi invoked together, rather (as we have become accustomed to seeing) than being placed in opposition.”

To this Ahmad responded: “I very much agree, and deliberately phrased it in that way not only to contrast the contributions, but also to show that they were complementary.”

Ahmad further observed: “The leaders of that time had their differences (and failings), and it’s okay for people to choose which appeals more to them personally, but this necessity to pull down one in order to praise another doesn’t appeal to me very much.”

The countrywide protests against the Citizenship (Amendment) Act have been impressive in many ways, not least in the mass participation and leadership role of women. In this respect, too, the invocation of both Ambedkar and Gandhi, together, is apposite. Ambedkar in particular had a thoroughgoing commitment to gender equality, as reflected not just in the Constitution whose drafting he oversaw, but also in the reform of Hindu personal laws that he pursued so vigorously. While in private life — as in the treatment of his wife — Gandhi could be a traditional Indian patriarch, in the public sphere he contributed substantially to the emancipation of women. Thus Gandhi was instrumental in Sarojini Naidu being made president of the Indian National Congress in 1925, at a time when it was not remotely conceivable that a major political party in the supposedly advanced democracies of the West could have a female leader. And among the women activists inspired by Gandhi were such exemplary figures as Kamaladevi Chattopadhyay, Usha Mehta, Mridula Sarabhai, Anis Kidwai, Subhadra Joshi, Aruna Asaf Ali, and Hansa Mehta.

Ambedkar famously asked oppressed Indians to “educate, organize, and agitate”. The agency and courage which students and women have displayed in the protests against the CAA is entirely in the spirit of Ambedkar’s call. Meanwhile, the defence of democracy and pluralism against Hindu majoritarianism resonates strongly with Gandhi’s lifelong struggle for inter-religious harmony.

That the threat posed by Hindutva compels us to bring Ambedkar and Gandhi together is also underlined by Devanur Mahadeva. Thus, in his interview Mahadeva had remarked: “We should also listen to the words of Varanasi’s 16-year-old boy: ‘I will stand with Gandhi in Godse’s country.’ Otherwise, any kind of fundamentalism will first pluck out the eyes of one’s own, making them blind. After that, brains are ripped out depriving one of any rationality. Later, the heart is taken out making one monstrous. And then a sacrifice will be asked for. This is increasing today. We have to save our children’s eyes, their hearts and their brains from the jaws of fundamentalism immediately. It is better if young Dalit women take Gandhi to task after the wandering Gandhi-killer Godse’s ghost has achieved moksha. If this awareness is not there, I worry that the danger will hit at the very roots of the Dalits.”

To be sure, neither Ambedkar nor Gandhi were infallible. They made mistakes, harboured animosities and prejudices. One must not invoke them mechanically, nor follow them blindly. We live in a radically different world from the one they inhabited. The political and technological challenges of the third decade of the 21st century are very different from the political and technological challenges of the middle decades of the 20th century. However, the moral and social challenges remain broadly the same. The battle for caste and gender equality is unfinished. The struggle for inter-faith harmony remains vital and urgent. To overcome the massed, malign, forces of Hindutva, we need Ambedkar and Gandhi on the same side.