Advertisement
Home / Opinion / The poison within

Every society has its own ways of normalizing evil 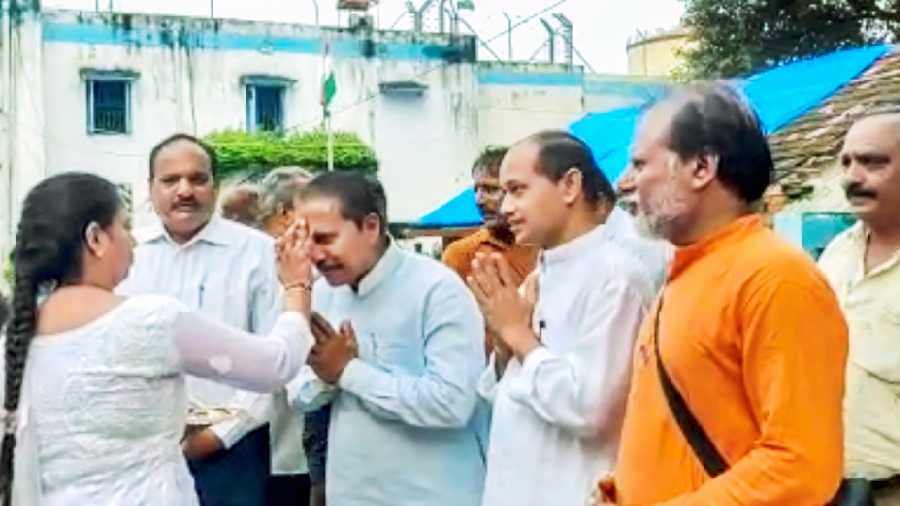 People convicted in the Bilkis Bano case being welcomed as they are released from the Godhra sub-jail, August 2022
Sukanta Chaudhuri   |   Published 05.09.22, 03:18 AM

Let me be the nth Indian to profess that the release of eleven convicts in Gujarat has shaken my customary pride as a citizen. I am not competent to disentangle all the legal knots of the situation. But one thing seems clear: there was no absolute compulsion to release them.

Guidelines passed by the state of Gujarat in 2014 and the Union government in 2022 expressly forbid remission for rapists and murderers. (The crimes in question, if we need reminding, are gang-rape of five women and fourteen murders. The victims included a three-year-old child and a day-old baby.) The 1992 guidelines enjoined by the Supreme Court for this case are silent on the subject. That left the review committee free to refuse remission, in the spirit of the current stand of both Union and state governments, even if they were not bound by the letter. It was their sole decision not to do so.

Let lawyers debate other points that lawyers have raised. Was the trial judge consulted? or the Union government? Was it correct to refer the case to Gujarat rather than Maharashtra where the original trial was held after the Supreme Court opined that a fair trial was not possible in Gujarat? If the whole process is finally judged to be in accord with the law, that would be the direst outcome of all. It would indicate that our legal system does not offer citizens sufficient protection and solace against monstrous crimes.

Ultimately, laws are only as good as the ambience in which they operate. Let us start with the decision-makers. A senior official explained that all parameters were considered before granting remission,  including the nature of the crime. What unthinkable wrongdoing, one wonders, would be denied remission under this magnanimous regime? A committee member extolled the convicts (whose guilt,  pace the court, he took leave to doubt) as Brahmins of good sanskar. India and the world bristles with Brahmins’ associations. Not one has protested that their sanskar deplores rape and murder.

The drama now unfolds. The men were garlanded and fed sweets as they emerged from custody. In TV debates, right-wing lawyers have admonished us not to get emotional over Bilkis Bano’s suffering, even as they bemoaned the ‘fifteen long years’ the convicts spent in jail.

The real question, however, concerns the wider public. After Nirbhaya’s ordeal, the whole country rose in revulsion. The Hathras affair inspired something of the same outrage. The popular response this time is relatively muted. There are indeed protests across India. Calcutta has seen several meetings and rallies, as have other cities. But by and large, those protests have not passed beyond activist circles into the general consciousness. Does that make the greater Indian public complicit in the evil?

Some dulling factors are obvious. The crimes occurred twenty years ago. Those twenty years have been scarred by continual horrors, numbing our sense of outrage. We react to new atrocities as to an earthquake or cyclone: natural, inevitable, not unduly disturbing if it doesn’t happen close to home.

This particular sequence is sufficiently remote from the life of the articulate classes. While Nirbhaya might have been any girl going about the city, Bilkis Bano’s predicament is not shared by the urban middle class. ‘We’ need implicate ourselves only insofar as we wish to indulge our social conscience. That is laudable, but it does not focus the mind to anger and resistance in the same way.

We can scarcely cavil at this lack of connect. It is an inevitable — and merciful — factor in all protest and activism by the more fortunate orders. Today, however, a new sinister development straddles the social gap without closing it. However remote (indeed exploitative) in class, wealth and lifestyle, a section of the privileged has struck up a majoritarian kinship with a large swathe of the masses. For this alliance, the excluded minority is alien, incompatible: the enemy, the Other. Those beyond the divide, like Bilkis, can expect neither justice nor human bonding from this solid front of their notional fellow-citizens. The latter’s silent support is for her tormentors.

We cannot tell how many Indians have been transformed in this way, and to what varying degrees; but without doubt, it has happened massively. We cannot say the malady infects ‘otherwise’ responsible and decent citizens: it is seen as a hallmark of such citizens. Everyday episodes set off alarm-signals, reflecting the outflow of poison on TV and the social media. I recall a gratuitous, breathtakingly communal remark by a grandmotherly lady standing in a queue; the uncontrolled rant of a civic-minded neighbour walking home from the market; WhatsApp messages among a residents’ group, tilting at a community absent from the neighbourhood.

If asked whether they support gangrape and child murder, these worthy citizens would vehemently demur. But somewhere deep down, they regard these crimes as regrettable excesses in a good cause. And among them, impossible to tell apart, are an unknown number who themselves commit such acts in thought if not in deed.

The philosopher Hannah Arendt talks of “the banality of evil”. It is a mental state where people do evil without being overtly evil: ordinary people so conditioned, from the “inability to think from the standpoint of someone else”. Inhumanity thus becomes admissible for power, gain or popularity: to win votes, to please the boss, to bask in a glow of communal identity. The price paid by others for this gratification is beyond such a person’s comprehension.

Arendt finds this pathology in fullblown form in the Nazi war criminal, Adolf Eichmann. But the virus lurks in everyone everywhere. Every society has its own ways of normalizing evil. In India, we are perfecting a major new strategy to that end, subsuming many time-tested ones.

No citizen is safe in a polity where evil is so casually internalized. Even within the majoritarian fold, we readily become someone else’s Other and adversary, exposed to a fellow-human’s hatred and violence for one reason or other. The poison endangers us all.