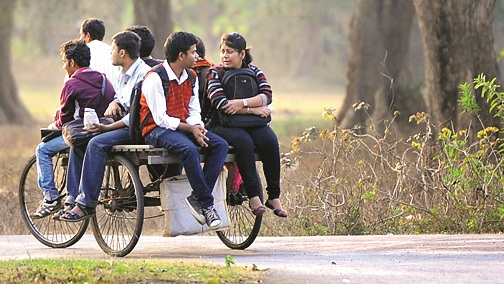 The great college dropout act is all set to lose its radical appeal. For generations now, dropping out of college has been the frontier to striking dares, be it incubating start-ups in Silicon Valley, running away to join movies, slouching towards Varanasi to seek hash and a guru. The list, infinitely expandable, is about to die the saddest death an iconoclast can get. It is about to become an icon itself, tamed and domesticated at the shrine.

Is the traditional college about to die? The murmurs grow stronger each day. Lawrence Wong, the education minister of Singapore, has recently declared that the conventional model of “a fixed period of education and then a fixed period of work” is “no longer relevant today”. He sharpens a tune already in the air. The ‘open loop university’, developed in 2014 by Stanford’s design school as a way of reimagining the college experience, gave students admitted to college six years to use however and whenever they wished to. They could start college whenever they felt they were ready — be it eighteen or twenty-four, pull out after two years, work for a few years, and then loop back into college. No matter where they lived when they were looped out, the students could use the remainder of their six-year college period to re-matriculate in their thirties, forties, or fifties.

College, fragmented, has now found its way to India. The National Education Policy 2020 has introduced its “multiple entry and exit” policy with which a student can enter and exit college at multiple points, with appropriate credits stored in the very instrumentally titled ABC, or Academic Bank of Credit. Even if they begin at the beginning, they can graduate college at the end of one year with a “certificate”, at the end of two years with a “diploma”, at the end of three years with a “Bachelor’s” — although the option best ‘recommended’ by the NEP remains the four-year multidisciplinary programme with a research component.

One who might have just been a college dropout in a former life now looks well-positioned to hold a “certificate” or a “diploma”. In this world, Steve Jobs and Bill Gates would forego their iconoclasm, trade it for a certifying taxonomy based on the number of classes they might have waltzed in and out of. In this world, not finishing college will be a challenge — whatever you do, you get a brand.

But if only Silicon Valley success were the default result of college attrition! School dropouts in India are among the most painful consequences of poverty, and, thanks to the vicious cycle, of lack of education. Early marriage for girls and premature entry into the labour force for both sexes keep our schools far emptier than they should be. But dropouts have been far more contained in higher education, perhaps not surprisingly so as getting access to college education itself requires the crossing of a significant privilege divide in this country. The dropout rate in Indian Institutes of Technology was just 1 per cent, according to figures released in Parliament by the minister of education. And it has been decreasing too — it fell from 2.25 per cent in 2015-16, while for the Indian Institutes of Management, the rate fell from 1.04 per cent in 2015-16 to 1 per cent in 2020. Likewise, the dropout rate in universities went from 7.49 per cent in 2015-16 to 2.82 per cent in 2020. ‘Dropouts’ in these statistics are defined by those who do not complete the full period of study — in the current formulation, three years for general stream courses and four years in some professional streams.

This data will change once the ‘multiple exit options’ is adopted by institutions. Early exits won’t be called ‘dropouts’ anymore; they would leave with their various appellations. But in essence, the percentage of students leaving college after one or two years will inevitably shoot up. What we now call dropouts would, in effect, be legitimized, and a far larger section of students would have very good reasons, even incentives, to take early-exit options.

So can we expect more Bangalore/Gurgaon start-ups, greater glory for incubators and angel investors, bolder actors who’ve escaped the confines of college, liberated sports stars, artists and writers who were choking on the walls of syllabi and lecture halls? No doubt we’ll see some of these. At first glance, it also makes economic sense for poorer students, who might find quicker, more strategized, paths to employment. There might also be students who will, through the ominously titled ABC, bank their credits and return to institutions later in life to add to their qualifications.

But seriously? Don’t we know what will happen to the majority of students? The poorer ones will simply take the early exit options, perhaps the poorer the earlier, while students from more privileged backgrounds stay back and reap the longue durée college experience. Scholarships will be a paltry band-aid as, for students from disadvantaged families, they merely offset the cost of studying but offer no real substitutes to professional income, which students forego as long as they stay in school, funded or not.

Multiple striations of lateral apartheid already lash the higher education landscape in India — from elite institutes of engineering and posh private colleges in metro cities to far-flung places in the country where teachers barely show up and academic sine die is the norm. The new system will institutionalize this apartheid along a new axis: those who’ve had some college, those who’ve had more, and those who’ve had the most. In a deeply stratified country like India, it’s anyone’s guess how the difference will play out, between richer students with a longer trajectory of college, and (often, invariably) poorer ones with shorter trajectories. Returning to college later in life as a non-traditional student — doesn’t that too, more often than not, depend on social and educational privileges already in the community?

Barring a few dedicated professional tracks such as law and medicine, it is almost impossible to predict the relationship between learning acquired in college and the real expanse of one’s working life. What matters in the long run is the experience of college itself, irrespective of course content. A significant part of this experience is the web of social relations one develops while in college, which, in turn, become foundational for future relationships and, indeed, one’s eligibility for them. It’s an open secret that the real value of an Ivy-League education is the membership to an elite club — of a network of alumni that opens doors from the White House to Wall Street and beyond. IITs, IIMs and elite colleges have been serving the same function here in India ever since Independence.

College, truncated — never mind how we credential the act — will segregate this essential social experience even further, entrenching the position of the ‘longer-educated’ over those who take early leave. The day is not too far away when a group of well-heeled alumni of the full college experience will forge networks and mergers over drinks, casting a moment to remember the name of their sharp but poor classmate from first year who left early to take a job. But the name will slip past all memory. Another round of drinks will be ordered. They will move on.