The NEP is a recipe for unenlightened over-centralization 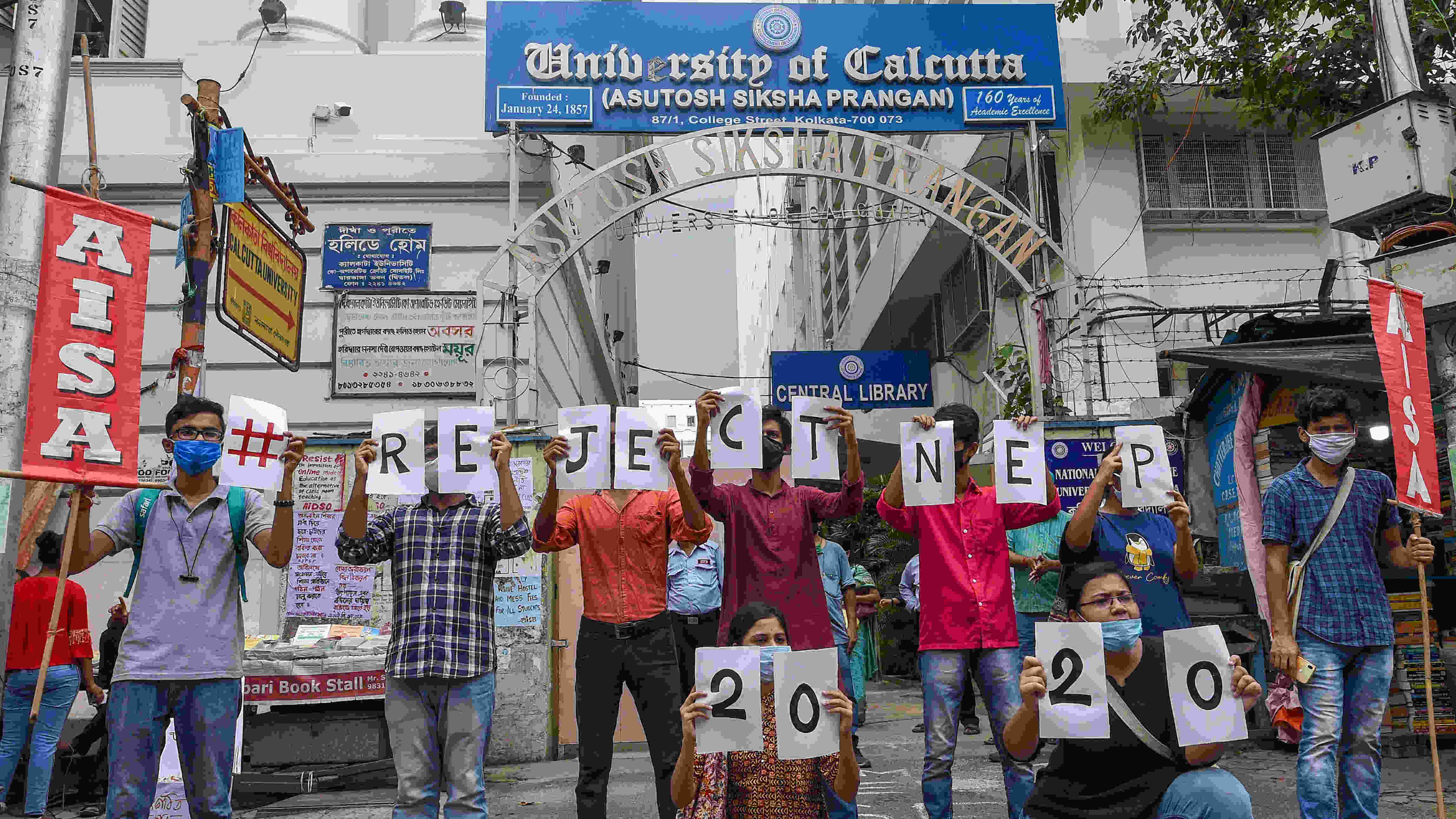 The new education policy comes cloaked in pious platitudes and ostensibly progressive pronouncements. It is only by peeling away the layers of obfuscation that we get a clear insight into the ways in which it is poised to blight the future of our younger generation. The announcement of the policy bypassing Parliament and any real consultation with the states is one more brazen and cynical attempt to advance the ruling configuration’s ideological agenda under the cover of Covid-19. It is a recipe for unenlightened over-centralization.

The policy contains some acceptable prescriptions, which one would expect in any twenty-first century reformulation of perspectives on education. The choice of the mother tongue as the medium of instruction in primary school, the move away from the rigid bifurcation between arts and science streams in high school, a measure of flexibility in changing subjects in a four-year college education and a presumption that there should be something universal and not narrowly technical about universities are among the less contentious features of the policy. However, English should be taught as a second language at the primary level even while having the regional language as the medium of instruction. An entire generation in Bengal suffered as a consequence of the Left Front government’s short-sighted decision to do away with English in primary school. We cannot afford to repeat that mistake at the all-India level.

Despite bandying about the phrase, “graded autonomy”, the policy leaves no room for genuine autonomy of academic institutions and threatens to extinguish federal autonomy in the domain of education. Properly a state subject for nearly three decades after Independence, education was moved to the concurrent list during an authoritarian interregnum in Indian politics. The new policy bears all the over-centralizing impulse of the current regime in New Delhi. It leaves inadequate space for the reflection of the diversity of India in curricular content at any level of education.

The worst feature of the National Education Policy is the provision for a single regulator of higher education. Much will depend, of course, on who gets appointed to this all-powerful body. The present government’s record gives rise to the legitimate fear that it will be packed with the regime’s favoured ideologues rather than bona fide educationists. The proposed central regulatory body is invested with all-encompassing authority without mechanisms for consultation and coordination with any state regulatory body that states may choose to establish or with their departments of higher education. The establishment of this single regulator should be vigorously opposed in Parliament and non-BJP ruled states should set up robust state regulatory bodies to contest the imposition from the Centre.

Even though medical and legal education are to be left out of the scope of the single regulator for higher education, the Central government’s interventions in medical colleges have alienated most thoughtful members of the medical fraternity. I introduced a private member’s bill in the 16th Lok Sabha to govern national law universities but was unable to engage the interest of the treasury benches in such an urgently needed measure.

Another retrograde measure is the policy’s prescription of a common entrance exam for admission to higher education institutions by a national testing agency. Standardized exams such as the SAT and GRE in the United States of America have been shown to be biased against disadvantaged social groups and are increasingly being discarded or ignored by the best colleges and universities in their admission decisions. Different states and individual institutions must have full autonomy to determine what weight, if any, to give to a common entrance exam at the all-India level in their admission processes. The new national curriculum framework for ECE, school, teachers and adult education promises to be another stifling straitjacket.

The spectre of privatization inherent in the new policy has raised widespread concern and for good reason. It offers nothing to stem the rot of commercialization of school education that has been damaging to both quality and equity in many states. The policy advocates “common norms” for public and private higher education institutions. While there are examples of outstanding not-for-profit private universities around the world (I happen to teach in one), for-profit private universities have been unmitigated disasters everywhere. There is need for a new and separate law in Parliament specifying the requirements for being accorded the status of not-for-profit higher education institutions. Since that prospect is unlikely, states should legislate on this matter. States should also amend their laws governing state universities so that governors, who are these days no more than political agents of the Centre, do not automatically serve as their chancellors. Distinguished educationists belonging to the state should be appointed chancellors.

The policy exhibits muddled thinking on the internationalization of education, which if properly done would raise standards. I have been watching national channels showing footage of Harvard as they trumpet the government’s decision to welcome foreign universities. I know for a fact that Harvard is opposed in principle to opening campuses outside of its location in and around Cambridge, Massachusetts. Only a handful of the top one hundred universities in the world are likely to show any interest in having campuses in India. Many more can be engaged through intellectual partnerships. The emphasis in the internationalization of education should be on giving Indian institutions the autonomy to attract talented international faculty and to welcome foreign students. Our universities should be far more cosmopolitan than they are at present. They should look east and not just towards North America and Europe.

The old and tired promise of increasing public investment in the education sector to “reach 6% of GDP at the earliest” is repeated in the new policy. It was meaningless on the part of the government to announce the policy without an accompanying, clear, time-bound roadmap to attain this level of public investment. Achieving national professional standards for teachers will remain a pipedream without massive investment in teacher-training. The policy declares the good intention of having a gender inclusion fund, which should form part of the repertoire to eradicate deeply ingrained gender-based discrimination. In singing the praises of the NEP, Narendra Modi has revealed his Manuvadi predilections. We must acknowledge and address gender, caste and class-based discrimination and exclusion through resolute and verifiable affirmative action in admissions and appointments at all levels. The current public health crisis has exposed the yawning digital divide in access to education; this shameful inequality and injustice must be addressed urgently through public investment and delivery.

The Opposition would do well to challenge the substance of the new education policy instead of getting mired in the defense of the old nomenclature. There is no reason to mourn the impending removal of the jargon-laden phrase, ‘human resource development’, from our official lexicon. We should not reduce the nurturing of human capability to the level of exploiting material resources. Education and health must be the two pillars on which to rebuild our national edifice that must rest on a strong federal foundation. A top-heavy structure is bound to collapse. For the next four years, regional parties in power at the state level must bear the responsibility of safeguarding the future of our young citizens.