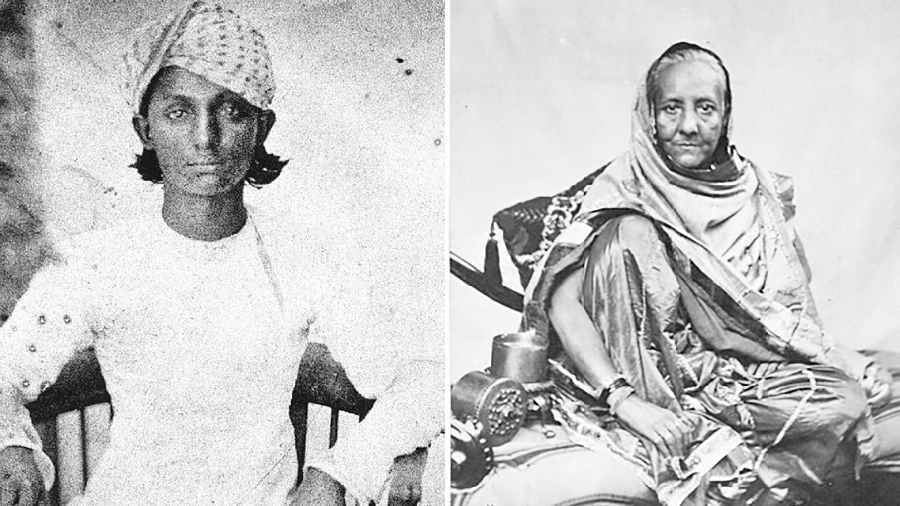 Mirza Jawan Bakht (left) and the only surviving photograph of his mother, Begum Zinat Mahal, in Rangoon (right)
Sourced by The Telegraph
Uddalak Mukherjee   |   Published 25.05.22, 02:55 AM

Aandhis — violent squalls raising dust and smoke — are quite common at this time of the year in the northern parts of India. Historians say that one such aandhi had been sighted in the month of May — the eleventh of May to be precise — in Delhi. William Dalrymple gives an account of it in The Last Mughal — through the eyes of Bahadur Shah Zafar, India’s Last Emperor. Zafar, Dalrymple writes, had finished his breakfast and was reciting his prayers at the Red Fort’s tasbih khana: “As he rose, leaning on a stick, he noticed that in the middle distance to his left, beyond the meandering river at the far end of the Bridge of Boats, a tall pillar of smoke was bellowing out... More ominously still, the far bank of the Yamuna was cloudy with rising dust...”

This was a storm like no other. For the light of the sun had been dimmed that May morning by the dust raised by the approaching sepoys who were headed towards the Red Fort after raising the banner of the Revolt in Meerut.

A conflict so layered and complex as the Revolt of 1857 has, understandably, fascinated — and divided — the fraternity of historians over decades. The enduring split is best captured by the spirited debate in the House of Commons in July 1857 between Benjamin Disraeli and Lord Palmerston, the then British prime minister. Disraeli accorded to the uprising a nationalist character while Palmerston dismissed it as a military mutiny. This differential interpretation resonates in the war of words that continues to rage among historians of all stripes, of all times. For instance, John W. Kaye’s A History of the Sepoy War, written seven years after that tumultuous era — it detailed the phases of the Revolt — was described curtly by Shahid Amin as yet another instance of history of the “English-under-fire”. Many Indian historians and ideologues — V.D. Savarkar being an example of the latter — challenged this imperial historiography, striving to spot in the Revolt the embers of a fledgling nationalism, even though Savarkar’s interpretation of nationalism was deeply problematic. Meanwhile, early Marxist historians, such as M.N. Roy, shunned this rose-tinted frame to argue that the violence was the manifestation of a bitter contest between an ascendant commercial capitalism and a decaying feudal edifice.

The erudite wrangling led to enrichment, not impoverishment, of the history of the uprising. In post-Independent India. R.C. Majumdar and S.N. Sen produced voluminous accounts. But both, in the words of a critic, ignored a key constituency — the peasantry — a social segment that historians were forced to confront by Eric Stokes’s seminal  The Peasant Armed: The Indian Rebellion of 1857, a strand that was further consolidated by Rudrangshu Mukherjee’s examination of the popular resistance in Awadh through the interesting prism of peasant-talukdar interdependence. Old history on 1857 has continued to be challenged by new: in the first decade of the twenty-first century, K.C. Yadav and N. Rajendran expanded the spatial arc of the Revolt, raising searching questions about the assumption that the seismic turbulence of 1857 had left large parts of the subcontinent undisturbed.

In a markedly ahistorical society, the lay reader has been usually left untouched by these epistemological shifts. But one way of stimulating the ordinary — uninformed — reader about the nuances of the Revolt has been through biography, a genre that the historian, Srinath Raghavan, described, in a fascinating talk with Ramachandra Guha titled “History and Biography”, as anathema to many distinguished historians. This is not to suggest that biographical accounts of the principal actors of 1857 are rare: historical biographies of, say, Lakshmibai, are not uncommon. Historians like Mukherjee have even attempted — strikingly — to juxtapose characters — Lakshmibai with Hazrat Mahal, the queen of Awadh — to examine the different fates of their after-lives. Yet, there exists a credible argument that over the years, historical research on figures associated with the uprising have demonstrated an unmistakable attraction for the well-known protagonists.

What, then, about those relegated to the footnotes of 1857’s history?

For instance, Dalrymple’s text mentions, only sporadically, the fate of Shah Zamani Begum, the wife of Mirza Jawan Bakht, the son that Zinat Mahal, Zafar’s young but influential wife, wanted to place on the Mughal throne. “As a young girl of no more than ten Shah Zamani Begum had paraded gloriously through the streets of Mughal Delhi on elephant-back to marry her Mirza Jawan Bakht.” But history and, with it, her life took a tragic turn soon after. After the Revolt was crushed, Shah Zamani Begum survived the British purge on the royal family and found herself in the retinue that travelled with Zafar to his banishment to Rangoon. After Zafar’s death, she found herself sharing a hovel with her husband who had turned alcoholic. British correspondence reveals that the lady had been forced to pawn her clothes and ornaments to feed her family. By 1872, wrecked by poverty, depression, melancholia and incarceration, the begum had turned blind. Again, the colonial discourse, typically, described Jawan Bakht as boorish. But is that all there is to this prince who died aged forty-two? Should not the historian be interested in interrogating a character that was built and broken by forces beyond his control: internecine rivalry, political turmoil, the purge of family members — “twenty-nine sons of the royal house were… put to death” — and, later, by the ignominy of penury and exile, all within a life lived for four decades?

How should one view Shah Zamani Begum, Jawan Bakht and countless others, prince and plebian, who are marginal to this theatre of conflict as India celebrates the 75th year of the fruits of the second war of independence? Should they elude attention — scholarly or otherwise — simply because of their lack of agency in the upheaval even though their chequered existence offers rich insights into the larger social and structural conditions that shaped personal lives and their intimate choices?

In his talk with Raghavan, Guha, citing Eric Hobsbawm’s classic, Bandits, makes a singular point: historians should incorporate cameos by the occupants of history’s margins for two significant reasons. First, predominant characters attain a wholeness, a sparkle, when examined in the light reflected off ‘minor’ players. So a deeper study of the young begum, in spite of her minimal presence in historical analyses, could offer clues about her illustrious relatives and their predicaments.

The second, perhaps more important, point concerns biography’s ability to humanise history. This humanisation — the insertion of the fragile human element into a post-mortem of social conditions — Guha argues, could widen the reach of history within the general readership. This, in turn, has a vital consequence. Given the depredations on history by this elected regime, resistance — 1857 was one — is inconceivable without democratising history’s appeal and access.

Begum Zamani, history says, became blind. But what would Zamani have to say about history’s blindness?