The Indo-Pak ceasefire agreement must be viewed differently 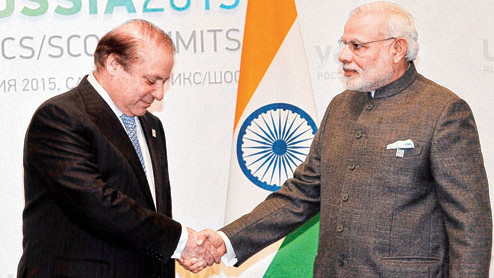 Coincidentally, I wrote in these pages last month on the forthcoming 20th anniversary of the Agra summit. The February 25 joint announcement of the Indian and Pakistan militaries on an agreement to enforce the 2003 ceasefire on the Line of Control was certainly as much of a surprise as the invitation from the then prime minister, Atal Bihari Vajpayee, to General Pervez Musharraf to visit India for a summit meeting two decades earlier had been.

Much like the situation before the Agra summit, the current agreement comes at the end of a long and particularly tense period. Major terrorist attacks (Uri, Pulwama) and strong Indian military responses (surgical strikes, Balakot) were one aspect of the period from 2016 to 2020. Alongside, the bifurcation of Jammu and Kashmir into two Union territories and legislative changes with regard to Article 370 led to a super-charged public opinion and a diplomatic storm in Pakistan.

The net result — and even before the pandemic had consolidated its hold in South Asia — was a closure of trade and cross-border movement of people, a virtual freeze of cultural contacts, and a substantive reduction in the level and size of the respective diplomatic representation in either country, along with a host of other negatives. There were, alongside, regular exchanges of fire, often fierce with high-calibre weapons, along the LoC. The ceasefire of 2003 seemed buried pretty comprehensively.

In the India-Pakistan context, diametrically opposed and entrenched positions are hardly new. Even so, the position by the end of 2020 seemed especially chronic. Pakistan’s stance was one of ‘nothing doing’ until the restoration of Article 370 as well as a rolling back of the legislative changes of August 2019. In India, the government and a significant section of the public seemed to have firmly coalesced to the position that ‘terror and talks cannot go together’. Démarches and polemics constantly ricocheted off each other in what now appeared to be — some feared, others hoped — a new normal in India-Pakistan relations.

So when the joint announcement of February 25 came, the bemusement among many was inevitable. Diehards on both sides married to the elusive grail of consistency pointed to the abandonment of principle and a maverick approach. Thus, some in India wonder if the latest step forward is a harbinger of other initiatives and, if so, what happens to the principled position on the cessation of terror before diplomatic engagement? In Pakistan, similarly, some ask that if a broader engagement is to also follow, where does this leave Pakistan’s demand that the August 2019 ‘annexation of J&K’ be reversed first?

Alongside its numerous negatives, the history of India-Pakistan engagement has also, however, a characteristic redeeming feature: naysayers are unable to hold up agreements to move forward. This is so notwithstanding the generally accepted notion that chances of success in such engagement are low and numerous trip wires exist to derail an incipient process. The impulse to break the mould of hostility and strategic mistrust has coexisted, even if uneasily, along with the numerous divisive issues of the India-Pakistan portfolio. Thus even as the negative milestones of the  post-2016 downturn are listed, major initiatives, such as Prime Minister Narendra Modi’s unannounced visit to Lahore in December 2015 or the opening of the Kartarpur visa corridor, also stand out as contrarian events that buck the general trend.

There is the inevitable speculation about what precisely led to this announcement of adhering to a ceasefire agreement otherwise in tatters. Some explanations point to the need of both India and Pakistan to better position themselves vis-à-vis the new administration in the United States of America. Others have suggested India’s mounting concern over a real two-front conflict — with China and Pakistan — actually materializing and, therefore, the necessity to seek some easing of tensions on both fronts. Conversely, Pakistan, now that an India-China softening is underway, would certainly not like to be left alone with a ‘hot’ LoC. Alongside these speculations, there are others — military hardware on both sides, on account of the wear and tear, requires respite; the economic challenges that loom ahead for both countries; the quiet role of the Gulf states and so on.

The search for such explanations is itself based on the premise that something very unusual has happened for which there has to be some direct and objective reason. What this approach overlooks, of course, is that crests and troughs comprise the natural rhythm of the India-Pakistan history. These cycles, in fact, have overridden ideological, political and institutional divides in both countries. For example, over the past quarter-century, virtually the entire political spectrum of both countries has either been in government or been the supporter of the government of the day in one way or the other. All the principal actors of the present and past have thus been participants in the crests and troughs of India-Pakistan relations.

In India, the election to power of the current government was seen by many as the harbinger of a new and muscular approach on all matters concerning Pakistan. While this may well have happened, what is overlooked are the efforts, often in parallel, to reach out to strike a positive balance, beginning with the invitation to the then prime minister of Pakistan, Nawaz Sharif, to attend its first swearing-in. Similarly, there is a view both in India and in Pakistan that military interventions in Pakistan’s polity act as a setback to any India-Pakistan stabilization. There is a kernel of truth in this, but the fact is that the Pakistan military has also been an entity with which progress has been made by Indian interlocutors. The current initiative regarding the ceasefire thus cannot be easily explained by the view that post Nawaz Sharif no major step forward was to be expected given the fact that the army was effectively back at the helm in Pakistan.

The point, perhaps, is also that in so heavily securitized a relationship, there is a natural cynicism built into the positions on both sides. This cynicism naturally breeds a fundamental conservatism in approaching the bilateral relationship. Political initiatives then remain the major way by which logjams are broken. These initiatives are moulded not by considerations of bureaucratic precedent or of being consistent with earlier positions, but through larger assessments of national and political interest. The present agreement with regard to enforcing the ceasefire has to be seen in this context — possibly both sides came to the conclusion that the status quo, with a high level of military and political tension, was no longer in their interest and had, in fact, become counterproductive.

What lies ahead? The India-Pakistan landscape is littered with failed initiatives. The dangers that exist are well known — whether from political turbulence or terrorist attacks. The differences in the respective positions of both sides are as stark as ever. Perhaps the public health crisis that engulfs us will, in fact, provide elements for a more stable platform to be constructed. But, in sum, if diplomacy is again going to be the platform for future dealings, that is a positive development and must be supported and nurtured. If it can ease the intensity of future crests and troughs, that itself will be no small achievement.

The author is a former High Commissioner to Pakistan and is currently Director General, Indian Council of World Affairs