The Hindutva concept of ‘nationalism’ is essentially non-accommodative

The corporate-Hindutva alliance, which underlies the BJP government, is centralizing 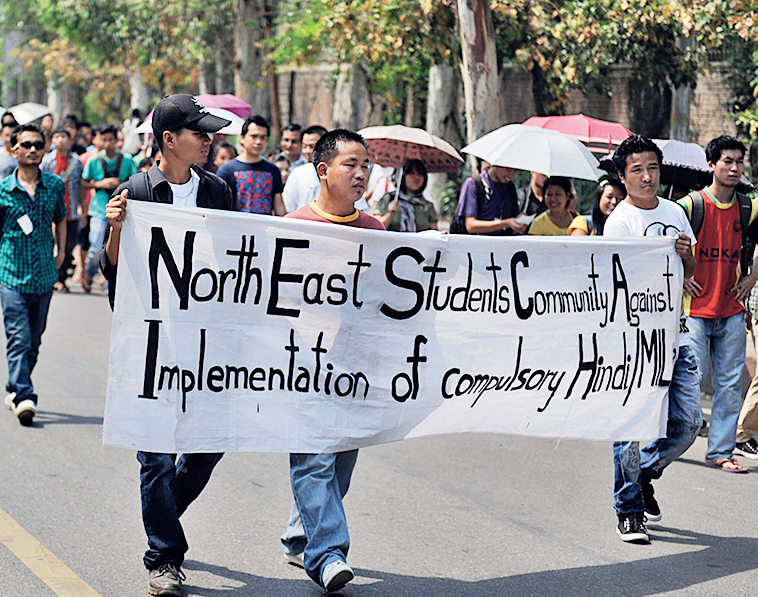 The BJP government promotes centralization because both its pillars of support, namely Hindutva and corporate capital, are in favour of it.
(The Telegraph file picture)
Prabhat Patnaik   |   Published 06.11.19, 07:17 PM

Anti-colonial nationalism had sought to be inclusive. This was necessary for uniting a diverse people to fight an imperial power whose relative strength derived precisely from this diversity. Uniting people of such diversity in turn required discussions and negotiations, between the proponents of the anti-colonial, pan-Indian nationalism, and others belonging to different social groups, and regional-linguistic communities, like the Bengalis, the Odias, the Tamils, and the Malayalis, whose formation dated back to a period even before the Bhakti movement.

The promise of a federal structure in the Constitution of a free India was one key outcome of such discussions. Having special provisions like Articles 35A, 370 and 371, even within this federal structure, to respect the sensitivities of particular regions was another. All these features were meant to aid the formation and nurturing of the nation. The nation in short had to be forged; it did not exist already and could not emerge fully-formed like Minerva from the head of Jupiter.

The late Amalendu Guha used to talk of a dual national consciousness characterizing a modern Indian, a pan-Indian consciousness which existed alongside the consciousness of being a Bengali, an Odia, an Assamese, or a Tamil. A delicate balance had to be maintained between the two if the nation was to survive. Any excessive centralization, he used to argue, or any move to override the linguistic-nationality consciousness by exclusively emphasizing the pan-Indian consciousness, would produce its opposite, a tendency towards separatism and secession. Countering such separatism through the use of force by the Centre would be ruinous for the country, as it would unleash a destructive dynamic. The delicate balance between these two different levels of the State, which underlay our dual national consciousness, must not, in short, be upset in any way.

This, however, is precisely what the Bharatiya Janata Party government has been doing. A grotesque example is the unilateral abrogation of Articles 35A and 370 in the case of Jammu and Kashmir, which violates a solemn assurance given by the Indian Constitution to the people of the state. Even more grotesque is the Centre’s decision to bifurcate the state into two Union territories, a fate that can now befall any state which incurs the Centre’s wrath. The Centre, in short, has unleashed the dreadful dynamic mentioned earlier, whose first symptom is the utter repression let loose in the Kashmir Valley and whose sequel will tragically unfold in the months to come. Indeed, those celebrating the Centre’s move in Jammu and Kashmir will one day rue their glee.

But the tendency towards centralization under the BJP government, towards upsetting the delicate balance mentioned earlier, is far more pervasive than just its decision on Jammu and Kashmir. Amit Shah’s plan of imposing Hindi all across the country is another instance; though kept in abeyance for the moment owing to intense opposition from Tamil Nadu, it has not been abandoned and continues to remain on the government’s agenda.

The argument may be advanced that the introduction of Hindi is meant only to displace English from its current hegemonic position, and the English-speaking elite from its current position of dominance. This, however, is only a fig-leaf. As the draft National Education Policy which had mooted the idea of introducing Hindi compulsorily everywhere, and against which the agitations in Tamil Nadu were first aimed, itself makes clear, there is little scope at present for teaching science (or social science for that matter) in any language other than English. And if teaching continues to be in English then it can hardly be supplanted from its current position. The emphasis on Hindi therefore would serve to replace not English but the regional languages.

The BJP government promotes centralization because both its pillars of support, namely Hindutva and corporate capital, are in favour of it. Hindutva’s concept of ‘nationalism’ is the very opposite of anti-colonial nationalism. It is not an inclusive, accommodative nationalism, as the latter is, built up from below through negotiations that allow for recognizing the specificities of particular groups or regions through special provisions. It does not believe in forging a nation, rather it believes that the ‘nation’ already exists, like Minerva inside the head of Jupiter. All that is needed is to make it appear; and if anyone raises questions about whatever does appear, then that person or group must be ‘anti-national’.

This concept of ‘nation’ is not just anti-minority which it obviously is; it is also anti-federal, and anti-democratic (since the essence of democracy, as Amartya Sen, quoting Walter Bagehot, emphasizes, is “government by discussion”). The Hindutva concept of the ‘nation’, it follows, is necessarily of a highly centralized entity.

Corporate capital too wants greater centralization, which explains the centralizing tendency in the realm of the economy even under the United Progressive Alliance. The UPA might have been free of the Hindutva baggage, but it was neo-liberal; hence the observed tendency towards centralization of decision-making and resources, which corporate capital prefers, as it does not then have to deal with a whole range of state-level politicians and officials.

The coalescence of corporate capital and the State which characterizes our current regime reaches its culmination when the State is a centralized State. It is noteworthy that the goods and services tax, which constitutes a powerful measure of centralization and has been demanded by corporate capital, had been planned under the UPA, though introduced by the National Democratic Alliance.

Corporate capital may not have any interest in Hindutva per se, and hence in the specific concept of the ‘nation’ championed by the votaries of Hindutva; but that makes little difference, for it finds in Hindutva a useful tool to beat down any opposition to its own hegemony and also to usher in centralization in those spheres which are of interest to it. The corporate-Hindutva alliance, in other words, which underlies the BJP government, is essentially centralizing.

This explains the BJP’s agenda of one nation, one leader, one party, one language, one tax and even one round of elections. The nation will be of the Hindus, where the minorities will be the ‘enemy within’; the party will be the BJP in an ‘Opposition-mukt Bharat’; the language will be Hindi all across India; and the tax of course will be the GST.

This agenda not only runs counter to that of anti-colonial nationalism, but will set off the destructive dynamic mentioned earlier. This agenda permits tactical concessions to this or that social group, or this or that region at election time; but that is different from making institutional arrangements to safeguard the interests of those groups. Such tactical manoeuvres must not be confused with an accommodative nationalism; the Hindutva concept of ‘nationalism’ is essentially non-accommodative.

This destructive dynamic is beginning in Jammu and Kashmir, where, once the response of the population ceases to be muted, the extent of repression will only escalate, setting off a vicious spiral. When such a vicious spiral has started, it will engulf the rest of India too, where any criticism of the unleashing of this dynamic will be dubbed ‘anti-national’ and crushed. To imagine either that the people of Kashmir will remain cowed down forever, or that democracy can continue in the rest of India while Kashmir is being repressed as at present, is foolhardy.

What sets BJP apart is its endorsement of exclusion