The Great Game in Myanmar 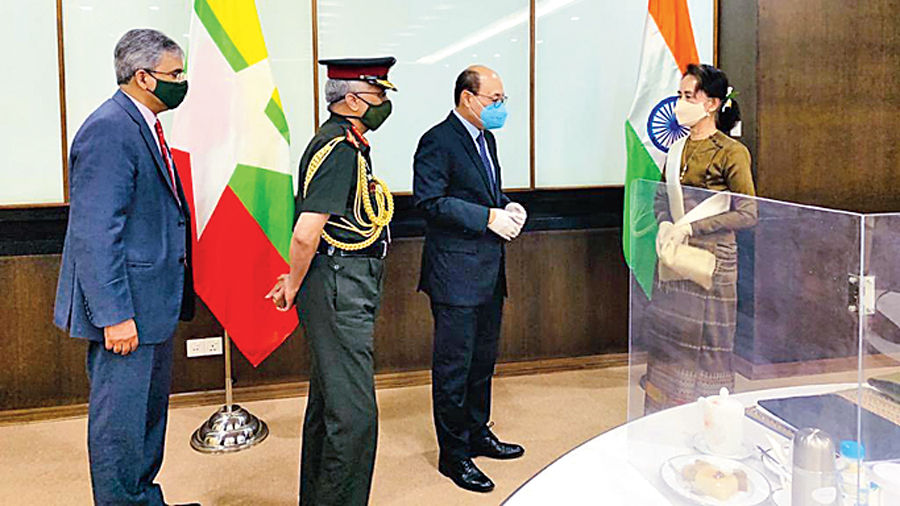 After her landslide victory in November’s elections, Aung San Suu Kyi and her government are destined to become part of a regional ‘tug-of-war’ for influence centered around China’s growing sway in the country. Tokyo is leading the charge to wean Myanmar away from Beijing. But New Delhi is also hoping to exert influence in the ‘Great Game’ centered on Myanmar, especially in the light of the deterioration in Sino-Indian relations over the past year. With the imminent changing of the guard in Washington — with a more outward looking Joe Biden administration taking over — the United States of America can also be expected to re-enter the fray.

Fresh from its overwhelming victory in last month’s elections, Myanmar’s ruling party, the National League for Democracy, now faces enormous challenges — rebooting the country’s flagging economy, worsened by the pandemic and the international recession, and pressing on with its economic reform programme; tackling Myanmar’s pressing need for constitutional reform, and regenerating efforts to finally end decades of civil war. Invigorated by its electoral success, the NLD has clearly indicated the policies and priorities it intends to pursue in the next five years, building on the solid foundation laid down in the past five years with renewed energy and political commitment.

Most analysts and diplomats believe that the government’s key policy directions will not change substantially; instead they will be deepened, strengthened, and concertedly implemented in the coming months. There is already a new sense of urgency in government circles in Naypyidaw and feverish activity in the administration as it prepares its strategy and vision for the incoming government’s first 100 days. One of those policies that are expected to experience nuanced change is foreign policy, especially in relation to Myanmar’s neighbours.

Five years on, the regional and international architecture have also changed significantly, with the impact of the Covid-19 pandemic likely to have a lasting effect on foreign relations — especially trade — in the coming decade. It will necessitate the Myanmar government to re-evaluate its policy priorities and its relationships. Meanwhile, the Myanmar government has not been short of suitors. The outcome is likely to be a significantly new, nuanced approach to its foreign relations.

In the lead up to Myanmar’s elections last month, there was a flurry of diplomatic activity — largely behind the scenes — as the region’s major powers all sought to curry favour with the country’s civilian leader, Aung San Suu Kyi, as well as with the powerful army commander-in-chief, Min Aung Hlaing. There was a parade of important visitors through the capital, Naypyidaw, as politicians and senior diplomats from the region’s key nations, especially China, India and Japan, engaged in a quiet battle for greater influence in Myanmar post-election. Other important Asian players, notably South Korea and Thailand, also launched equally significant initiatives.

As the State Counsellor, Aung San Suu Kyi, prepares for the next five years in office, her government is restructuring its foreign policy priorities around its key concerns: maintaining its neutrality and independent international stance while encouraging support for Myanmar’s economic recovery plans, including boosting international trade and foreign investment, diversifying its informal alliances and security arrangements, and ensuring that the country is not overly dependent on any one nation for support and protection.

In the past five years, Aung San Suu Kyi has pursued a foreign policy strategy that put the country’s key emphasis on its relations with the region and its top powers. This was in response to some degree to the growing Western criticism of the government’s handling of the violence in Rakhine and the mass exodus of nearly a million Muslim refugees — or Rohingya as they call themselves — to neighbouring Bangladesh. Myanmar was anxious to secure greater support from its Asian ‘friends’, especially at international forums like the United Nations. This effectively meant distancing itself from the West, especially Europe and the US. This has led the country to lean heavily on China and, to a lesser degree, on the regional bloc, Asean, for support and as a source of investment and trade. Of course, deep down, Myanmar’s fast developing dependence on China has irked the country’s diplomats, including its top diplomat, Aung San Suu Kyi, who is also the foreign minister. There is a clear recognition in government circles that Myanmar’s relationship with China needs to be significantly calibrated. Myanmar will use the opportunity of its massive political mandate and the changing post-Covid international environment to adjust its policy orientation and begin to look westwards to balance its reliance on China — strengthening ties with India and encouraging warmer relations with the US, in particular.

Going forward, Myanmar wants to broaden its network of alliances and strong bilateral relationships, while remaining loyal to the country’s traditional ideological principles in foreign policy: non-alignment, neutrality, independence and universal friendship. But the international reality and the legacy of the country’s isolation during its period under military rule have meant that China remains its key partner — an ever-present, ever-dependable and uncritical supporter. Aung San Suu Kyi has had to struggle with this conundrum ever since assuming power after the 2015 elections: how to relax Myanmar’s dependence on Beijing without offending its giant northern neighbour. For a while, Aung San Suu Kyi dabbled with the notion of eliciting collaborative support from an ‘Asian triumvirate’ of China, Japan and South Korea, especially in terms of investment and trade. But she seemed oblivious to the obstacles that the political realities and rivalries in North Asia posed to this vision. It now seems that Myanmar has become much more responsive to Delhi’s recent overtures for strengthened ties between the two countries.

India has stepped up its courtship of Myanmar in the light of Delhi’s deteriorating relations with Beijing. The visit to Myanmar by India’s foreign secretary, Harsh Shringla, who was accompanied by the Indian army chief, M.M. Naravane, a month before the elections clearly reflects India’s interest in weaning Myanmar away from Beijing, or at least helping counter Beijing’s influence in Myanmar. Ostensibly, this was a visit to review and consolidate cooperation on security and development issues. A coastal shipping agreement with Myanmar was signed during a meeting with Aung San Suu Kyi. More importantly, it has opened the door to greater cooperation on a wide range of issues, including military matters, according to Myanmar diplomats. The importance of this strategic initiative cannot be underestimated: the fact that India’s top diplomat and top military man made a joint visit to Myanmar is highly significant, according to Asian diplomats, and was counter to the usual protocol. That it was timed just before the elections was no coincidence. It is something that their Myanmar counterparts appreciated only too well.

There have also been behind-the-scene discussions on how Japan and India could cooperate on strategic, security and development initiatives that could help balance China’s penetration into Myanmar. The resuscitation of the Quad, involving diplomats from Australia, India, Japan, and the US sharing their vision and concerns of a free and open Indo-Pacific strategy, has galvanized cooperation among these four countries to counter China’s aggressive and belligerent posturing in the region. “It’s a valuable venue for sharing information and intelligence, coordinating approaches and generally promoting mutual understanding,” according to an Asian diplomat involved with these meetings. The idea was conceived by Tokyo several years ago, but has only got off the ground in the last 12 months as relations in the region with Beijing took a turn for the worst.

India and Japan have cooperated successfully on infrastructure projects in Bangladesh, including the building of a port at Matabari to counter the Chinese-built port at Payra. This model of cooperation can provide a framework for similar initiatives in Myanmar, according to Indian and Japanese diplomats. While Japan is prepared to bankroll many of these potential projects, it is particularly keen to maintain a ‘low-key’ presence.

While Myanmar has responded enthusiastically to India’s overtures, it may be even more enthusiastic about Indo-Japanese cooperation. What is certain is that Myanmar’s foreign policy will undergo changes in the coming months, including a distinct tilt westwards, as it broadens its strategic approach and tries to veer away from its unhealthy reliance on Beijing. The main focus of Myanmar’s foreign policy will be on strengthening its economic and security ties with regional partners — especially India, Japan, Thailand, South Korea and Singapore — while continuing to maintain good relations with China.