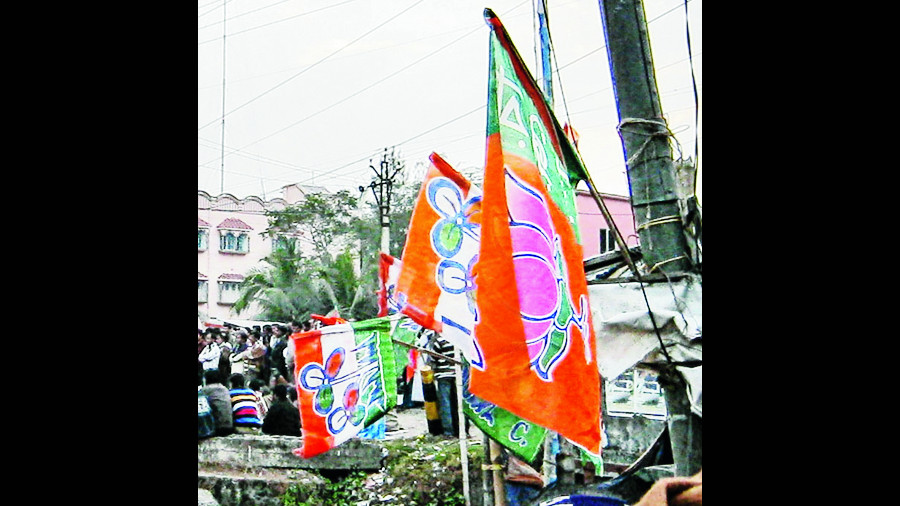 The long-drawn assembly election in West Bengal is finally drawing to a close. Following the eighth round of voting on April 29, there will be a bout of patient waiting, not to mention feverish speculation, until counting day on May 2 when the country will know if this bitterly contested election has resulted in a verdict for continuity or change. Although the campaigning for the final two rounds of voting were marred by the understandable preoccupation with the Covid-19 pandemic, it would be fair to say that the overall debate went beyond the immediate and the verdict was centred on the electorate’s collective judgment on the past and future of the state.

Additionally, despite the odd carping over the lengthy timetable, it is fair to assert that West Bengal has witnessed the most free and fair election in recent decades. Until the conclusion of the seventh round, there were no reports of booth capturing and mass scale fraud voting. The deployment of Central forces in the booth premises — though never inside the polling booths — appears to have acted as a deterrent to those political activists who practise what is euphemistically called ‘booth domination.’ Even where a political party failed to deploy an agent inside the booth, there were no serious allegations of partisan behaviour by the poll officials. There were, however, a few allegations of ‘public voting’ in the case of postal ballots of a section of government employees, although in statistical terms their numbers were minuscule. In hindsight, and despite the criticisms of having inordinately extended the poll process, it would seem the Election Commission did a commendable job bringing order to the election process in a state where the unfortunate link between democracy and violence had been entrenched over a span of five decades.

It would, however, be premature to suggest that the relatively smooth conduct of the 2021 assembly election in West Bengal signals a significant change in the political culture. While it is true that the sanctity of the secret ballot was upheld by the administrative and policing arrangements of the ECI, the campaigning process was not so wholesome. The tendency of political activists — occasionally aided by a partisan police force — to prevent opponents from spreading their message in areas regarded as strongholds was very marked. This ranged from preventing publicity material from being displayed to threatening and often physically assaulting supporters of rival parties. Interestingly, the absence of a level playing field was most marked in Calcutta and in some of its adjoining seats in South 24 Parganas. This culture of menacing politics has resulted in a lot of pent-up feelings and these are likely to surface after the results are announced on May 2. Regardless of which side wins, the state is almost certain to witness a bout of post-poll violence which could spiral out of control in some localities. The administration would be well advised to take pre-emptive steps.

For the moment, however, the attention of the administration and the media is, quite understandably, focused on the explosion of the Covid-19 pandemic all over the country, not least in West Bengal. While the concern is legitimate, as are the fears that political gatherings could turn out to be super-spreader events, the manner in which it is playing out is also aimed at influencing the course of the polls in the final two rounds of polling, especially in Calcutta.

There was, to begin with, a concerted attempt to pin the responsibility for the second wave of Covid-19 on the ECI and, by implication, the Central government. The ruling All India Trinamul Congress spared no effort to mobilize opinion to ensure that the polling in the final three phases be contracted into one phase. More than public health, the idea was to ensure that the Central forces would be inordinately stretched on the ground and unable to control each and every polling booth. This would create the necessary space for the more rough and ready election management strategies to be put into play. It is significant that the pressure of the entire liberal ecosystem of India was applied on the ECI to accommodate the opponents of the eight-phase poll. Using Covid-19 as a ploy, the ECI was subjected to intense attacks and its integrity repeatedly questioned. It is reassuring that the three Election Commissioners stood their ground and handled Chief Minister Mamata Banerjee’s repeated invocation of violence with considerable equanimity.

An associated feature of the pressure to truncate the original schedule was the sustained pressure on middle class voters in Calcutta and urban centres in Asansol and Durgapur to abstain from voting because of the Covid-19 scare. The argument was repeatedly proffered in the media that human lives were more important than politics, and that the elections were an unnecessary intrusion in the more serious business of fighting the pandemic. The argument had two sub-texts. First, that the business of political change was unnecessary to safeguard public health — an argument that conveyed the subtle message that the continuation of the Mamata Banerjee government was justified because — as one article in a Bengali daily newspaper put it — nothing had happened in the past decade to ‘unsettle the equilibrium’. Secondly, the appeal to disregard the elections was aimed at the middle classes which were responsive to appeals for a larger economic regeneration of West Bengal. It was assumed that a low middle class turnout would tilt the scales in urban areas in favour of an incumbent whose support base was from the slums and among minority voters — sections that are traditionally inclined to vote in large numbers. In view of the anecdotal evidence that suggested a significantly big turnout for the Bharatiya Janata Party in rural Bengal, the Covid-19 threat was aimed at providing a counterweight in urban Bengal.

As elections go, the assembly election of 2021 in West Bengal was extremely stretched. For all practical purposes, the campaign can be said to have started immediately after the Lok Sabha election of 2019 when it became clear that the AITC government faced a serious challenge from the BJP. Without the benefit of hindsight, it is hazardous to be sure which side has finally prevailed. However, in the end the battle was reduced to two alternative visions of Bengal — one which stressed cultural Bengaliness but without any meaningful economic agenda for the future, and an alternative that was grounded in linking the exasperation over prolonged economic stagnation with aspirational India (blended with nostalgia over past glory).

As a participant in the campaign, including as a candidate, my personal observation is that the chief minister made herself very vulnerable by not focusing on her 10-year record in office and her plan for the next five years. She allowed immediate concerns — her foot injury, her anger over the styles of Narendra Modi and Amit Shah, and her rage at the ECI and the Central forces — to cloud a larger narrative. On their part, the BJP’s two main campaigners did not deviate from combining a searing critique of Banerjee’s governance record with concrete promises that would accrue both immediately and in the long run. In terms of publicity, the AITC outdid the BJP by a generous distance but the Mamata-centric ‘daughter of Bengal’ wasn’t accompanied by a campaign rhetoric that bolstered rootedness, responsibility and sobriety. The chief minister seemed disoriented and this was in sharp contrast with the grandeur of Modi and the combativeness of Shah. The AITC campaign had organizational depth, but the BJP led the way in spontaneity and enthusiasm.