The Congress Working Committee is a séance 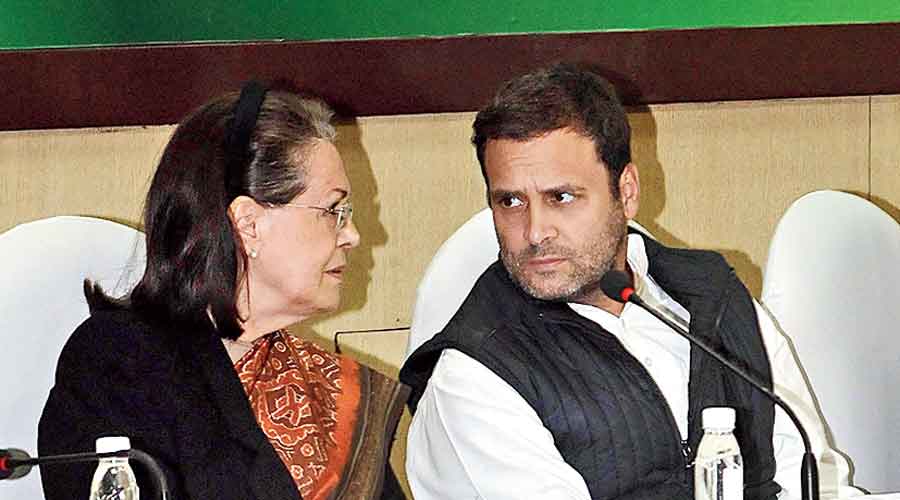 Sonia and Rahul Gandhi. People beleaguered by the BJP’s majoritarianism live in hope that the Congress’s grandees will find it within themselves to shake the party out of its undead state and get down to the task of democratic politics: mobilizing people.
File picture
Mukul Kesavan   |   Published 30.08.20, 12:23 AM

A CWC meeting was called last week in response to a letter signed by Congress grandees asking for more pro-active party leadership in place of the ad hoc arrangement where Sonia Gandhi officiated as its acting president. When the meeting ended with the status quo intact, the impotence of the CWC was widely mocked. The derision stemmed from a misunderstanding. Journalists assume that CWC expands into ‘Congress Working Committee’. It doesn’t.

Sometimes in the history of organizations, initials replace the original name. No one today would speak of WIPRO as the ‘Western India Palm Refined Oil Limited’, which is what it used to be called in the days of Azim Premji’s father. So why do journalists insist on using the CWC’s obsolete expansion just because that was the name it went by in the days of Rahul Gandhi’s great-grandfather? It should be obvious to a child that this CWC has no connection with the party once known as the Congress, does no work, and is not a committee.

The CWC is a séance. Its principal function is channelling the spirits of Rahul Gandhi’s dead ancestors. Call, Wake and Channel: that’s the CWC’s current brief. Like any select séance, only true believers are allowed to attend: complete credulity is the price of visitation. Inter-state bandwidth between the living and the dead being what it is, results aren’t guaranteed. Gossip has it that in one meeting, a garbled summoning of Kamala Nehru raised Kamaraj instead. A torrent of Tamil followed which P. Chidambaram refused to interpret; Kamaraj’s views on the current state of party organization were too trenchant to translate.

The evolution of the CWC from a Congress party organ into a Gandhi family mouth organ has an interesting secret history. Till Rajiv Gandhi’s time, the Nehru-Gandhi family used the CWC in an organizational way. Motilal begat Jawaharlal who begat Indira who begat Rajiv and the CWC served as the party’s cabinet. But after Rajiv’s passing, the family stopped producing election-winning heirs which meant that the aura that sustained the dynasty needed oracular augmentation.

It was at this point that the CWC took on its new function. Family members became resident oracles through whom the ancestral spirits spoke their wisdom and supplied their revelations. Ventriloquizing for the gods was a strenuous business that needed the unquestioning faith of committed handmaidens; this the members of the CWC supplied unstintingly.

The handmaidens’ hissy fit (the plaintive leaked letter) didn’t happen because the CWC’s members had lost faith in the oracular power of the Gandhi dynasty. On the contrary, the letter was positively Sicilian in its assurances that the Family would always be integral to the Party. No, these handmaidens were outraged that they were being asked to accept oracular guidance from a functionary instead of the Family.

After the Rout of ‘19, the Son had stopped channelling the gods and the Mother, as Caretaker Priestess, hadn’t been up to the rigours of the job. The CWC met irregularly, oblations were neglected, and the oracle didn’t speak. Instead of Insights Derived from Eminent Ancestors — the only ideas the Party considered legitimate — the members of the CWC were subjected to the instructions of a party functionary, the current General Secretary (Organization). Prostrating themselves before the Family Oracle came naturally to the members of the CWC but abasing themselves before an apparatchik was intolerable.

So they wrote to Sonia Gandhi, imploring her to grant them the right to take their orders from the Family and the Family alone, to save them the humiliation of doing the bidding of creatures like themselves, and to summon the family’s blessed ancestors more regularly because the People were deserting the Congress.

When the CWC meeting ended, Sonia Gandhi was still the interim president. She would remain in the position for another six months till a permanent oracle was elected by acclamation. The newspapers reported that the Family had rejigged its parliamentary hierarchy to punish the authors of the letter. Manish Tewari, the Lok Sabha MP from Punjab, was put in his place by being passed over for deputy leader. Likewise, Ghulam Nabi Azad, the leader of the party in the Rajya Sabha and the most senior Congress leader to have signed the letter, was put on notice. K.C. Venugopal, AICC general-secretary (Organization), whose status as the Family’s proxy had caused much of the heartburning that led to the letter, was made part of a new five-member ‘decision-making’ group in the upper House.

The leaders of the faux rebellion fell in line. Party men, dissidents and loyalists alike, beseeched Rahul Gandhi to resume the office he had so recently vacated. Akhilesh Prasad Singh, Rajya Sabha MP from Bihar, published a propitiatory tweet. He had signed the letter, he admitted, but he hadn’t meant to discuss party matters publicly. He had complete confidence in Soniaji and Rahulji. Shashi Tharoor, three times Lok Sabha MP and arguably the letter’s most substantial signatory, tweeted obedience: “… once the Congress President says the issue is behind us, it is the duty of all of us to work together constructively in the interests of the Party. I urge all my colleagues to uphold this principle and end the debate.”

The reading public could have been forgiven for asking, which issue, what debate? In its aftermath, the controversy about the letter felt like a made-up storm in a missing teacup. The moves to re-allocate party authority in Parliament seemed unnecessary; there didn’t seem much call for party whips when the Congress’s dissidents had such a gift for self-correction.

Meanwhile, large sections of the Indian people, once the Congress’s constituency, had been wooed and won by Narendra Modi in the name of his ideological ancestors. People beleaguered by the BJP’s majoritarianism live in hope that the Congress’s grandees will find it within themselves to shake the party out of its undead state and get down to the task of democratic politics: mobilizing people. On this showing, though, this is wishful thinking. The members of the CWC have spent so many years raising the dead that they’ve wholly forgotten how to stir up the living.