The case of Afghanistan’s future 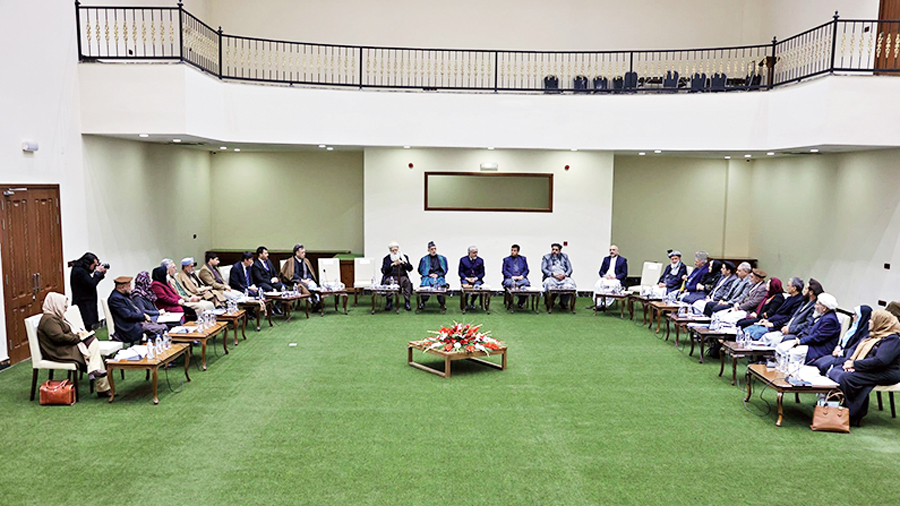 Afghan government officials meet before the second round of peace talks in Doha.
Twitter/@DrabdullahCE
T.C.A. Raghavan   |   Published 15.01.21, 12:01 AM

The drama at the Capitol in Washington obscured the resumption of the intra-Afghan dialogue with the second round between the Taliban and the government of Afghanistan beginning last week. The first round extended for some three months and ended in December with an agreement on the ‘Rules of Procedure’ and an exchange of issues that each side wanted the talks to focus on.

How the first round is evaluated in terms of success or failure depends largely on where you stand on what is happening in Afghanistan today. For some, the intra-Afghan process is no more than a sideshow to the main event — what the United States of America will do in the coming months given that it has to have closure on its longest-ever military intervention. For others, that warring Afghan parties are discussing and negotiating ways forward is a huge plus and significant in itself.

The differences between the two sides are vast. The Taliban is committed to an ‘Emirate’ as the only legitimate government of the future. This puts in jeopardy the entire Afghanistan project as constituted following the Taliban’s overthrow in 2001. Thus, from the outside, the difference between the two sides appears insurmountable — how do you reconcile an ‘Islamic Republic’ with an ‘Islamic Emirate’? Yet, Afghanistan from the outside is not the same as Afghanistan from the inside. Merely securing an end to the conflict seems to be to many enough of a common ground to smoothen the interface between these two rival, competing, and conflicting ideas of Afghanistan.

The road ahead in the second round of negotiations could, therefore, be even bumpier. The area where progress is the least is on the cessation of hostilities and violence. For the government of Afghanistan, a ceasefire is an obvious accompaniment to the negotiations. For the Taliban, this is putting the cart before the horse: the ceasefire can only be the outcome of a successful negotiation. Terrorist attacks in Afghanistan continue and, increasingly, the targets are soft ones — the very institutions and personalities that have emerged as a result of the construction of a new State in Afghanistan over the past two decades.

The ‘Rules of Procedure’ on which agreement was reached between the two sides in the first round of negotiations include formal protocol arrangements. It was agreed that discussions must begin with a recitation from the holy Quran and that meetings must have periodic breaks for the five daily prayers. Provisions such as these possibly would not have been the cause of any dispute.  More difficult was the issue of the legal framework that would be used to resolve disagreements during the process of negotiations. The Taliban demand was that this framework had to be based on Sunni jurisprudence. This would exclude the Shia minorities and was an obvious point of contention for the government side. What is significant perhaps is that a way out was found: a joint committee comprising members from both sides would resolve differences that came up.

In the protracted negotiations that led to the agreed ‘Rules of Procedure’, what was at stake was more than the positions that each side took with respect to Afghan religious and political traditions. For those concerned about the steady deterioration in Afghanistan’s security and the gloomy forecasts that now invariably accompany most sober analysis of its future, these negotiations are a diversion. The stark reality that confronts the country today is that the Taliban insurgency with Pakistan’s support has gained an upper hand and that this position will progressively strengthen.

What will happen in the next round of discussions? It is reasonable to expect some kind of zeroing-in on the principal issues highlighted by both sides — a ceasefire for the Afghan government and an ‘Islamic’ government for the Taliban. Already, there are reports accumulating of the US and others pushing for an interim government to take charge in Kabul to enable a ceasefire to be put in place. It remains to be seen how this works out but clearly some changes in the present architecture in Kabul were to be expected from the time the US and the Taliban reached an agreement on ‘bringing peace to Afghanistan’ in February last year. Alongside this is the concomitant increase in Pakistan’s influence. This is in large part because of the traditional role that Pakistan has played with the Taliban but it also arises from its role in bringing the Taliban and the US on converging tracks. How much this influence will be and how it will play out given the problems Pakistan is facing domestically with the visible alienation of, and protests emanating from, Pakistani Pashtuns are real issues. But these will only surface over a longer time span.

Afghanistan’s best-case scenario is that the Taliban is actually negotiating in good faith and will play its part in a future power-sharing arrangement in that spirit. This case rests on the premise that large sections amongst the Taliban are as weary of the constant violence as everyone else and are, therefore, agreeable to reasonable compromises. Mullah Barader, the deputy leader of the Taliban and head of its political office, is seen as a moderate and as someone long regarded as being open to a political settlement on the basis of compromising with the government of Afghanistan. The arguments against are powerful and, primarily, allege that the intra-Afghan negotiations are the outcome of war weariness and exhaustion not so much of the warring Afghans as of the US. Afghanistan’s history is replete with illustrations of the fragility of externally determined agendas.

With a new administration on the anvil in the US, how one future milestone is approached may provide some clues. The February 2020 agreement between the US and the Islamic Emirate of Afghanistan (the Taliban) specified the withdrawal of all US forces by May 2021. How the new US administration will work with this commitment of its predecessor is also going to be a matter of some weight for what happens next in Afghanistan.

Details apart, what stands out also are older continuities from Afghanistan’s recent history. In 1988, Pakistan and the then government of Afghanistan had signed the Geneva Accord — a face-saving arrangement to enable the Soviet Union to withdraw its troops. The agreement was co-signed as guarantors by the US and the USSR. The US premised its signature on this with the condition that the signature did not mean recognition of the government of Afghanistan — one of the signatories. The 2020 agreement with the Taliban is similarly premised on the stipulation that the agreement does not imply recognition. In diplomatic practice, such ambiguities of engagement without recognition are not unusual. Yet, in Afghanistan’s case, they put an additional burden on the already troubled future ahead.