Advertisement
Home / Opinion / The Brexit show: The Tory elite sees the country as the City

The Brexit show: The Tory elite sees the country as the City 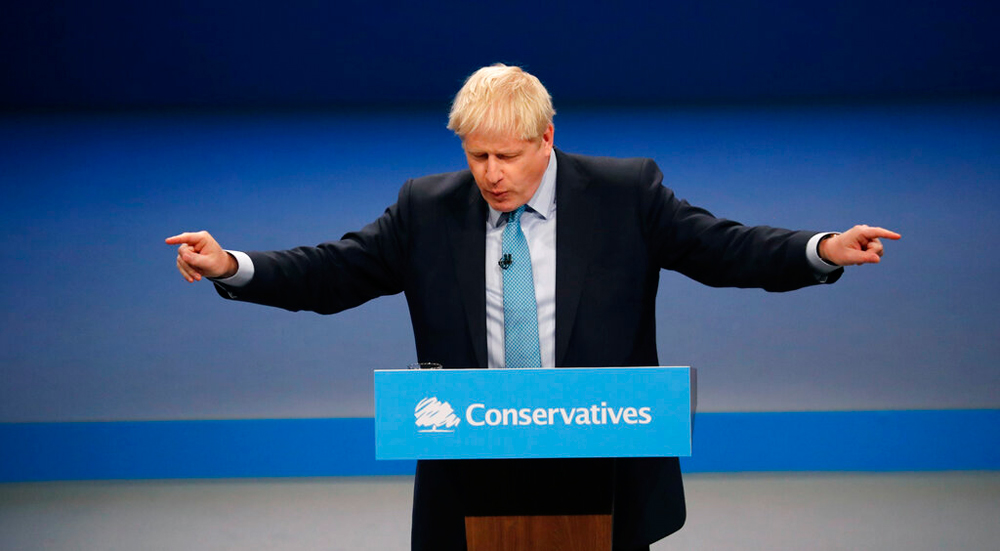 Brexiter Britain is the City buffered by a skirt of picturesque countryside. Singapore with a little more real estate is a literal description of the Brexiter agenda, not a rhetorical flourish.
(AP photo)
Mukul Kesavan   |     |   Published 12.10.19, 11:30 PM

Three summers ago in England, I loafed around a polling booth in a church building watching the natives vote on their membership of the European Union. Ever since then I’ve had a proprietorial attitude towards Brexit. I’ve begun to fancy myself as a witness to history in the making, as someone who was in on this saga from the beginning. It’s like having a bit role in Genesis. Or in a multi-season drama.

As serialized fictions go, Brexit is a young story. The Archers on BBC 4 has been going on for nearly seventy years and nineteen thousand episodes. The lives of people in Ambridge, Borsetshire, are more familiar to millions of listeners than their neighbours and their doings. That’s how Brexit with its cast of thousands feels to me. This extended farce unfolding remotely seems more vivid than the much graver matters of life and death that are the staples of Indian politics.

It’ll be news to the English that their Brexit torment is escapist entertainment for viewers elsewhere, complete with Old Etonian villains and a Speaker who is a living monument to the Art of Coarse Acting, but it is. After four seasons (and counting), Brexit is fun-to-watch family viewing, like Game of Thrones without the gore or Breaking Bad minus the realism.

But the television drama that has the most intimate relationship with Brexit is, of course, The Crown. Once Boris Johnson replaced Theresa May as the show’s main character, it became increasingly hard to separate Netflix’s biopic from Brexit’s breaking news. Anyone who has watched the first season of The Crown will remember Churchill’s meetings with the young queen. All that wonderfully theatrical business with the prime minister’s car crunching up the gravelled paths of Buckingham Palace for Churchill’s audiences with her now feels like a drawn-out prelude to this would-be Churchill’s recent meetings with the old Queen.

Thanks to The Crown we have become so used to being flies on the wall when Elizabeth meets her prime ministers that not being privy to the conversation where the rogue incumbent persuades the queen to prorogue, is infuriating. Throw in Jacob Rees-Mogg doing his Edwardian turn and a viewer could be forgiven for thinking the principal characters in English politics aren’t elected by Britain’s citizens but chosen by a casting director with a talent for broad period drama.

The response of Conservative commentators to Johnson’s recent negotiations with the Irish prime minister, Leo Varadkar, has been a revelation. After all the posturing about the Conservative Party being the party of the Union, and the rhetoric about never allowing a customs barrier in the Irish Sea that might divide Northern Ireland from its parent island, it now looks likely that Johnson has offered Varadkar and the European Union that very concession.

On cue, opinion writers in The Telegraph, the house organ of Brexiter Tories, began to argue that Northern Ireland and its Protestant Unionists represented by the Democratic Unionist Party were a millstone dragging modern Britain down. Readers were suddenly treated to facts and figures about the massive sums of money that Britain invests per head in Northern Ireland and how sustaining the Union costs Britain more than belonging to the EU does. Implicit in this argument is the suggestion that sooner or later Britain will have to cut its losses by cutting Northern Ireland loose.

The alacrity with which England’s Tory elite are preparing to evacuate hitherto sacred Unionist ground tells us something crucial about the Brexit project. When Brexiter Tories speak of British ‘independence’ from the EU, they talk up this liberated Britain as a free-trading powerhouse, a Singapore in the West. This is generally read as a metaphor which is a mistake. The reason Tories are unconcerned about the impact of Brexit on Scottish separatism and are blithe about the prospect of Northern Ireland being assimilated by slow degrees into the Irish Republic, is that they literally see the City as their country.

Take an arch-Brexiter like Jacob Rees-Mogg. Rees-Mogg worked in the City of London and then founded a hedge fund and made his millions. Scores of Conservative politicians fit this City template. For all the Brexiter sneering at the bubble in which London’s Remainer metropolitan elites allegedly live, the Tory party’s leadership and its MPs are suckled by the City’s multiple teats. Conservative MPs are likely to be lawyers in London firms, lobbyists for listed companies, hedge fund managers or journalists for Conservative London papers and magazines. Their political horizons, their social lives and their livelihoods are defined by London. Their vision of Britain’s future is powered by a single idea: the fantasy of the City’s financial muscle turning London into a low-tax off-shore hub, Singapore-on-steroids.

I use London deliberately because for Johnson, Rees-Mogg, Michael Gove, Sajid Javid and their Brexiter centurions, the rest of the country doesn’t really matter, except instrumentally as a way of making up a parliamentary majority. This is evident in their indifference to Scotland. Ruth Davidson, the leader of the Conservative Party in Scotland who had masterminded a Tory resurgence there, resigned because she recognized that her party’s leadership had passed into the hands of a clique that had no interest in cultivating Scottish voters or accommodating Scottish sensibilities. Johnson’s Brexiters were City men using English nationalism to create an independent, unregulated City. The fact that it came with a country bolted on to it was an incidental extra.

Deep down, Johnson doesn’t care if Scotland becomes another country because in his mind it’s a foreign country already. Conservatives will miss Scotland’s manors and landscapes, the naval base near Glasgow that houses Trident, Britain’s token claim to big power status, but nothing in the Tory leadership’s rhetoric suggests a deeper attachment. Forget Scotland, Tories like Johnson struggle to own the north of England. In 2005, the Spectator, then edited by Johnson, published an editorial accusing Liverpool of wallowing in ‘victim status’ over the beheading in Iraq of a civil engineer from that city in 2004: “The extreme reaction to Mr Bigley’s murder is fed by the fact that he was a Liverpudlian. Liverpool is a handsome city with a tribal sense of community. A combination of economic misfortune — its docks were, fundamentally, on the wrong side of England when Britain entered what is now the European Union — and an excessive predilection for welfarism have created a peculiar, and deeply unattractive, psyche among many Liverpudlians. They see themselves whenever possible as victims, and resent their victim status; yet at the same time they wallow in it.”

Johnson’s tone-deafness to sorrow or tragedy outside the Shires and southern England is instructive. Brexiter Britain is the City buffered by a skirt of picturesque countryside. Singapore with a little more real estate is a literal description of the Brexiter agenda, not a rhetorical flourish. This willingness to downsize, to set Northern Ireland adrift, even risk Scottish secession, all to re-invent England in the image of an illiberal city state is a real ambition. Brexit apart, this might require the break-up of Britain and the creation of a very petit England but it’s plainly time to brace for Singapore-on-Thames.