Advertisement
Home / Opinion / Words hurt as much as sticks and stones

Words hurt as much as sticks and stones

How many ordinary people have been murdered publicly — just like that — since the present government came to power? 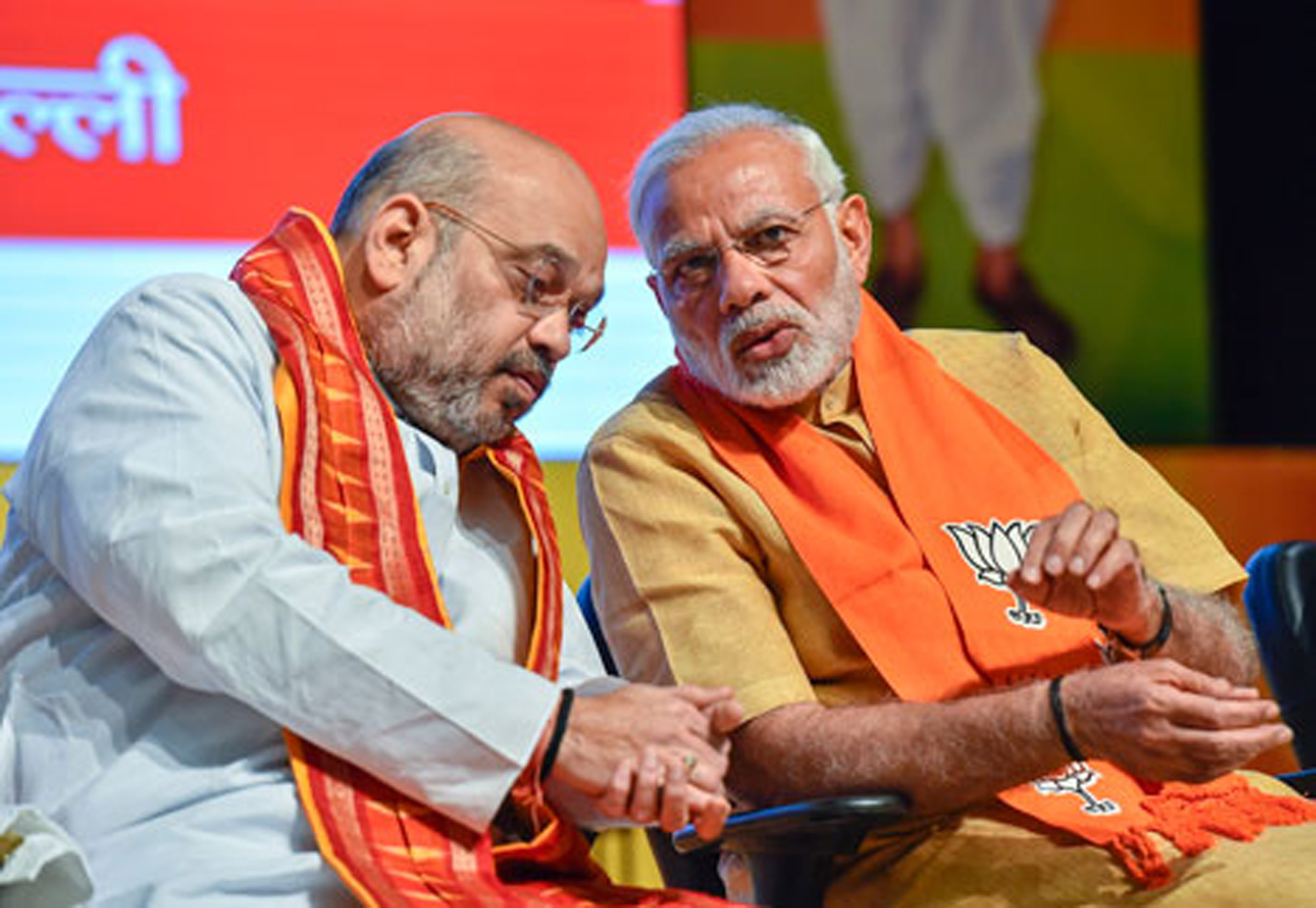 Amit Shah had described Narendra Modi as the strong leader who sends shivers down the spine of his enemies.
PTI photo
Bhaswati Chakravorty   |     |   Published 01.04.19, 04:37 AM

A day after the nation-stopping announcement about the success of Mission Shakti, a name befitting the prime minister himself, he was campaigning in Meerut. There he said that ‘this chowkidar’ has shown the courage to conduct surgical strikes on land, in the sky, and in space. This sums up the Bharatiya Janata Party’s favoured theme for the Lok Sabha elections. In Moradabad earlier, Amit Shah had described Narendra Modi as the strong leader who sends shivers down the enemies’ spine. This was no comic fantasy; Shah was identifying national security as the only issue in these polls. Modi aimed for a more layered statement. The unabashedly persona-centred campaign was underlined by the arrogant third-person projection: ‘this chowkidar’. He credited himself with courage and spouted one of the BJP’s magic mantras, ‘surgical strikes’.

The BJP’s appropriation of this military term ever since the government reported a successful attack on militant forces in Pakistan-occupied Kashmir — after they had infiltrated an army base near Uri in 2016 — expresses its love of force and projects an image of swift and sure retaliation. Balakot falls neatly into the pattern. But the shivers that Shah mentions are meant for the spines of anyone the party considers an enemy, not just militants. The most intriguing part of the prime minister’s Meerut declamation, however, was his invocation of land, sky and space as three spheres of domination. Is there a godlike shadow hovering behind the words?

Words, phrases and their repetition burgeon into myths that serve very un-mythical purposes. When questions were asked about the Indian air force’s achievement in Balakot, the prime minister tweeted that Modi-haters had begun hating India. Soon afterwards, the BJP candidate for South Bangalore declared that if you are with Modi then you are with India, if you oppose him, you are anti-India. “That’s it.” The narrative is too crass to misread. Giriraj Singh, a BJP leader from Bihar, had said earlier that those who oppose Modi should go to Pakistan. Sakshi Maharaj, one of the BJP’s saffron-clad politicians, seemed to have concluded the narrative by saying that there would be no more elections after 2019. Is that the party’s un-mythical goal?

Narratives with targets beneficial to a few need myths to form an alternative pattern of beliefs, pulling themes out of a hat and raising sleeping — or dead — demons. The destruction of Babri Masjid is the daddy of such myth creation, inaugurating the identification of majority religion and muscular politics with a resounding crash aimed at the present and the past. The mandir-masjid theme is in suspended animation, awaiting rejuvenation after the complete erosion of institutional integrities that the Modi-led government is gunning for. Words are excellent soldiers in this desecration. For example, the ‘anti-national’ figure, now familiar and subjected to the colonial law against sedition, can generate a new conception of law and rights, sabotaging the modern justice system, trying to make it irrelevant. In this universe of suspicious, single-minded, aggressive imaginings, Pakistan becomes something other than a neighbouring country with which India has a troubled, often righteously angry, relationship. It acquires instead an almost metaphorical otherness to which the political Opposition and all dissenters must be consigned. In the BJP’s seemingly wild but in reality carefully chosen and judiciously repeated word patterns, anti-Modi equals anti-India equals terrorists, hence the Opposition equals terrorists. Only a tacit acceptance of this sum can let Adityanath get away with calling the Congress candidate, Imran Masood, ‘the son-in-law of Masood Azhar’ — the Jaish-e-Mohammad chief located in Pakistan and reportedly the mastermind of Pulwama — at a rally. That this was not confronted as totally unacceptable or the chief minister charged with incitement of hatred is a fearful symptom of the failure of democratic institutions and of the humane, rational value system that, in whatever flawed a manner, is expected to hold the republic together.

The attack on rational and humane values has certainly been swift and sure. Not the government, but right-wing organizations that continue operating in spite of being associated with murder, kill scholars, rationalists and outspoken journalists. Those “durjans” must be murdered, while “urban Naxals” — activists, teachers, writers, fighting for the rights of the oppressed — can evidently be imprisoned by government forces. The attack on reason is fundamental to the programme: people must know their lives are at risk if they dare to think. That Arun Jaitley merely dismissed as “compulsive contrarians” experts who objected to the BJP-led government’s games with statistics is because he is certain now that there will be no more thinking in this country. Research subjects will have to be on nationalist themes — bovine only? — while awards are likely to go only to institutions with religious propensities that teach yoga and moralism; not to the intellectually restless, knowledge-producing secular universities.

Reason would upset the poisoned cup of myths such as gau raksha and love jihad, created by employing false ideas of religion and history to injure and kill people from less privileged classes and minority groups. Mob violence gives free play to unreasoning hatred, and silences people by a continuous assault on their rights. But the repetition of catchwords and labels was apparently not enough to contain the misery of large segments of people, especially farmers, the less privileged, minorities and the jobless. It became expedient to drop the chaiwallah label for that of the more versatile chowkidar — guarding morals, money, nation and cleanliness. The label would ennoble the watchman while suggesting the prime minister’s humility — the simple man with a suit immortalizing his name in gold thread — as it draws a sentimental veil over the conditions of chowkidars’ existence that reflect some of the deepest caste-and-class inequalities of our society.

The decorative chowkidar, however, is also the fount of the famous no open defecation drive. The numbers of new toilets are offered as evidence of its success, even as reports question it. The huge increase in single chamber latrines and defective septic tanks means more work for manual scavengers. Washing the feet of sanitation workers in Allahabad was an effort to gloss over the hideous reality of their lives and deaths. The country needed a modern sanitation system and machinery for sewer cleaning, not toilets to show off. The Swachh Bharat Abhiyan has made sure that vulnerable castes, tied to the most agonizing of inherited jobs, keep to their places. No piece of the — now discarded –—achchhe din pie for them.

Keeping up social divisions for the purposes of domination and mobilizing hatred are part of an agenda; the last also has another function. It is expected to distract attention from the way institutions are changing, and the routes through which the wealth of the nation is vanishing. How many ordinary people have been murdered publicly — just like that — since the present government came to power? How many of those killers are in jail? With bloodshed and fear coexisting with glittering spectacle and vengeful, triumphalist rhetoric, is anyone following the money?

And did someone say that words can never hurt?