The BJP is inattentive to the problems of East Bengali refugees 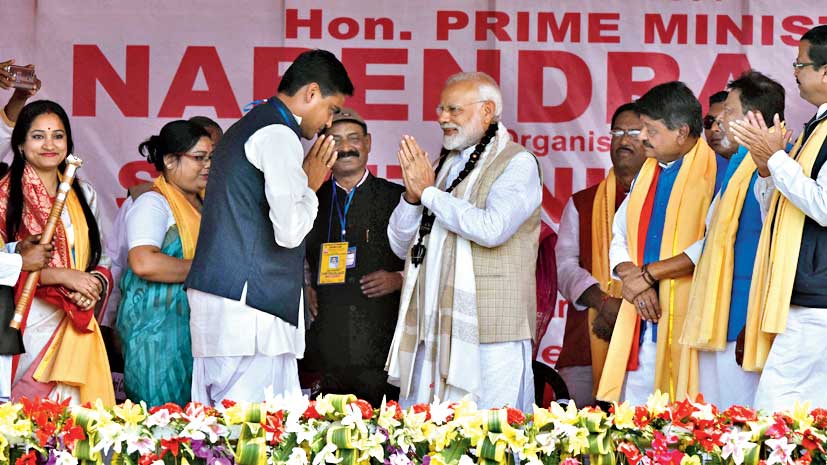 The saffron fraternity cannot understand it. Despite persistent incitement by the Vishwa Hindu Parishad, Hindu Jagran Manch and other activist groups, Bengal refused to erupt in protest against the anti-Hindu violence in Comilla. Far from encouraging the irrepressible Subramanian Swamy to lead an avenging army into Bangladesh, the Trinamul Congress sent the self-appointed champions of stranded Hindus packing with a flea in the ear and a black eye from the four assembly constituencies that voted recently.

Riots in Tripura were a poor substitute for the sound rebuff that the Bharatiya Janata Party suffered at the hands of the East Bengal origin and Matua voters of Dinhata, Santipur, Gosaba and Khardah, all along the border. Nor could a predictable victory in National Democratic Alliance-ruled Assam compensate for the rejection in Bengal. Perhaps the BJP might have had fewer wounds to lick if it had attended to the real grievances of millions of East Bengal refugees whose shameful treatment by successive regimes in Delhi the late Pranab Mukherjee meticulously recorded. Instead, the party raised and chased mirages from the past in hopes not of redress but of political dividend. Such cynical games held little appeal for a community that may have plunged into retaliatory violence in 1964 but has now come to terms with painful history.

Despite the emotional appeal of the “common mother tongue and common economic interests” that Huseyn Shaheed Suhrawardy pleaded on April 27, 1947 to argue for an “independent, sovereign, undivided Bengal in a divided India”, these are no longer seen as the sole indicators of identity. It is possible that Syama Prasad Mookerjee’s fear that a “sovereign undivided Bengal would be a virtual Pakistan” planted the seeds of doubt even before Jogendranath Mandal’s heartbreaking revelations. It is possible, too, that Mookerjee was not alone in holding (to cite Joya Chatterji, the historian, in Bengal Divided: Hindu Communalism and Partition 1932-1947) “that Bengali Muslims were, by and large, ‘a set of converts’ from the dregs of Hindu society”. Those who know may not find it easy to forgive Mookerjee for writing secretly to Lord Mountbatten on May 2,1947 asking for Bengal to be partitioned even if India was not. It is even more difficult to forget that in the fury of the Lok Sabha debate on the Constitution (First Amendment) Bill in 1951 he forgot his own earlier advocacy to lash out at Jawaharlal Nehru, “You are an arch-communalist, responsible for the partition of this country!” Mookerjee was clamouring by then for Partition to be annulled. That would also seem to be the burden of Swamy’s song since he first proposed invasion nine years ago.

A flicker of expectation in 1971 made my Lakhnavi colleague, Saeed Naqvi, feel extraordinarily “lonesome” despite his Muslim credentials while covering the Bangladesh war. “My colleagues in the press contingent were suddenly lost to me once they were past immigration in Dhaka,” he writes. “The Chakravartys, Mukherjees, Ghoshals, Basus and one Karlekar (more Bengali than most because of his Bengali mother) merged quite indistinguishably with the Rehmans, Haqs, Mujibs, conversing in Bengali with a vengeance. High decibel sounds of ‘Ki Khabar, Khub Bhalo, Oray Baba’ marginalized me completely.” But that will-o’-the-wisp romance quickly faded and Bengalis today accept the unspoken rationale of the Citizenship (Amendment) Act, which raises hackles among those who cannot grasp that fast-track citizenship formalizes the end of an era. Bengalis also recognize that a community that has dwindled from 28 per cent of East Bengal’s population in 1947 to 8 per cent is bound to disappear. Driven by militant fervour, the saffron fraternity probably finds it difficult to comprehend that this philosophical acceptance is not accompanied by rancour towards Bangladesh or resentment against Muslims. As for being immigrants, no one is a stranger in Calcutta. As Suhrawardy declared bitterly when Bengal’s future was being furiously debated, “So, in the end, the tussle will rage round Calcutta and its environments built up largely by the resources of foreigners, inhabited largely by people from other provinces who have no roots in the soil and who have come here to earn their livelihood, designated in another context as exploitation.”

For all the grief at the circumstances of his death, Mookerjee’s symbolic status for the sangh parivar is probably greater today than any significance he might have for ordinary Bengalis. Exercises like the Dr Syama Prasad Mookerjee: A Selfless Patriot exhibition that Amit Shah inaugurated at — to further drive home a point — the Nehru Memorial Museum and Library at Delhi’s Teen Murti House only highlight the BJP’s need for totems. Not that it has proved a very fruitful exercise despite Suvendu Adhikari’s boast that without Mookerjee, “this country would have been an Islamic country and we would be living in Bangladesh.” The Trinamul Congress would not have swept the board in March-April if that spectre had haunted many Bengali voters.

The threat may have seemed real for a brief period in Mookerjee’s lifetime, although I am not sure whether the Amrita Bazar Patrika claimed to create or reflect public opinion when it famously announced on April 23, 1947 that 98.3 per cent of 534,249 respondents had replied with an emphatic “Yes” to the question, “Do you want a separate homeland for Bengali Hindus?” while only 0.6 per cent said “No”. Although the venerable Surendra Mohan Ghosh, the local Congress chief, certified the poll was “regular and valid”, it had a major flaw. Bengali Hindus were asked whether they wanted a homeland whereas the debate seething at provincial and national levels was whether Indian Muslims should have a separate homeland. Like Mookerjee, the Patrika assumed that all of Bengal would be Muslim territory out of which Hindus might be permitted to carve out an enclave. It was of a piece with his belief that Mookerjee held, as Bidyut Chakrabarty quoted in The Partition of Bengal and Assam, 1932-1947: Contour of freedom, that “if ever an impartial survey is made of Bengal’s administration in the last ten years, it will appear that Hindus have suffered not only on account of communal riots and disturbance, but in every sphere of national activities, educational, economic, political and even religious.” Hindus who fled East Bengal suffered the most. Even their often discordant presence in today’s Calcutta is a tribute to their enduring resilience.

Mookerjee tried to address the bigger problem of which they were a fragment with a “Bengali Hindu Homeland Movement” dominated by the Hindu Mahasabha but also including the entire political spectrum apart from supporters of an independent Bengal. There have been many variations on that theme, Swamy’s persistent urging that India should invade Bangladesh and demand territorial compensation for “the influx of its citizens” being a relic of that well-meaning but sadly impractical concern. A repetition of the 1923 Lausanne convention that enabled Greece and Turkey to exchange populations is impossible because of the huge numbers and the religious frenzy it would unleash. Zulfiqar Ali Bhutto’s precise logic that while a Muslim Bangladesh should remain in Pakistan, a Bengali Bangladesh should merge with West Bengal was also ruled out by a Bangladesh that was as determinedly Muslim as it was Bengali.

Visiting what was then West Germany in 1960 in the wake of a series of attacks on Jewish sites, I met a rabbi whose sad epitaph I have never forgotten. “The Jewish problem in Germany is a problem without Jews,” he said. That may be true one day of the Hindu problem in Bangladesh. There is nothing we can do about it but it would be criminal folly if the politicized religious fervour of politicians in search of votes is allowed to turn Bangladesh’s Hindu problem into India’s Muslim problem.