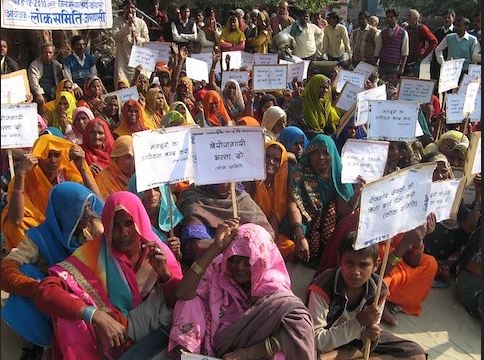 A demonstration against unemployment by Dalit women. What India requires today is a ‘third democratic upsurge’ that can rearticulate an anti-elitism against the traditional social elites
(Photo: Lok Samiti / Flickr)
Ajay Gudavarthy   |   Published 23.08.19, 03:31 PM

Two unmistakable features of Indian democracy in the last three decades have been those of reduction in poverty and the breakdown of patron-client relations. While the former is credited to economic reforms, the latter has been attributed to various social and political mobilizations, primarily those of the Dalit-Bahujan protest politics. The 2019 Global Multidimensional Poverty Index Report stated that between 2005-2006 and 2015-2016, India lifted 271 million out of poverty. While absolute inequalities have risen sharply, relative deprivation has reduced. From pockets of abject poverty, India moved to vast swathes of population groups that suffer from vulnerability. Social policy moved from entitlement to empowerment. The phenomenon of ‘trickle-down’ has created a vulnerable, yet aspirational, majority in India. With the conversion of rural agricultural land to real estate and the increase in the non-farm sector, there is a new aspirational class in the rural hinterlands.

Along with the phenomenon of growing aspirational groups that wish to be part of the perceived expanding opportunities brought about by economic reforms is the breakdown of the patron-client relationship marked by subjugation and exclusion by the dominant castes and the urban professional middle class. A ‘new middle class’ has emerged with the new entrants belonging to the Dalit-Bahujan communities. This has had an impact on caste equations, challenging not only the patronage of the dominant castes but also caste-relations within the Dalits and the OBCs. It is now alleged, openly and aggressively, that the benefits of the ‘politics of accommodation’ under the Congress, represented by the ‘Nehruvian consensus’, were cornered by few dominant social groups. The ‘second democratic upsurge’, with the initiation of affirmative action for the backward classes and the rise of regional forces claiming to represent the OBCs under the slogan of social justice, was a kind of course correction of the Nehruvian ‘politics of accommodation’. However, the patronage system continued to operate within the Dalits and the OBCs and the social dominance of English-educated, caste-Hindu elites remained unchanged. The current expansion of the economy and social mobilization have challenged the limits of the ‘second democratic upsurge’.

While this process remains essentially democratic and egalitarian in its aspirations, the old kind of politics that contributed to democratization has got thoroughly delegitimized. Nehruvian secularism and the politics of social justice and tolerance have come to symbolize the elements that instituted patronage, crony-capitalism and caste-based exclusion. It is in this changing context that right-wing politics in India has effectively articulated this latent anger through its optics of anti-elitism and anti-Muslim mobilization that have come to symbolize a violent rejection of ‘preferential treatment’, ‘appeasement’ and ‘privileges’. Right-wing politics is being perceived as a further democratization of social relations after the ‘second democratic upsurge’.

Much of the ‘old’ discourse and modes of political mobilization, irrespective of their social and political content, are being seen as attempts to reinscribe the old kinds of exclusions, inequalities and patronage. All forms of oppositional politics, including that of the Left, are seen to be operating within the old paradigm. The activism of middle class social elites who chose to speak truth to power in establishing independent media houses, mobilizations of the Opposition, legal activism, lawyers and those who run NGOs — each has become a symbol of social privilege. Their commitment, idealism and convictions are thus extensions of the ‘illegitimate’ influence they wield. Similarly, the politics of social justice of the Samajwadi Party and the Bahujan Samaj Party and other regional parties that are welfare oriented through populist policies are represented as the old kind of networks of patronage. The recent controversy in Bengal over Mamata Banerjee’s concession to return ‘cut money' is a good instance of this.

Right-wing politics is articulating this ‘systemic anger’ to create newer kinds of exclusions around caste and religion. The intolerance that we witness in terms of street violence has this self-justificatory morality and self-righteous dimension, which is what makes it possible to have a large-scale mass mobilization cutting across castes. The rise of ‘New India’ as the ‘Hindu India’ has this silent but visible dimension of combining caste and religious intolerance with anti-elitism. The political philosopher, Akeel Bilgrami, compared this to a game of chess, where when the rules of game do not favour you in any which way, then people seek to overthrow the board of chess itself rather than play the game or seek to alter the rules. The self-righteous violence is symptomatic of this latent anger that is being redirected against the subaltern groups of Dalits and Muslims besides targeting the traditional social elites. It finds resonance in such expressions as the ‘Khan Market gang’ and ‘Lutyens’s Delhi’.

Intolerance becomes a way of reclaiming lost spaces and propelling a new sense of belonging while secularism and social justice come to signify the discourse of a privileged middle class and social elite that are apparently indifferent to the dynamics of and equations among social groups. The old way is being set right by a thick ‘ethnic nationalism’ that questions the niceties and the civility of liberal constitutionalism.

Right-wing politics has existed in India from the early 20th century. But it has mostly remained on the margins and failed to capture the popular imagination. Ironically a sustained process of democratization through the discourses of secularism and social justice has ended up creating a new space to this regressive kind of right-wing politics.

What India requires today is a ‘third democratic upsurge’ that can rearticulate an anti-elitism against the traditional social elites, repoliticize the breakdown of patron-client relationships and reoccupy the imagination of the aspirational groups in a more democratic and inclusive direction.