Is imagination vulnerable to climate change? 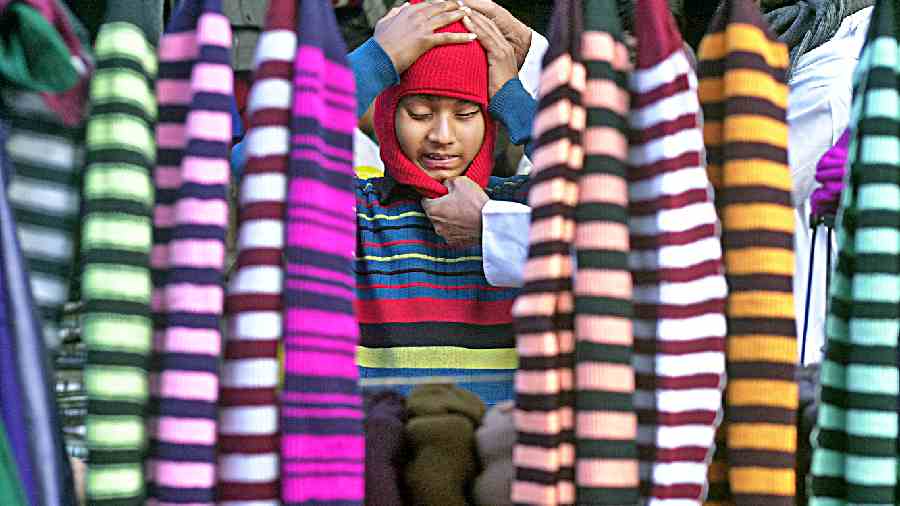 Marilyn Monroe had once compared life to a sweater. If Monroedi, by a quirk of history, had been born in this part of the world, she may have tweaked her quote and said, instead, that life is a bit like the monkey-cap, the Bengali’s reliable, metaphorical igloo to stave off winter, which has set in — apparently.

In spite of the mirth that is generated in the rest of India by the sight of Bengal arming its men and, at times, even ladies with the monkey-cap, a cursory look at history would reveal a certain wisdom in this sartorial choice. This piece of attire, the claim goes, is a close cousin of the balaclava, which derived its identity from the knitted headgear worn by British troops in the Battle of Balaclava. To the Bengali — shivering — soul, what could be a more honourable endeavour than a battle against the cold in the land of sun and sweat? Freud may have chuckled at this invocation of a bloody, martial history: for it could be a wily strategy on the part of the Bengali’s subconscious given the stigma he has had to bear, all through the raj, of being a rather effete race.

But could it be that the monkey-tupi is now battling an even more formidable adversary? Bengal’s winter, much like hemanta — the pre-winter — faces an existential threat in the Anthropocene. Data bear out the severity of the crisis. Writing in Firstpost, Chirag Dhara, a climate physicist, referred to meteorological figures to suggest that temperatures in and around Calcutta have witnessed a rise of 1.2 degree Celsius in the last 170 years; the clearest signifiers of the city’s changing climate are its milder — fleeting — winters and scorching summers.

Indeed, at the time of writing, the minimum temperature has dropped below 13 degree Celsius just once in Calcutta this winter. Yet, the monkey-cap, comforters, shawls, scarves, jackets, sweaters — members of the Woollen Tribe — have not exactly disappeared from the city. Is this because of that unique, albeit comical, Bengali ability to imagine the season even though winter is, today, a pale shadow of its former self ? However localised, this cultural reflex action, which enables a collective to conjure up a season in its absence, deserves interrogation. For it introduces a fascinating layer to the unfolding discourse on climate change.

The world over, the climate crisis is synonymous with a grudging recognition of the failure of human imagination. Or what Rob Hopkins calls “imaginative poverty” in his book, From What Is to What If: Unleashing the Power of Imagination to Create the Future We Want. Hopkins has identified the culprits complicit in this plunder of imagination: “We spend, on average, 65% of our waking hours in front of screens. Austerity has led to the closure of 478 libraries and has decimated community arts initiatives. Teaching hours for arts subjects fell 21% between 2010 and 2017, and entries for arts… fell by 35% in the same period. One-third of adults… feel as though they don’t use their imagination for work. We are living in a time that has been called the ‘Age of Anxiety’, and neuroscience shows how anxiety, fear and stress directly impact the parts of our brain vital to the imagination.”

Hearteningly, human ingenuity seems to have found a way to address the depletion. The mayor of Mexico City, Hopkins writes, had created a ‘ministry of imagination’. Bologna, in Italy, has had a ‘civic imagination office’ as well. The aim, in both instances, is to restore the aquifers of the mind and then harness imagination — a civic good — for collective welfare.

Hopkins, however, argues for deeper transitions. Given the depths of the drain, he is convinced that restoring imagination’s vitality would not be possible without meeting certain structural conditions. Among these, Hopkins accords the greatest priority to food, water, security, space, time (leisure) and social connections. But modernity, a form of disaggregated existence on account of the fatal seduction of immersive technology — the Metaverse, for instance — and the rigours of political and economic austerity, is particularly unsuited to meet the requisites. That is perhaps why Hopkins falls back on legislative protection. A National Imagination Act, Hopkins believes, needs to be unleashed for humanity to rediscover its critical and creative disposition that could stimulate conversations on the climate crisis.

This theory of weaponising imagination may appear novel but Hopkins is not an outlier. Consider Amitav Ghosh’s revealing contention in The Great Derangement that the climate crisis occupied — occupies — minuscule space in prominent literary traditions. This, too, is an example of the impoverishment of — and a crisis in — imagination. The reason for the delay in policy interventions as well as the concomitant public inertia during the era of fledgling scientific evidence on imminent, but still invisible, climate change during the 1970s cannot be explained without admitting to the inertness of imagination cutting across the spheres of literature, culture and State action.

Now, the monkey-cap-covered Bengali has added a further twist to the already complex epistemological framework on climate change. What if imagination, coupled with other potent weapons in Bengal’s arsenal — nostalgia and a sense of loss — as well as emerging, immersive technologies, is counterproductive, leading to the proliferation of an illusion about the robust presence of a season — winter, in Bengal’s case — which, in reality, has been enfeebled by an errant climate? As climate change intensifies, causing the virtual disappearance of seasons and disruptions in the patterns of those that survive, would the mind and, eventually, cultures increasingly rely on imagination and technology to create a fictional — deleterious — alternative reality? This is not implausible. Bengalis, cold facts suggest, are not the only ones vulnerable to counterintuition. Three years ago, in a tweet, the former president of the United States of America, Donald Trump, had disproved climate change by pointing to the freezing temperatures that were sweeping that nation. To be fair to Trump, the cold was not a figment of a fecund mind. But Trump had erred — as gravely as the Bengali has. In his imagination, and in the imagination of the constituency of climate sceptics, America’s weather patterns have remained constant. Such a feverish imagination is, of course, not a gift of the faculty. It is the result of such subterranean shifts as the ascendancy of right-wing politics and anti-intellectualism, the erosion in trust in science and institutional wisdom as well as a spike in religious conservatism. Democracies, be it India or the US, have been exhibiting these symptoms for a while.

The French philosopher, Jules de Gaultier, had conceived imagination to be the only weapon in the war against reality. While reaching this conclusion, he may have had in his mind the image of a Bengali covering himself up in layers on a ‘wintry’ day with the Six’s thermometer reading 16 degree Celsius.