Some lessons from Bihar 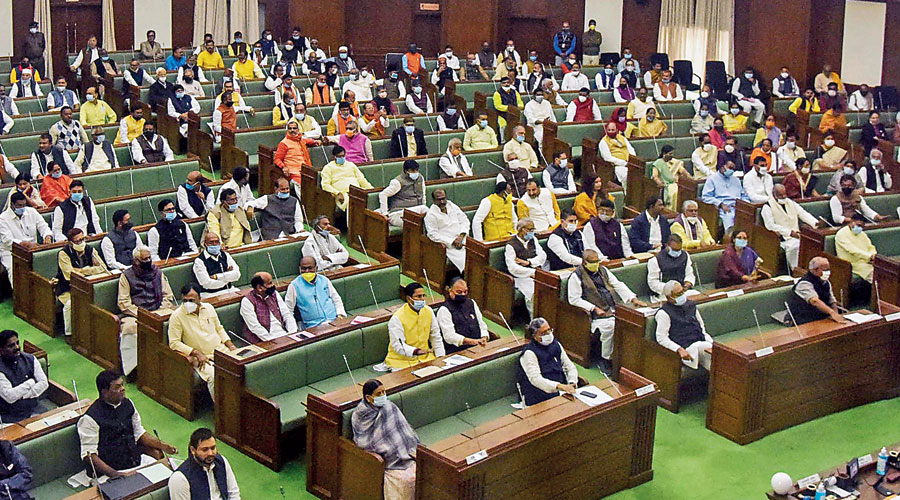 In the recently concluded Bihar assembly elections, the Left parties won 16 out of the 29 seats allocated to them. The CPIML (Liberation) won 12 out of the 19 seats it contested. Even though the National Democratic Alliance has scraped through, it is undeniable that Bihar has elected an inspiring Opposition with a strong Left contingent at its core.

It is worth noting that an analysis in Scroll found that the “CPIML performed as well as the Rashtriya Janata Dal and even outperformed it across four subregions,” indicating “an actual resurgence of the Left, and not just an effect of alliance politics.” Moreover, the CPIML’s performance buoyed up the entire Mahagathbandhan in its areas of influence. The Scroll analysis found that “in the southern regions, where the Mahagatbandhan swept, both the BJP and to a larger extent the Janata Dal (United) were badly defeated by various Mahagatbandhan candidates... Census data reveals that there is a greater Dalit population in the Bhojpur area. The Mahagatbandhan did particularly well in reserved seats this election.” While Bhojpur does have a significantly large Dalit population, it also has a fairly recent history of extreme feudal oppression. Over three decades of anti-feudal assertion led by the CPIML in Bhojpur and southern Bihar counted towards the Mahagathbandhan wins in this region.

For the past few years, the discourse in the mainstream media has been full of schadenfreude about the decline of Left politics in India. Even acknowledgements of the popularity of young student leaders on the Left have been used to drive this discourse, pitting the young leaders as ‘charismatic individuals’ against the supposedly outdated Left parties. The CPIML’s performance in Bihar has, once again, proved that such “reports of the demise of the Left in India are greatly exaggerated”.

In the wake of the Bihar results, many have asked us what shiny, new, smart ‘Chanakya-niti’ did the CPIML use in Bihar? The answer may sound disappointing. The CPIML has no ‘secret sauce’ or shortcut to offer. Its success comes on the back of many cruel defeats and losses. The CPIML’s work is all about the ‘ABCs’ of the Left. But perhaps those ABCs do need restating with emphasis now. In that spirit, I would like to outline some key features of the CPIML’s work in Bihar.

Right from its early days in the 1980s, the CPIML in Bihar acted on the firm Marxist-Leninist understanding that ‘class struggle’ did not operate in an imaginary realm of ‘pure economic struggles’. Instead, struggles for social and political justice were recognized as being integral to class struggle as those for economic justice. So the Marxist-Leninist movement in southern Bihar asserted the right to land and wages; the right for the oppressed communities to occupy public space as equals deserving of dignity; and the right for the oppressed to cast votes and even elect leaders. The struggle for voting rights of Dalits and EBCs in Bihar, a struggle in which the CPIML was the driving force, is comparable in its historical significance to the civil rights movement in the United States of America which fought for African-Americans to avail of their right to vote. For a movement with that history, it is not difficult to see the NRC-NPR-CAA as a ‘voter suppression’ move to snatch away hard-won voter rights; a move to disenfranchise not only the Muslims but the entire oppressed labouring communities.

Some wonder how the CPIML’s alliance with RJD could work so well given the sharp contention between the two parties since the 1990s and the early 1990s. The CPIML, unlike the CPI and the CPI(M), did not ally with the RJD when it was in power. Perhaps in large part as a result of this decision, the CPIML retained its independent mass base and political profile, even as the CPI declined rapidly during the same period. But even during that period, the CPIML did not let up in its ideological and political work against the Rashtriya Swayamsevak Sangh and the Bharatiya Janata Party. The CPIML mass base and rank and file now have no trouble recognizing the dangers posed to democracy by the BJP in Bihar and India: and so an alliance with the RJD has been embraced as necessary and welcome.

Third, the CPIML is bold rather than shame-faced and furtive about taking up issues of political injustice. When Yogi Adityanath was telling BJP election rallies that the CPIML was ‘anti-national’ and that thanks to the BJP, the people of Bihar can buy land in Kashmir, the CPIML reminded Bihar’s poor and deprived that what they needed was homestead land in Bihar — and it was the NDA regime that had violently evicted them from such land in order to appease big landlords and corporations. Kapil Mishra and Anurag Thakur campaigned in Bihar branding the CPIML as a ‘break India gang’ for supporting Shaheen Baghs. The CPIML, meanwhile, did not hesitate to remind everyone to vote to defend the Shaheen Baghs which are the most inspiring civil rights and equal citizenship movements of our time. Every CPIML campaign speech urged people to ensure that no Umar Khalid, Sudha Bharadwaj, Anand Teltumbde or Stan Swamy would be wrongfully jailed in Bihar.

It is not necessary, or even possible, to replicate the Bihar alliance model in every state where elections are due. The takeaways from the Bihar experience are as follows — that ideological and political resistance to the BJP’s expansion must be the top priority; that strengthening the Left movement is crucial to building a stronger bulwark against fascist politics; and that the Opposition as a whole needs to build grassroots agitations on issues of livelihood, jobs, education, and health as well as against instances of social and political discrimination and injustice.