Rana Uppalapati, an international skater and businessman, is skating across India to raise money to educate 25,000 girls 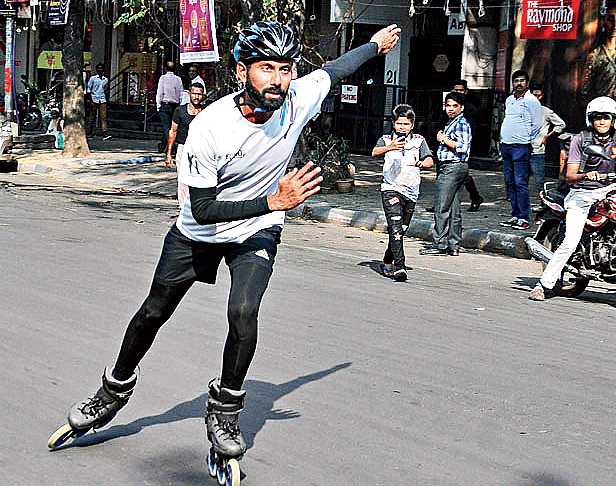 Entrepreneur and international skater Rana Uppalapati skates as a passerby takes his pictures in Calcutta.
PTI
The Telegraph   |   Published 18.11.18, 08:55 AM

Sir — One cannot change the world single-handedly. But one can hope to cast a stone across the waters to create ripples. Rana Uppalapati, an international skater and a businessman from Visakhapatnam, is thus skating across India to gather funds for the education of 25,000 underprivileged girls as well as raise awareness among six lakh children on standards of safety. The initiative that he is part of is certainly welcome. Yet, its fruition would depend on the extent of public participation to support such causes. And what about the government? Should it not lend a hand for the cause of education of children?

Sir — A statement made by the former governor of the Reserve Bank of India, Raghuram Rajan, has led to fresh controversy in India. Rajan said that demonetization and the goods and services tax stifled the growth of the Indian economy last year (“Rajan too says DeMo to blame”, Nov 11). He is not wrong. In the speech declaring the demonetization of two high-value currency notes, the prime minister, Narendra Modi, had claimed that it would break the grip of corruption over the country and bring back black money. These things are yet to happen. There can be no denying that the decision has adversely affected the growth of the Indian economy.

Sir — Raghuram Rajan should be lauded for the clarity of his speech, “Is India ready for the 21st century?”, at the University of California, Berkeley. He minced no words in informing the audience that the two decisions taken by the Narendra Modi-led government have not reaped the promised dividends. The people of the country are disillusioned. Where are the much-vaunted achche din?

Sir — The observations of Raghuram Rajan on demonetization and the GST are not new. Several experts have said similar things in the past. The disruption caused by demonetization and the implementation of the GST could have been avoided. Many small and medium-sized enterprises had to shut up shop and daily-wage earners lost their jobs. The fact that over 99 per cent of banned currency was returned to the banks shows that the objective of flushing black money out of the system remains unfulfilled.

The benefits of demonetization, if there are any, have been overshadowed by the enormous pressure it put on the economy. Efforts to put ‘suspicious deposits’ under the scanner is unlikely to yield any results as several cases in which poor people were used as money mules to get demonetized notes exchanged were reported after demonetization.

Moreover, data released by the controller general of accounts about direct tax collection seem to belie the claims made by the finance minister, Arun Jaitley, that demonetization had a huge impact on tax compliance.

Sir — Raghuram Rajan’s remarks seem to be politically motivated. First, he should not have spoken ill of the Indian government on foreign soil. Then, one can easily ask what Rajan did to curb non-performing assets of banks during his tenure as the governor of the RBI.

Moreover, the cost of many essential items have come down after the introduction of the GST. Teething troubles with the implementation are regularly addressed by the GST council. Businessmen who were earlier evading paying taxes have been brought under the tax net. Reforms brought by the National Democratic Alliance government can be seen as long-term measures that will benefit the country. It would be better if, instead of criticizing the government, people came forward to resolve problems that plague India.

Sir — One wonders why the government does not accept that demonetization and the introduction of the GST were mistakes. Raghuram Rajan is an expert economist and he is absolutely right in saying that the above decisions had a serious impact on India’s economy.

It is worrying that the Bharatiya Janata Party is still bent on defending the two policies. It is high time the Narendra Modi-led government admits its failure and takes redemptive measures.

Sir — The former governor of the RBI clearly said that at a time when the Indian economy was poised for growth, demonetization and the GST stalled any such progress. One hopes that since it is evident to the entire country that these policies did more harm than good, Arun Jaitley will stop calling knowledgeable people who are critical of the government’s decisions “prophets of doom”.

Sir — The Lok Sabha elections are around the corner and, as such, the words of caution issued by eminent economists like Raghuram Rajan are significant and timely. People should pay heed to the reasoning forwarded by Rajan. The shortcomings of this government and its hasty and disastrous economic decisions should be kept in mind when people choose their representatives.