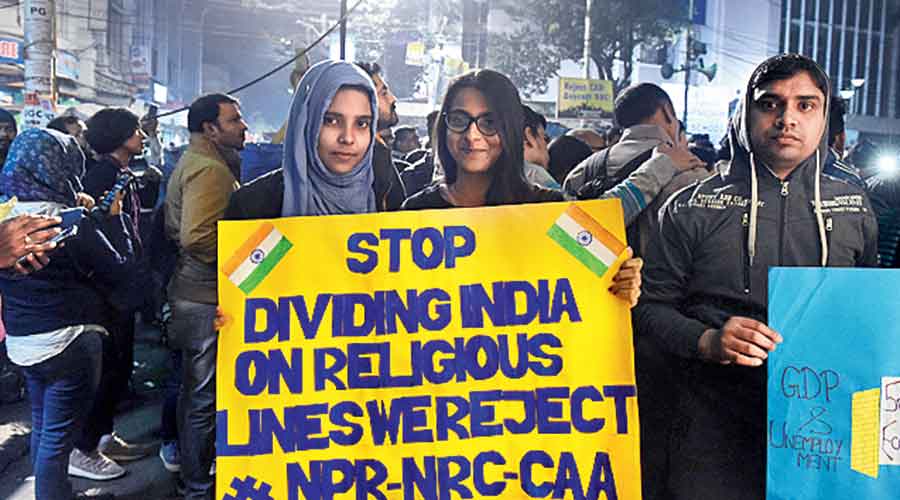 As the last year winded towards its end, two sets of events defined the state of the country. One was the series of attacks on mosques in Madhya Pradesh, where Hindutva mobs set out to terrorize Muslim communities encouraged by a tame police force. The second was the ‘love jihad’ law passed by the Uttar Pradesh government that was followed by scores of arrests of young Muslim men on flimsy charges. At their base, both are products of the pervasive Islamophobia that has reached epidemic proportions in our country.

The reason the Bharatiya Janata Party finds it politically beneficial to ramp up its anti-Muslim campaign and Opposition parties are meek to challenge it is that Islamophobia has gained popular acceptability. The constant drib of Islamophobia injected in our societal bloodstream since, at least, the Ramjanmabhoomi movement has now become an ever-accelerating spurt, spread by a formidable apparatus composed of the dominant political party, the mainstream media, social media, and millions of sangh parivar karyakartas. To counter it, the moment requires us to go beyond op-eds and social media posts and build an anti-Islamophobic movement. In the absence of any serious countervailing force to check it, rising Islamophobia will not only lead to the further brutalization of Muslim citizens but also serve as the fuel to eat away at the remains of our democratic freedoms.

Yet, unlike an anti-caste movement, we have never had an anti-Islamophobic movement. The Ambedkarite movement has transformed our political culture over many decades to the extent that every political party is pushed to swear by Ambedkar and take rhetorical positions against the oppression of Dalits. But there has never been a similar programme to reverse anti-Muslim prejudice, with its own tools, vocabulary and iconography. This partly explains why even the anti-CAA movement, although it did take some hesitant steps to address Islamophobia, often fell back on Ambedkarite and nationalist symbols — with resistance articulated through cries of ‘Jai Bhim’ and the ubiquitous portraits of Ambedkar on the one hand and the national flag and the Constitution on the other.

Even the concept of Islamophobia has rarely made an appearance in our public discourse, couched under the broader rubric of communalism. The stated answer to communalism has historically been a staid secularism, guarding the encroachment of strident religion into the public sphere, while largely leaving society alone to its prejudices. To the extent society is addressed, it is in the form of glib bromides about being ‘Indian first’ and Indians being ‘brothers and sisters’. This passive, anodyne, largely elitist concern for secularism has been shown to be impotent to halt the steady march of Hindutva and anti-Muslim prejudice. In the same way an orientation of caste agnosticism can never be the answer to casteism, which requires an active stance of anti-casteism, an inert secularism cannot be an answer to the all-pervasive Islamophobia. Hence, an anti-Islamophobic movement becomes necessary.

What will such an anti-Islamophobic movement look like? For one, the article calls for a movement more of the civil society than of political parties. Opposition political parties will always be constrained by the logic of votes until anti-Muslim prejudice starts to wane in society. Fundamentally, Islamophobia is based on a bundle of stereotypes and prejudices against Muslims that have established deep roots in our culture. To reverse this, one would require concerted participation of prominent members of the Hindu civil society that shapes culture — journalists, academics, lawyers, writers, intellectuals, and artists. There are six steps secular civil society actors can take to build the foundation of an anti-Islamophobic movement.

First, recognize the extent of India’s Islamophobia problem, its deep roots, and discard the myth of a uniquely tolerant Hinduism. In her book, My Son’s Inheritance: A Secret History of Blood Justice and Lynchings in India, the historian, Aparna Vaidik, argues that many Indians (including liberals) are indifferent to Hindutva violence against Muslims and Dalits because their privilege prevents them from seeing it. “This violence is invisibilised because it comes secretly embedded in our myths, folklore, poetry, literature, and language. Moreover, what keeps us from seeing the violence, especially caste violence and the abuse of minorities, is our privilege,” Vaidik pointed in a recent interview. In place of the narrative of minority appeasement, which even many secular intellectuals have lent credibility to, civil society actors need to bring ‘Hindu privilege’ and the issue of intolerance in the Hindu community to the front and centre of the public discourse along with a belated recognition that Hindutva is not a fringe movement and that it is now the mainstream Hindu political philosophy.

Second, since Islamophobia is a problem of image, its antidote lies in Muslim visibility. In order to present a real image of Muslims, the country requires more Muslims in leadership positions in civil society organizations. In academia, media, NGOs, publishing, art houses, there needs to be an active effort, including affirmative action, to diversify these spaces by including more Muslims. In place of words eulogizing secular India, there needs to be concrete actions to ensure that Muslims get a seat at these tables proportionate to their numbers and have a voice in how they are run. A preference can be given to backward class and caste Muslims to ensure that these benefits are not monopolized by elite Muslims.

Third, the representation of Muslims in art needs to undergo a fundamental transformation. Movies and literature need to junk hackneyed tropes like the ‘good Muslim/bad Muslim’, ‘nationalist/traitor Muslim’, ‘skullcap wearing Muslim fundamentalist/terrorist’. These tropes serve to underscore the insidious tension between the Indian nation and Muslim identity. Along with it, the tokenistic and stereotypical portrayal of the ‘Muslim shayar’, the ‘hot-headed Muslim friend’ and the ‘Muslim criminal’ need to be replaced by a realistic portrayal of ordinary Muslims. In the America of the 1990s, particularly with films of black directors such as Spike Lee, a realistic picture of the Black experience was provided to a mainstream audience of millions of Americans who had, heretofore, only seen them through the prism of crime, drugs and violence. Similarly, literature around the everyday experiences and challenges of Indian Muslims needs to be encouraged and translated into local languages. If Premchand’s “Idgah” is all that most Hindi-speaking Indians are acquainted with in terms of Muslim characters, it’s a problem.

Fourth, the much-diminished liberal end of journalism needs to adopt an anti-Islamophobic stance in presenting news of crimes against Muslims. In the case of ‘love jihad’, the media-fuelled the myth by not explicitly presenting it as a concoction of the right-wing. In beef-lynchings, even the supposedly liberal media harp on the alleged crime of Muslims — whether or not they ate/transported beef, rather than presenting it as an unequivocally shameful act of terror.

Fifth, secular Hindus must not merely proclaim the virtues of secularism in their echo chambers; they can start working on their families, and then maybe their neighbourhoods. Hindutva is not a Hindu-Muslim problem; it is a Hindu problem that needs to be fought in Hindu spaces. Starting points can be the family and neighbourhood WhatsApp groups that are rife with Islamophobia. Even decent people baulk at contesting Islamophobic messages on message groups to avoid ‘pointless’ confrontations. One of the reasons Islamophobic prejudice has skyrocketed in the public sphere is because it has broken free of the shame associated with it. This shame can be reconstructed, one courageous intervention — digital or face-to-face — at a time.

Sixth, a new Muslim intelligentsia must emerge, and must be encouraged to emerge, which can define the vocabulary and iconography of resistance to Islamophobia. We saw the seeds of this younger, more assertive, intelligentsia during the anti-CAA movement where young students and activists faced down the apparatus of State repression to organize an unprecedented nation-wide movement. Now, many of these students and activists find themselves in jail. We don’t find civil society clamouring for their release in the way it has got behind the ‘safer’ movement of farmers. If we are serious about fighting Islamophobia, the first order of action would be to tirelessly work for their release.

The reversal of Islamophobia is not just in the interest of Muslims; it is in the interest of all Hindus who are invested in the democratic freedoms of this country. However, merely participating in conclaves about secularism in elite spaces and harkening back to an imagined secular India won’t reverse Islamophobia. It would require concrete actions. The aforementioned steps can be a start.