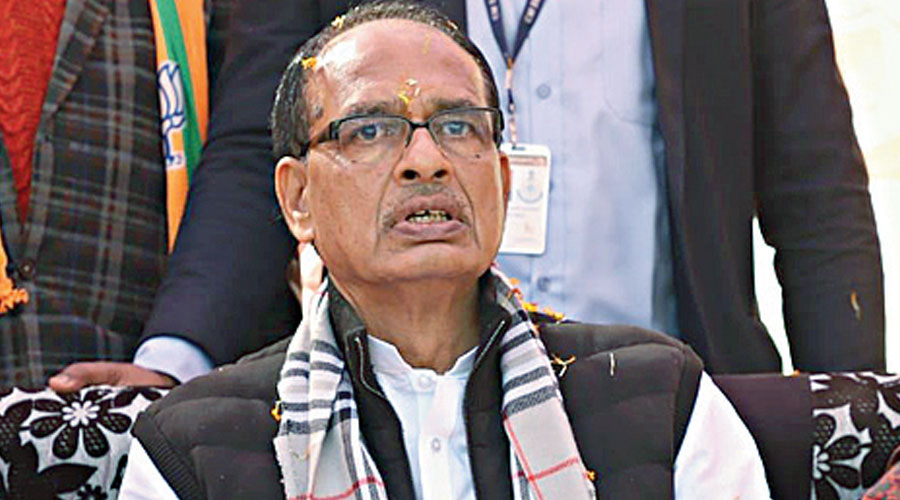 Many in the Bharatiya Janata Party believe that the ‘Bulldozer Baba’ image of the chief minister of Uttar Pradesh, Yogi Adityanath, and his tough stance against alleged criminals have played a big role in the recent victory at the assembly polls. Now, the Madhya Pradesh CM, Shivraj Singh Chouhan, is trying to imitate the monk. The 63-year-old leader, known for his lovable ‘mama’ (uncle) image, now wants to transform into a tough firebrand leader. It is not an easy job at this age but Chouhan, driven possibly by the lust for power, looks determined.

“Makan khodkar maidan bana doonga,” (I will dig your house and turn it into a field), the gentle leader was heard saying recently. Posters of Chouhan, along with a picture of a bulldozer and filmy slogans, have come up across the state. There have been instances in the past when Chouhan had tried to emulate Adityanath. He even pushed for a UP-like love jihad law in MP. The state is set to go to the polls at the end of next year. This is Chouhan’s fourth term as CM. Party insiders feel that the fear of losing the chair has made him restless. The current top leadership of the party is known for promoting new leaders and Chouhan does not fit the bill.

All eyes were on the Bihar CM, Nitish Kumar, when he went up to the stage during the oath-taking ceremony of his counterpart in UP, Yogi Adityanath. The prime minister, Narendra Modi, was the chief guest for the occasion. Politicians, cutting across party lines, were eager to see how a socialist leader and a self-professed follower of Ram Manohar Lohia, Jayaprakash Narayan and Mahatma Gandhi, who has also opposed its ally, BJP, on numerous issues, will carry himself at the event.

Nitish met Adityanath on an equal footing but bowed like a Japanese in front of Modi. When the latter did not return Nitish’s namaskar, silence fell over the politicians from Bihar who were present there. Later on, one of them was heard saying that such behaviour was the combined effect of the resounding victory of the BJP in UP and also that the BJP has more members of the legislative assembly in Bihar — 77 — than the Janata Dal (United), which has only 43.

The BJP orchestrated the defection of all the MLAs of its ally, Vikassheel Insaan Party, in Bihar without remorse. The saffron party even started demanding the resignation of VIP’s founder and animal husbandry and fisheries resources minister, Mukesh Sahani. Sahani calls himself the “son of Mallah” and is considered to be the leader of the fishermen and boatmen community.

As expected, Sahani refused to comply. He also made it clear that he will resign from the cabinet only if the CM and the JD(U) chief, Nitish Kumar, asks him to do so. But the JD(U) leadership kept quiet, leaving the BJP frustrated over its inability to fully decimate the VIP.

Sahani had taken on the BJP at the UP assembly polls where the Mallah community is around 14 per cent of the population. The minister woke up one morning to find that his nameplate was missing from the gates of his official residence. The VIP supporters blamed it on the saffron party. Several BJP leaders have said that Sahani would be consigned to oblivion after July 21 when his tenure as a member of the legislative council comes to an end.

It is well-established that the BJP and its allies within the sangh parivar are committed to Hindutva. Whether it’s the anti-conversion bill targeting Christians, hijab ban in educational institutions or prohibiting non-Hindu traders at temple festivals, the sangh parivar has never faltered from its primary agenda. But neither the BJP nor its allies mind courting minority communities for electoral gains. Recently, the Karnataka rural development minister, KS Eshwarappa, said that he strongly believes that Muslims and Christians would “someday” associate with the Rashtriya Swayamsevak Sangh. The comment came in the backdrop of a verbal tussle with Congress leaders in the state legislative assembly. Eshwarappa bragged that the BJP’s ideological parent will one day win everyone over.

The push for the semi-high speed railway network in Kerala by the Communist Party of India (Marxist)-led Left Democratic Front government has provided fodder to the Opposition Congress, its allies and even the BJP against the ruling dispensation. While the CM, Pinarayi Vijayan, has been working hard to bring it to fruition and has even met the prime minister to pitch the ambitious plan, the Opposition has unleashed a mass agitation against the project.

The Congress seems to have forgotten that it had earlier proposed a similar project which, ultimately, did not come through. But now the Grand Old Party is opposed to the LDF government’s K-Rail SilverLine. The state Congress president, K Sudhakaran, said that he would prefer hopper flights inter-linking the four airports in the state and has even named it ‘Fly Kerala’. Sudhakaran clearly does not care about the operating cost of flights.

The governor of Odisha, Ganeshi Lal, has garnered praise for his accessibility to the public. Lal is known to invite ordinary people to his residence and discuss various issues with them. Recently, he flew to the Bonda Hills to attend a meeting. Lal, who is committed to the development of the Bonda community, announced Rs 1 lakh for Bonda women’s dance troupes. He also donated Rs 5 lakh from the governor’s fund for the development of Bonda areas.