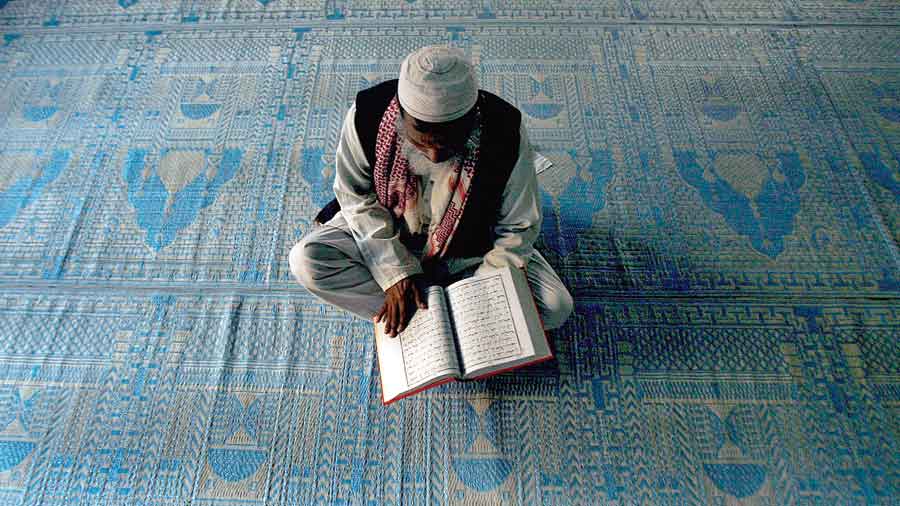 Pew’s strangest result is the response of Muslims to a question about religious discrimination. Asked whether there is a lot of discrimination against Muslims in India, a large majority of the Muslim respondents answered that they didn’t believe that was the case. To juxtapose Ali’s account of life as a Muslim in Narendra Modi’s India with Pew’s bland percentages is to look upon two incompatible realities.
Shutterstock
Mukul Kesavan   |   Published 11.07.21, 12:08 AM

After reading the Pew report on religion in India last week, I happened to read Mohammad Ali’s essay on being a Muslim in India. Ali is an Indian journalist, now living in America. His piece appeared in the July issue of The Baffler, a magazine that appears both online and in print. It’s called “The Scream: Is this the end for Muslims in India?” Reading these disparate texts in quick succession was a deranging experience, like walking out of some temperately quantified world into a malevolent snake pit.

The Pew survey aggregated answers to a set of questions put to weighted and counted individuals from India’s major religious communities. I can imagine a historian some decades from now reading these answers, expressed in percentages, as an authoritative snapshot of desi opinion. Reading Pew’s results as a contemporary, I found some of its numbers at such odds with lived (if anecdotal) reality that I think the survey ought to be required reading for historians not as an archive of information but as a cautionary tale, a lesson in how well-meaning enumeration can go unwittingly wrong.

Pew’s strangest result is the response of Muslims to a question about religious discrimination. Asked whether there is a lot of discrimination against Muslims in India, a large majority of the Muslim respondents answered that they didn’t believe that was the case. To juxtapose Ali’s account of life as a Muslim in Narendra Modi’s India with Pew’s bland percentages is to look upon two incompatible realities.

Ali was a reporter with a liberal Indian newspaper for a long time and in the Modi years, communal violence directed against Muslims became, by a kind of default, his beat. He writes about how the creeping majoritarianism of earlier decades became a new and brazen thing under the auspices of successive BJP governments. But the heart of his essay was his realization that the central conceit of being a reporter, being above the fray, wasn’t available to him as a Muslim journalist because his identity as a Muslim had become part of the story that he was writing.

The arc of Ali’s essay is the transition from being a reporter taking risks to tell the story of India’s majoritarian turn to the realization that the vigilantes that he interviewed now defined public opinion in his country, defined a consensus committed to the violent subordination of Indian Muslims like him. Ali reflects on how traumatized and fearful his years of fraternizing with murderous goons to report from the frontline of Indian politics had left him, especially when he realized that their violent fantasies had become the stuff of middle-class WhatsApp posts. Towards the end of his essay, he comes to a conclusion that should be required reading for anyone who isn’t Muslim in India: “For some time now, Muslims have been wondering about our future in the Hindu Rashtra, or Hindu Republic. I believe that it will demand our obedience, debasement, and public humiliation. Indian Muslims will endure the model that has been deployed in Kashmir, in Gujarat, in Assam: subjected to subordination, segregation, and periodic violence. Like them, we will have to learn to live outside the protection of law, watching our helplessness feed the hubris of a triumphant Hindu public. The Muslim body’s vulnerability is the foundation of their imperialist ambitions.

Modi has reduced us — all of us — to our immediate identities. As Muslims, we experience an existential threat that overrides all other aspirations. We once felt entitled to an honest life of dignity in India. That dream is over; there is no getting around this fact.”

Both the Pew survey and Ali’s desolate and moving account of the violent marginalization of Muslims bear witness to modern India. Only one of them can be true. Some might argue that Ali’s job, cultivating lumpen bigots and covering communal violence as a Muslim journalist, skewed his sense of the place of Muslims in India. That Muslims going about their ordinary business (and taking time off to answer a survey’s questions) mightn’t see their plight in Ali’s dire terms. They would be wrong. Ali worked in his newspaper’s Delhi bureau and his beat was communal mayhem in North India. Any Muslim who lives in Yogi Adityanath’s Uttar Pradesh or lived in the vicinity of northeast Delhi through the riots, who reads a Hindi newspaper or watches a round-the-clock news channel, knows exactly what Ali means.

Hindus might not. This could be for several reasons: because they haven’t been paying attention or because they believe Muslims have been coddled and pampered and some corrective justice is in order or simply because it’s impossible to understand the threat of institutional subordination and intimidatory violence unless you’re at the receiving end.

In 2002, Ashutosh Varshney, a political scientist, wrote an important book, Ethnic Conflict and Civic Life: Hindus and Muslims in India, in which he tried to explain the base conditions for communal peace or communal violence in Indian towns. He showed that equivalently sized cities with comparable Hindu and Muslim populations often had very different levels of communal violence. He argued that one important institutional check on communal rioting was the existence of institutions that brought Hindus and Muslims together, not as friends but as professionals or colleagues or just citizens sharing common spaces. Lawyers associations, Rotary clubs, trade unions, reading rooms, any institutional setting that Hindus and Muslims shared, lessened the prospect of an open, violent breach in their relations. Towns that didn’t have strong civil society institutions were more volatile than towns that did.

Varshney’s thesis was vulnerable to the chicken-and-egg argument: perhaps these institutions that transcended religious community were the consequence of communal peace, not its cause, but his book demonstrated that these institutions, however construed, were signs of civic health. In the vocabulary pioneered by the French Revolution, these institutions expressed a basic republican value: fraternity.

Ironically, 2002 was also the year of the Gujarat pogrom, which, along with the ‘Gujarat Model’, came to symbolize the ideal of the radically unfraternal republic, envisioned by V.D. Savarkar and M.S. Golwalkar and halfway achieved by Modi. The subordination that Ali believes is the fate of Indian Muslims is the explicit objective of the sangh parivar’s majoritarian project. The new Parliament building needs a new motto to fit the shape of this unfraternal republic better than ‘Liberty, Equality, Fraternity’ does. ‘Community, Disunity, Impunity’ should be blazoned across its main entrance.

Or perhaps it won’t come to that. Ali writes that “Modi has reduced us — all of us — to our immediate identities.” The “us” here refers to Muslims but it applies equally to Hindus. In a country where the State reduces Muslims to their religious identities, it reduces, by implication, Hindus to theirs. When Muslims are lynched and ghettoed and disenfranchised, it is in our name... unless we explicitly act and speak and write to show that it isn’t. If we do, Ali’s unfraternal hell mightn’t become a permanent condition.