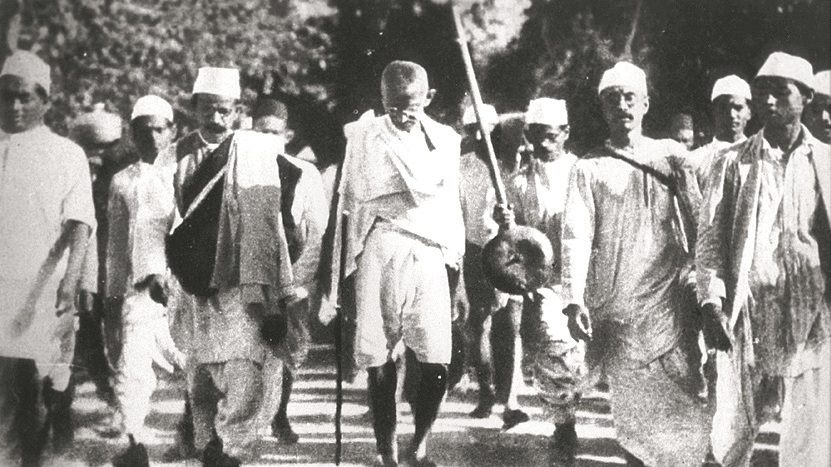 The celebration of the 75th anniversary of India’s Independence commenced on March 12 with the nation observing the 91st anniversary of the Dandi march. The immediate objective of that historic march by M.K. Gandhi on March 12, 1930 was to break the salt law imposed by the British that prohibited Indians from making salt from sea water. The march started from Sabarmati ashram and witnessed massive public participation. After covering almost 200 miles, it culminated on April 6, 1930, when Gandhi broke the salt law by picking up a fistful of salt in Dandi. The magnitude of the event shook the very foundations of the British empire. While launching the 75th anniversary of India’s Independence on the 91st anniversary of the Dandi march, Prime Minister Narendra Modi claimed that the march “... gave the message of atma-nirbharta (self-reliance) and atma-vishwas (self-confidence)”. This statement hardly addressed the deeper dimensions of the Dandi march.

The Dandi march represented the idea of sustainability. Three weeks after he broke the salt law, Gandhi wrote, “... this struggle is for freeing the world from the monstrous tyranny of material greed...” Global warming and climate change are outcomes of the “monstrous tyranny of material greed”. At the core of Gandhi’s articulation remains the essence of sustainability.

On March 30, 1930, while walking to Dandi, Gandhi noted the acute shortage of water in the province and stated that if anybody could give him money he would have wells dug for providing drinking water. Again, on April 3, 1930, he told his colleagues about the paucity of water in Dandi and cautioned them to use it as if it were milk. That warning sounds particularly relevant for the 21st century, described as the one of the most water-stressed epochs in the history of humanity.

Even though Gandhi was 60 years old during the Dandi march, he walked much faster than his fellow marchers. He noticed that many of them got tired after walking, suffered from fever due to fatigue and developed blisters on their feet. Deeply distressed, Gandhi, in his speech of April 3, explained their plight by saying that they were part of a generation that was delicate and pampered. He appealed to combine national work with physical exercise and described walking as the prince of exercises. He disapproved of the use of motorized transport for covering small distances and said, “Do not resort to motor-cars on the slightest pretext. The rule is, do not ride if you can walk.” Gandhi’s remark has lessons for modern India, which has become the diabetes capital of the world as well as the hub of several other lifestyle diseases. The Dandi march, in a way, was a march for the health of our nation.

The event also stood for inclusion. During the march, when Gandhi was asked whether the future legislature would accommodate Muslims in its fold, he replied that he should get a seat only after Muslims, Christians and Parsis got adequate representation. Such a vision counters the dangerous majoritarianism that is now part of the national narrative, polarizing people and making politics exclusive. The Dandi march represented the right to dissent and a culture of protest against an unjust law. It upheld Hindu-Muslim unity and pluralism as opposed to homogeneity and exclusion based on religious majority. Above all, it stood for sustainability and wholesome living that are defining modern public policy and sustainable development goals.