Port side: Renaming of public spaces

Why has the Rashtriya Swayamsevak Sangh allowed its icon’s name to be attached to a port in rather a sad condition? Is it because it is in West Bengal? 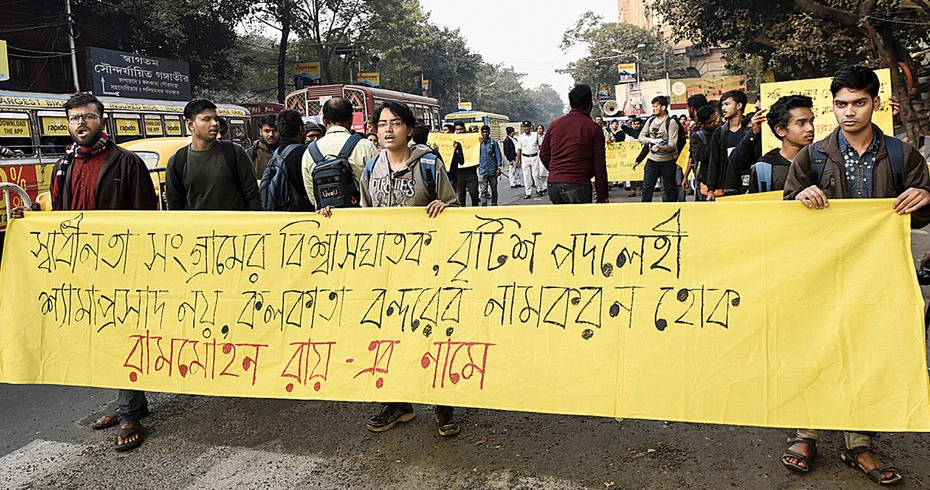 Protesters walk in a rally with a banner that reads in Bengali: “Not Syama Prasad, a traitor in the freedom struggle, a British bootlicker, but Kolkata Port Trust should be named after Rammohun Roy”.
File picture
The Editorial Board   |   Published 07.06.20, 07:57 PM

Detractors say that Indians have no sense of history. But they are wrong. Indians are over-conscious of history; it is remade each time a particular party comes to power. One sign of this is the renaming of public spaces so that the memory of past icons is over-written by names of figures that suit a particular party’s vision and ideology. That the continuity of collective memory of spaces is an important factor in the sense of belonging to a region or a land seems unimportant. The Congress, for example, is regularly accused of having named every edifice after one or the other member of one family. So it can come as no surprise that the Bharatiya Janata Party should decide to name the port in Calcutta in its 150th year after Shyama Prasad Mookerjee, the Jana Sangh leader, who, said the prime minister, was the father of industrialization and made many sacrifices for one nation and one Constitution. West Bengal, ironically, cannot object as the Opposition in Karnataka has done to the renaming of a flyover in Bangalore after V.D. Savarkar. The port in Calcutta, with 12 other major ports in the country, falls under the jurisdiction of the Centre, unlike smaller, intermediate ports administered by the respective states. Besides, Mookerjee comes from Bengal; the ostensible objection of the Opposition in Karnataka to renaming the flyover after Savarkar is that the name of an iconic figure from Karnataka should be used.

Politicians are usually concerned with immediate public perception; hence the renaming. Rewriting history textbooks is similar, but its extent depends, as the BJP’s excisions and additions have shown, on whether a party is determined to construct, not just reinterpret, a past. This thrust is best exemplified in the Babri Masjid destruction, reportedly with the blessings of certain politicians, after which those who broke it down went unpunished. Renaming the port in Calcutta, however, is suggestive for more than one reason. Why has the Rashtriya Swayamsevak Sangh allowed its icon’s name to be attached to a port in rather a sad condition? Is it because it is in West Bengal? It is strange enough that the renaming is being celebrated in the middle of a pandemic. Obviously the Centre has found something to be busy over.