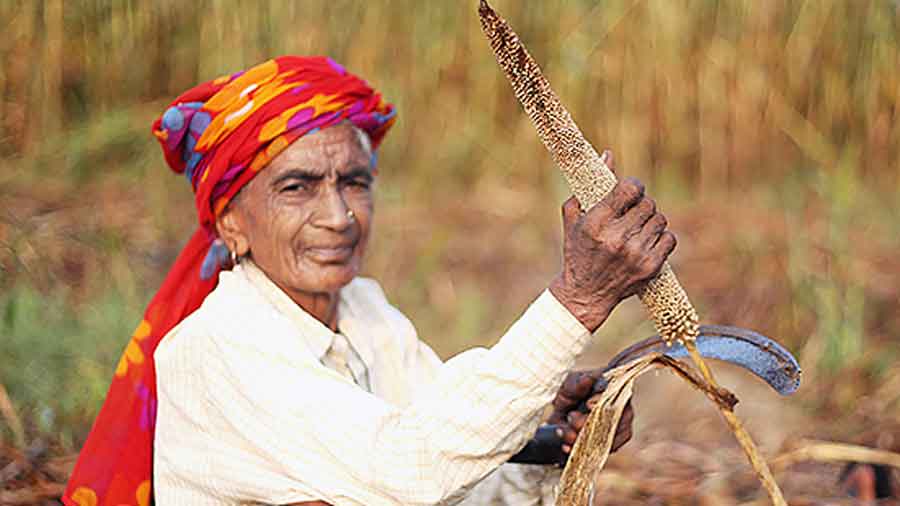 Climate change and the agrarian crisis are intertwined. They are manifest in the threat to food and nutritional security. These challenges have been further aggravated by the pandemic, the war in Ukraine, and reduced global food production. The looming hunger crisis is especially potent for vulnerable populations living in arid and sub-arid regions. In its report, the Intergovernmental Panel on Climate Change has pointed out greater incidence of extreme events, increasing weather variations, global warming, and water scarcity that can adversely affect food production.

In India, the ‘ship-to-mouth’ existence in the 1960s and the geopolitical pressures of the dependence on food aid from the United States of America ushered in the Green Revolution. This input-intensive intervention — a knee-jerk reaction to an emergency shortage on account of multiple factors, including war and drought — led to a permanent solution with an emphasis on production of high-yielding varieties of rice and wheat under irrigated conditions. Between 1950-51 and 1960-61, rice and wheat were cultivated in approximately 50% of the area under foodgrains and 40% of the area under cereals. In 2000-01, the figure changed to 70% and 60%, respectively. In 2019-20, the share was around 75% of the area under foodgrains and nearly 60% of the area under cereals.

The data indicate a shift away from coarse cereals (particularly millets, which the Government of India, as per a gazette notification in 2018, now refers to as nutri-cereals) and pulses. Consequently, per capita per annum foodgrain production increased from 187 kg in 1960- 61 to 230 kg in 2021-22. This was largely due to an increase in rice and wheat, from 104 kg to 174 kg, and maize from 9 kg to 24 kg. Correspondingly, there has been a decrease in millets from 38 kg to 11 kg and that of pulses from 28 kg to 20 kg.

Millets are a good source of protein, micronutrients and phytochemicals. Their neglect over preference to rice and wheat has meant hunger or calorie requirement is met while missing out on other nutritional deficiencies. This does not bode well during a pandemic because a balanced diet is good for immunity. Besides, millets are resilient crops that can withstand biotic (pests and weeds) and abiotic (heat and water) stress.

In 2017, Odisha launched the ‘Odisha Millets Mission’ with a focus on marginalised areas and vulnerable people. In the first year, the yield doubled and the value of produce trebled. Rising demand has led to the programme expanding from 8,000-plus farmers cultivating 3,400 hectares across 29 blocks in 7 districts to more than one lakh farmers cultivating 50,000- plus hectares across 84 blocks in 15 districts. There are plans of expanding this programme across 142 blocks in Odisha’s 19 districts between 2022-23.

India celebrated 2018 as the year of millets and introduced a resolution leading to the United Nations general assembly’s adoption of 2023 as the International Year of Millets. This can also be dovetailed to multiple targets under the Sustainable Development Goals, such as zero hunger (Goal 2), good health and well-being (Goal 3), and climate action (Goal 13), among others. But to succeed, bottom-up feedback loops need to be in tandem with top-down decision flows. More importantly, care and caution need to be taken to guard against vested interests such that the focus remains on addressing the concerns of marginal lands, vulnerable populations, and neglected crops.