Ukraine has earned a future in the European Union 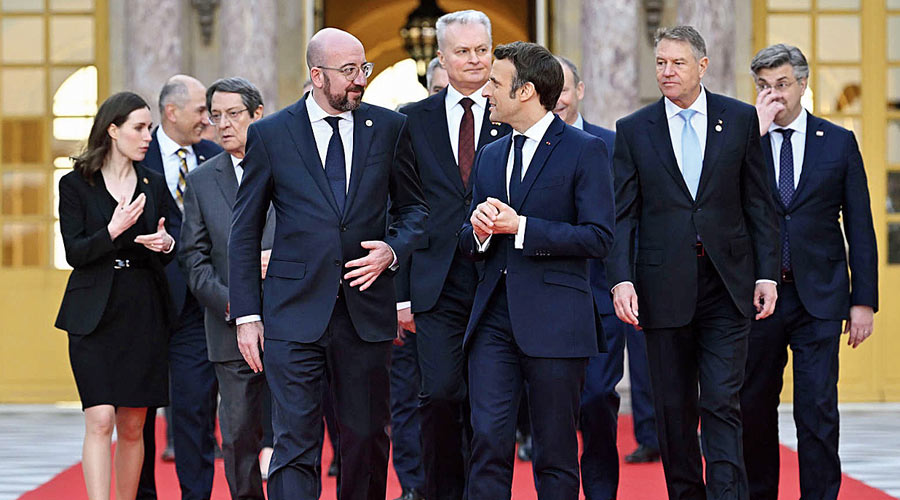 France's President Emmanuel Macron (3rd R) speaks to President of the European Council Charles Michel, followed by EU leaders at the Palace of Versailles, near Paris, on March 10, 2022, prior to the EU leaders summit to discuss the fallout of Russia's invasion in Ukraine.
Photo by Ludovic MARIN
Timothy Garton Ash   |   Published 27.03.22, 12:11 AM

For 77 years since 1945, people have compared this or that European figure to Adolf Hitler. For 77 years, this has been indefensible hyperbole. Even the genocidal war crimes in former Yugoslavia, although comparable in quality to those  committed by the Nazis, did not have the same scale or consequences. Now, when applied to Vladimir Putin, this seems for the first time an appropriate comparison — not yet to the Hitler of the Holocaust, but to the Hitler of 1939, invading Poland.

Every hour we see, as live video clips on our mobile phones, scenes from the Second World War. The rubble of bombarded cities. Killed and orphaned children. The treks of refugees. All this is justified by a big lie that turns history on its head. An attack on a Jewish president of Ukraine, whose grandfather fought in the Red Army against Hitler, is described by Putin as ‘denazification’. So is a missile landing on the site of the Nazis’ 1941 Babyn Yar massacres. All the while Ukrainians tell us on the radio, in fluent English, how they face death to defend their homeland, freedom and Europe. Yes, Europe, they keep saying that word.

With its superb resistance, Ukraine has already transformed its image across the world. People will never forget the civilians standing in front of Russian tanks — Tiananmen’s ‘tank man’ repeated a thousandfold. The defenders of Snake Island telling the Russian invaders to ‘go f***k yourself.’ The common humanity of Ukrainian volunteers telephoning mothers in Russia to tell them their captured soldier sons are still alive: “Natasha, he’s okay.” “There are some things worth dying for,” says a lawyer participating in the territorial defence of Kyiv on a Zoom webinar hosted in Oxford. I hear an echo of Václav Havel in the 1980s; but now the speaker might actually be killed tomorrow.

Ukraine has already done for most Europeans, who sit safely inside NATO, the European Union or both, this great service: to wake us up, at last, to the dangerous world we’re in. The transformation of German policy, in particular, and the resolute determination of Chancellor Olaf Scholz and President Emmanuel Macron to build a Europe with all three dimensions of power — military as well as economic and cultural — this, too, we owe to the Ukrainians’ determination to resist Putin’s war of recolonization.

So this is what Ukraine has done for Europe. What will Europe do for Ukraine?

“Do prove that you are indeed Europeans” — thus did the Ukrainian president, Volodymyr Zelensky, challenge EU leaders, in a passionate, unscripted video address to the European Parliament, delivered from his spartan wartime office in Kyiv. The European Parliament replied with a motion saying that EU institutions should ‘work towards’ granting Ukraine the candidate status the Ukrainian president has asked for in all his wartime conversations with EU leaders, but ‘on the basis of merit’. Merit? Honestly, what greater ‘merit’ could there be than being prepared to lay down your life to defend the fundamental values of human dignity, freedom, democracy and human rights enshrined in Article 2 of the EU treaty?

The European Council president, Charles Michel, boldly responded that “We will analyse the request from Ukraine.” Well, thanks for the great solidarity, Charles — President Zelensky might say — but I may be killed by a Russian bullet while you are still analysing. The contrast between the language of these two Europes, the Europe of peacetime bureaucratic process and the Europe of wartime existential struggle, is acute. The only adequate response from Europe’s core political community to the besieged Ukrainian president’s explicit request is for EU leaders to say that Ukraine — fighting as it is to defend European values — is immediately accepted as a candidate for EU membership. They should have done this at their summit in Versailles (picture), thus giving ‘Versailles’ a new symbolic meaning, beyond that of the punitive peace treaties after the First World War.

There are both short and long-term reasons for taking this extraordinary step in extraordinary times. First, it is something that European countries can actually do without going to war with Putin. The fact that Zelensky keeps raising the issue shows its significance.

I pray for a Miracle on the Dnipro, an actual Ukrainian victory, analogous with the ‘miracle on the Vistula’ in the Polish-Soviet War in 1920. We should do everything we still can to help the Ukrainians in their fight. But unless there is a palace coup in the Kremlin or Putin feels compelled to change course, both of which seem unlikely, the hard truth probably is that neither side can win this war. The Ukrainians will never allow their country to be taken over by Russia. They will fight as insurgents with guns but also with countless acts of civil resistance, on the streets, in the fields, in the hills. But they cannot militarily defeat the overwhelming brute force of Putin’s Russia.

Therefore, sooner or later, there will come that morally abhorrent but necessary moment when someone has to sit down with the representatives of a war criminal to negotiate peace. If President Zelensky is prepared to concede his country’s neutral status, as he has already hinted, if only for a specified period, then he must have something of major historical importance to show his own people that their sacrifice has not been in vain. This could be it. Only the Ukrainians have the right to make this painful call — but the offer has to be there from European leaders. People often say that the EU was originally a peace project. Let it again contribute to peace.

The actual journey to joining the EU would take many years and face many obstacles. Just ask the candidate countries in the western Balkans. But the protracted and quite properly demanding accession process would give a framework in which Ukrainians could continue their peacetime work to build a strong, prosperous European democracy — and one to which the millions of Ukrainian refugees now fleeing westward would wish to return. Otherwise, Putin will erect a new Iron Curtain and Ukraine will be behind it.

Last but not least, and in the long term, this would mean that the Kremlin eventually has to give up its Putinian delusions of rebuilding the Russian Empire. Occupying Ukraine, Russia would still be an empire. Liberated from the burden of oppressing others, Russia can itself set out on the long journey towards being a major European nation state, having a special relationship with the EU and NATO, and not a satrapy of China.

Unless the EU makes this courageous move, the message from West European capitals to besieged Europeans in Kyiv and Kharkiv is, in effect, ‘thank you for the way your heroic struggle is helping us create a more united, stronger Europe, but there’s no place in it for you.’ In this moment of existential challenge, Europe can do better than that.