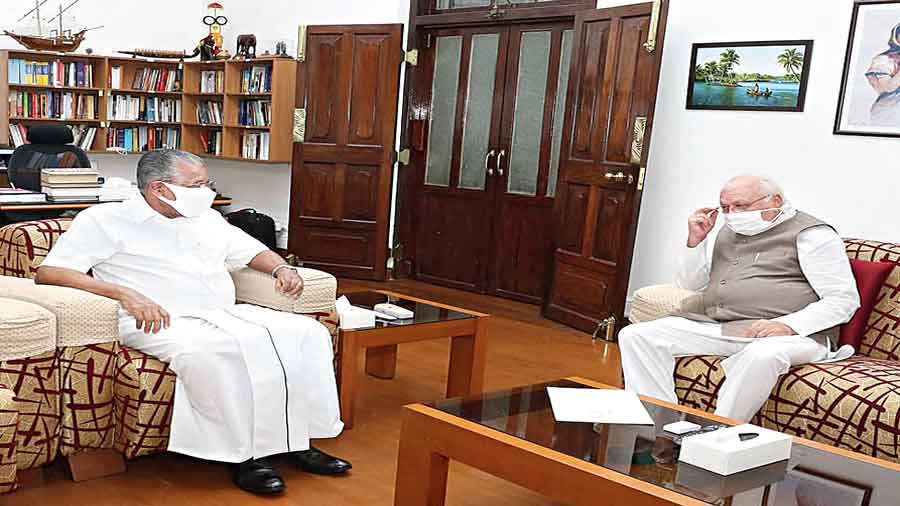 Kerala has seen many bitter altercations between state governments and governors. This is not unusual in states where the party in power is opposed to the ruling dispensation at the Centre. Yet, the ongoing spat between the 17-month-old Left Democratic Front government and the governor, Arif Mohammed Khan, has assumed unprecedented dimensions. For the first time in Kerala’s history, the governor held a two-hour-long media conference at the Raj Bhavan on September 19 to attack the government and the chief minister, Pinarayi Vijayan.

Crossing constitutional restraints, Khan slammed the government’s various policies and said the LDF’s ideology is of “foreign origin” that believed in violence as a legitimate political tool. The chief minister has now accused the governor of having political ambitions and being a tool of the sangh parivar to destabilise his government. Khan has indicated that he wouldn’t sign the government ordinances intended to curtail the authority of the governor as university chancellor and alter the constitution of the Lokayukta.

A veteran with a half-a-century-long chequered political career, Khan has deployed all the tricks of brinkmanship in the ongoing war of attrition. What’s new is the high-decibel clash between the governor and the chief minister. The state’s two highest functionaries had refrained from attacking each other until now. This continued even when the governor clashed many times with the Communist Party of India (Marxist) or the Congress since he took over in September 2019. But on September 15, the governor took on the chief minister personally for the first time, accusing him of nepotism. Khan was referring to the controversial appointment of Priya Varghese as associate professor of Malayalam at the University of Kannur, allegedly overlooking more deserving candidates. Varghese is the wife of K.K. Ragesh, the CPI(M)’s former Rajya Sabha member, who is now the chief minister’s private secretary.“Can anyone believe the Chief Minister didn’t know this?” Khan asked. He also said he wouldn’t allow executive interference in universities.“I had said earlier I will give up my chancellor position. And I still do not want to continue, but if I’m the chancellor, I will not be a rubber stamp.”

Vijayan hit back immediately, calling the governor’s outburst ridiculous and not befitting his office. “I don’t know what is happening to him. He seems to be venting his frustration from some of his plans getting defeated. Mr Khan should examine himself or get himself examined.” Vijayan asked how a chief minister could know every detail about the family members of his staff. “Besides, is being the wife of my staff a disqualification?” he asked. Quoting the Constitution and landmark judicial verdicts, Vijayan said the governor’s words and deeds had no constitutional validity.

Khan promptly returned the fire, saying he was happy that Vijayan had ended his proxy war and come out in the open. Two days later, he held a media conference at the Raj Bhavan and repeated his allegations. The governor also presented visuals and letters by the chief minister claiming to bolster his charges. He accused Vijayan, Ragesh, and the UoK vice-chancellor, Gopinath Ravindran, of condoning or helping many wrongdoings, including an alleged attempt to assault him at the Indian History Congress’s 80th session held in the UoK in December 2019. The session witnessed livid altercations between the governor on one side and many delegates, including the historian, Irfan Habib, on the other. Some delegates also heckledKhan by shouting slogans and raising placards when he defended the Citizenship (Amendment) Act and the Narendra Modi government in his inaugural speech. Setting aside his written text, Khan had countered the charges made by the earlier speakers against the CAA, including Ragesh, who was then a Rajya Sabha member. He later accused Ragesh of preventing the police from stopping the hecklers. Khan blamed Ravindran for allegedly joining the then 88-year-old Habib in trying to assault him physically and tearing up his security officer’s uniform. Khan said it was an attempt to murder! Habib, the IHC’s outgoing chairman, who was on the dais, had walked up to Khan when he quoted Maulana Abul Kalam Azad and told him to quote Nathuram Godse instead. This enraged Khan, and both exchanged angry words until Habib was persuaded to return to his seat by Ravindran. Khan also suggested that the chief minister, who holds the home ministry portfolio, had prevented the police from registering a case of heckling against him which was a cognisable offence. Khan had earlier called Ravindran a “criminal” and Habib a “goonda”. Khan said his hecklers were not from Kerala but from Jawaharlal Nehru University and Jamia Millia Islamia and that the show of placards pointed to a conspiracy against him. The IHC reportedly dismissed Khan’s charges, saying it made special arrangements for his security at the cost of Rs 8 lakh.

But the most awaited moment at the governor’s crowded media conference was his promised presentation of visual evidence of the ‘attempt to murder’. But that turned out to be a bummer with nothing more than what the television channels had showed earlier. Khan also read out from letters of the chief minister assuring him of non-interference with the governor’s authority as chancellor. Khan accused Vijayan of reneging on his promise as the government is moving to bring in ordinances to curtail his powers as university chancellor. He also revealed that Vijayan had personally requested him to extend Ravindran’s tenure as the vice-chancellor.

Coincidentally, Khan’s detractors at the IHC figure in Varghese’s appointment issue, providing him with a perfect target. Varghese’s husband, Ragesh, was the first to provoke Khan at the IHC by speaking most vociferously against the Modi government. Habib and Ravindran had been among the left-wing historians at the Indian Council of Historical Research with whom the first Modi government had a major spat in 2015. Ravindran, who was then a professor at Jamia Millia, had resigned as the ICHR’s member secretary, alleging saffronisation of the ICHR.

Khan’s outburst against the government has, once again, raised perennial questions regarding constitutional federalism and the authority of the governor vis-à-vis the state government. The CPI(M)’s declaration of war against Khan is reminiscent of the call by the Jyoti Basu government in Bengal in 1984 to boycott the then governor, A.P. Sharma, for his rejection of the names proposed by the government as vice-chancellors of the universities of Burdwan and Calcutta and withholding consent to the Calcutta University amendment bill.

Even as the CPI(M)’s fusillade against Khan gathers steam, the Bharatiya Janata Party has run to his defence. Caught in the crossfire is the Congress, which, while opposing the government, doesn’t want to appear to be friendly with Khan who never misses an opportunity to flaunt his closeness to the BJP and the Rashtriya Swayamsevak Sangh. Even while the controversy was raging, he took time to meet Mohan Bhagwat, the RSS sarsanghchalak, who was visiting Kerala. “What’s wrong in it? I have been close to the RSS since 1986,” he said.

Meanwhile, Khan’s infatuation with the media appears to be over after he faced irritating questions at the Raj Bhavan meeting. The next day, he said he wouldn’t speak to the Kerala media, saying it had no self-respect because it failed to respond fittingly to the chief minister even after he ordered them out of a conference five years ago.

(M.G. Radhakrishnan, a senior journalist based in Thiruvananthapuram, has worked with various print and electronic media organisations)