Advertisement
Home / Opinion / Quite a leap — forward? — for the Chinese Communist Party

Quite a leap — forward? — for the Chinese Communist Party

In the 10 days before the 70th anniversary of China's liberation, 22 strikes took place across the country 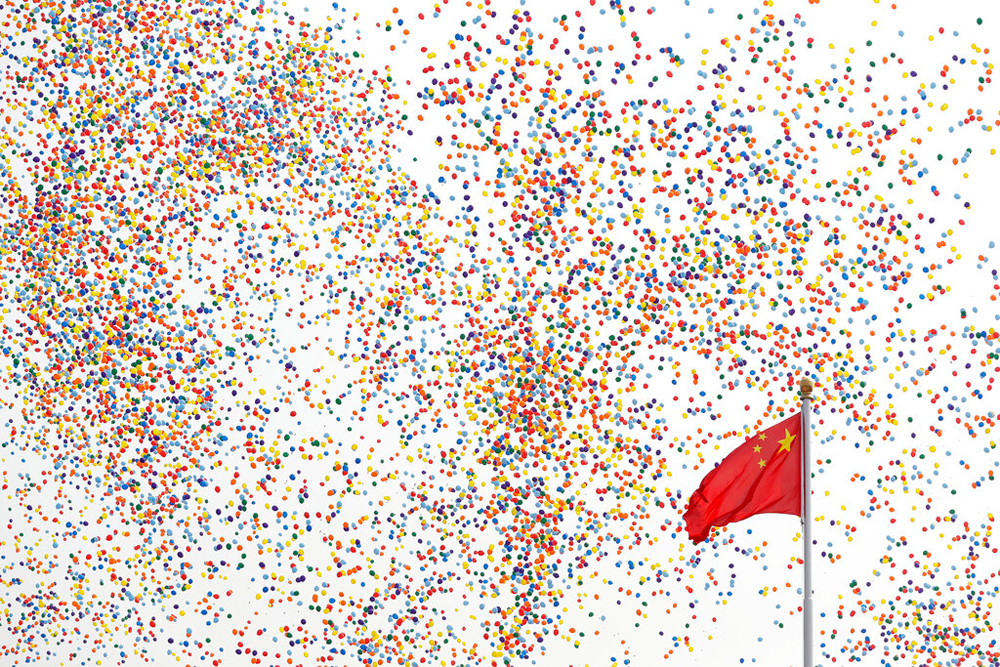 Balloons are released during a parade to mark the 70th anniversary of the founding of Communist China in Beijing on October 1. Chinese wisdom does not consider the right to freedom of expression a human right
(AP photo)
Neha Sahay   |   Published 06.10.19, 08:15 PM

October 1 marked 70 years since China achieved liberation, and the celebrations were befitting of the global status it has acquired today. Beijing was aglow with flowers and a spectacular new bridge on its main avenue. A 1,00,000-strong rally, in which people from all walks of life participated, and a military parade with 15,000 troops, 160 aircraft and 580 weapons systems, most of them built indigenously, dazzled the country. Presiding over this display was the country’s supreme head, who has made himself ruler for life.

To celebrate the occasion, the official newspaper carried excerpts from an official White Paper listing the ‘Progress of Human Rights in China since 1949’. The list of human rights ranged from “living a happy life” to “rights to subsistence and development”, from workers’ rights to rights of ethnic minorities, including their religious rights; and the right to a fair trial. “Poverty is the greatest obstacle to safeguarding human rights,” said the article, and went on to cite statistics showing the marked increase in well-being, education and jobs since 1949. The feature also included the observation that China now “offers Chinese wisdom and solutions for global governance of human rights”.

Obviously, Chinese wisdom does not consider the right to freedom of expression a human right. As for the other rights, just at the end of last month, a dissident who had publicly demonstrated in July asking Xi Jinping to resign and implement universal suffrage, died in detention, becoming the fifth dissident to die in custody since 2014. So what happened to the right to a fair trial?

In the 10 days leading to October 1, 22 strikes took place across the country, mostly by construction workers demanding wage arrears. Truck drivers, security guards and hotel workers also went on strike over the same demand. No union took up their cause. What happened to workers’ rights?

Then there is the unending turmoil in Hong Kong, where a teenage protester was shot by the police as violence erupted on National Day, observed there as the ‘Day of Grief’. The shooting expectedly provoked even larger protests, with schoolchildren joining in. Nothing the mighty Xi Jinping does seems to mollify the protesters. Public property is regularly targeted; yet, there is no loss of support for the agitators among Hong Kong citizens.

Interestingly, 10 Hong Kong police officers were special guests at Beijing’s National Day ceremony, including the sergeant who pulled a gun on protesters in July. He did not fire the weapon, although he was surrounded by a violent and angry mob. But that one act changed his life, making him a villain in Hong Kong, and a hero on the mainland. At the receiving end of hate messages and even death threats, the officer is considering moving to the mainland after retirement.

Contradictions were written all over the celebrations. The spirit of inclusiveness could be seen in many little ways. The parade began with a 70-gun salute from 56 cannons, each representing the country’s 56 ethnic groups. Among the 1,00,000-odd citizens who marched in the people’s parade, waving flags and flowers, were those normally left out, such as delivery men and square dancers — elderly people who dance everyday at public plazas.

But on the ground, what did these gestures mean? For the ethnic minorities in Xinjiang and Tibet, National Day only meant harsher surveillance than there normally is. Workers and farmers today constitute only a third of the ordinary membership of the ruling party, compared to two-thirds under Mao Zedong. Executives and corporate bigwigs have replaced them. That is indeed quite a leap — forward? — for the Chinese Communist Party since 1949.