Qatar hosting the football World Cup is not without controversy 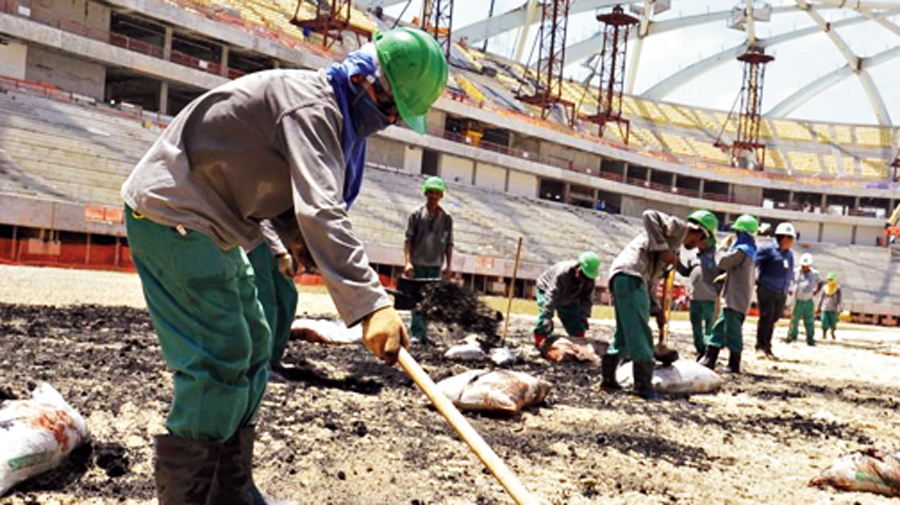 On February 23, 2021, a report in The Guardian stated that more than 6,500 migrant workers from India, Pakistan, Nepal, Bangladesh and Sri Lanka have died in Qatar since it won the right to host the World Cup 10 years ago — a direct consequence of abuse and exploitation of migrant workers, including ‘heat stress’ as reported by the United Nations in 2019. This figure was compiled through data made available by the governments of these countries. While these 6,500 deaths cannot be ascribed directly to the building sites, a significant proportion of migrant workers were in the country because of the approaching World Cup. The total number of casualties linked to the upcoming 2022 World Cup is, of course, higher as it does not include people from other countries, such as the Philippines. The vast majority of these deaths are filed as ‘natural’ since no autopsy is provided. As The Guardian and Amnesty International pointed out, there is a distinct lack of transparency in recording deaths in Qatar. In the wake of these revelations, before their qualifying game against Gibraltar, the football players of Norway sported T-shirts defending human rights. German players followed suit before their game against Iceland on March 25, as well as the national teams of Denmark and the Netherlands. Are these the first signs of a possible boycott of the World Cup? Although Norway may not qualify, the interesting feature of this movement is that it has been initiated by the players themselves.

There have been numerous attempts — some have been successful — to boycott mega events such as the World Cup or the Olympic Games. Indeed, these events, which generate global media exposure, constitute an echo chamber equally for activists and for the organizing country or city. They also provide authoritarian regimes or dictatorships with an opportunity to whitewash their crimes and build international goodwill. Two years after the junta seized power in Argentina, it organized the 1978 World Cup. Attempts to initiate a boycott failed. In France, a committee for the boycott of the World Cup was launched, hoping to persuade the French national team as well as other European teams not to participate in a tournament, which was held under a ruthless military junta — the River Plate stadium, where the final was played, was one kilometre away from the largest torture centre of the dictatorship. Although the boycott was unsuccessful, the awareness for the crimes of the junta was certainly enhanced by the European campaign. More significantly, as shown by the social anthropologist, Eduardo P. Archetti, Argentina later developed ambivalent feelings towards the event, torn between the joy of a country obsessed with football having won the greatest prize of all and the anguish generated by the torture and the death of about 30,000 of its citizens.

The most resounding failure of boycott in sports is provided by the 1936 Berlin Olympic Games. Activist groups, particularly in the United States of America, had been advocating a boycott of the Games, notably in opposition to the anti-Jewish laws. But the president of the International Olympic Committee, Henri de Baillet-Latour, with support from the president of the American Olympic Committee, Avery Brundage, managed to uphold the idea that the Games should be left independent of politics. Token gestures were proffered on both sides (there was one half-Jewish athlete in the German team, while Jewish athletes or athletes of colour were made officially welcome, even as they were closely monitored by the German police). In 1934, the US confirmed its participation in the Games, which probably prevented other nations from boycotting them. The only gestures of dissent were taken at individual level. The staging of alternative Games, first in Barcelona and, then, in New York, flopped. While a boycott by the main nations would have prevented Hitler from using the Games as a powerful propaganda platform, the decision was in keeping with the general policy of appeasement towards Nazi Germany. More recently, a boycott of the 2014 Sochi games had been advocated to oppose Russia’s anti-gay legislation, which was in contradiction of the Olympic Charter — it states the incompatibility of any form of discrimination with membership of the Olympic movement. While no boycott took place, some athletes opted for shows of dissent. Nor was this the only issue connected with the Sochi Olympics — it is likely that hundreds, perhaps thousands, of Uzbek workers died on Olympic construction sites.

On the other hand, the two successful boycotts of the Games, Moscow 1980 and Los Angeles 1984, were prompted by a strong political stance taken by the American administration. The 1980 Games were boycotted by 62 nations, officially to oppose the Soviet invasion of Afghanistan, as well as to look back at the participation in the 1936 Games as a mistake. But the US administration had been contemplating a boycott well before the invasion of Afghanistan as a way of addressing human rights issues in the USSR. Similarly, the boycott of the 1984 Games by the Soviet bloc countries was brought about by the fear, played up by the Reagan administration, that the US would help athletes defect to the West.

So why do boycotts fail? The first reason is the alleged ‘ignorance’ of the political situation in a given country. Even football players who went on to have a political career, such as the Argentinian, Ricardo Villa, claimed not to have known about the reality of torture and repression in the country at the time of the 1978 World Cup. This connects with the larger argument, heralded by many Olympic officials following the founder of the Olympian movement, Pierre de Coubertin, of the apolitical nature of the Olympic Games and of sports in general. This enduring myth suggests that sports are ahistorical, universal, and the purveyors of peace and fair play. Ignoring all of the national, economic, and, indeed, political interests involved in the organization of and participation in global sporting events, the leaders of international sports tend to repeat the mantra that politics and sports do not mix. The neutral dimension of sports is systematically put forward, under different forms, which may include arguments in favour of ‘opening up’ political regimes thanks to sporting events, or invoking Olympic values and ideals in the face of political protests. In the absence of strong national leadership on the issue of boycott, these arguments tend to win the day.

Where does this leave the prospect of a possible boycott of the Qatar World Cup? From the beginning, Qatar’s bid has given rise to grave concerns. The surprising awarding of the most important football competition to a country with no footballing history and an indifferent national team, customary accusations of sleaze and corruption in the awarding of the tournament, the possibility that a summer competition could be played in a country with temperatures in the high 40s, the ecological disaster of building air-conditioned stadiums (not to mention a new airport, roads, hotels, and a new city, which will host the World Cup final), and the allegations of support of extremist groups in the region are now compounded by the tragic human costs of building the World Cup facilities. Will the fact that the threat of a boycott originates from the players themselves, or that the very organization of the competition is tainted with the blood of the workers, bring a successful outcome for the boycott? In the absence of a strong political stance, such as that of the US at the end of the Cold War, this possibility is, sadly, doubtful.