Politics over pandemic in Bengal

With another election round the corner, Mamata Banerjee has to recharge her support base during the festive season 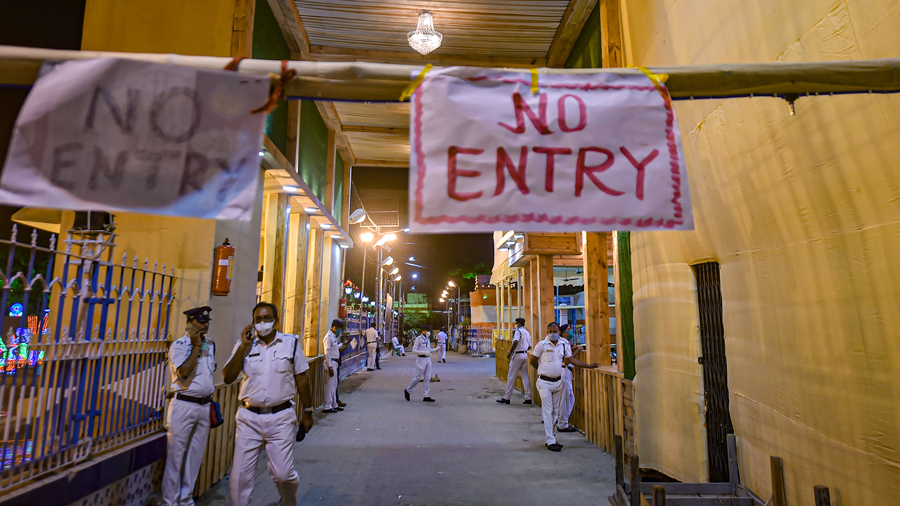 Police personnel stand guard near the barricades set up at a Durga Puja pandal in Kolkata,Wednesday, Oct. 21, 2020. The Calcutta High Court on Wednesday partly modified its order on community Durga Puja amid the Covid-19 pandemic.
PTI
Jawhar Sircar   |     |   Published 23.10.20, 01:24 AM

It is a pity that after managing to control the rates of infection, recovery and mortality from the coronavirus reasonably better than five other comparable metropolises, Calcutta now appears determined to tease its fate during Durga Puja. When the coronavirus appeared in tiny numbers, knee-jerk, unplanned, nationwide lockdowns were clamped down with a lot of drama, with politics and image-building taking precedence. The social media was inundated with hate-filled messages targeting West Bengal’s special incompetence in combating the pandemic, ignoring the fact that most other states were floundering as well. There were whispers that deaths were being hushed up here. To prove this, morbid visuals of the corpses of ‘corona victims’ being flung around insensitively were pumped into our mobiles. It was obvious that a professional, well-financed campaign was underway to seize power next summer. Instead of rushing much-needed testing kits and protective equipment, the Centre sent inspection teams led by an about-to-be-promoted bureaucrat who, unfortunately, joined the chorus to savage Bengal’s initial efforts. The state’s containment strategy was not faultless but the data published by the Centre could not substantiate the charge that Bengal was India’s worst performing state in the war against Covid-19.

Many, therefore, simply fail to comprehend why West Bengal is suddenly going lax on large gatherings and social mixing during the Pujas, thereby inviting disaster. The chief minister has also ramped up her ‘assistance’ to 36,946 Puja organizers to Rs 50,000, up from last year’s sum of Rs 10,000. This may cost a staggering 185 crore of taxpayers’ money so that grander pandals attract several thousands more — knowing well that this vicious virus thrives on crowds. The usual homilies about wearing masks and maintaining ‘social distancing’ have been dished out, but massive crowds of Puja shoppers sans masks surely indicate what lies ahead. The Calcutta High Court has, however, intervened and has mercifully ordered strict control over numbers of visitors at the pandals but large crowds roaming everywhere else would be equally vulnerable. It has also directed that 75 per cent of grants must be spent by Puja organizers on masks, sanitizers and protective equipment. There is concern regarding their distribution at the pandals as freebies invariably trigger genetically-driven scrambles.

A couple of years ago, there were accounting issues regarding an estimated Rs 700 crore that the state government had given to ‘sports clubs’ over five years or so. Besides, government grants given to any one religion militate against secularism — the old haj subsidy being a case in point. We may also recall that the Indian Muslim community has, by and large, accepted the rigorous post-corona stipulations. During Ramazan this year, it did not insist on the usual bustling evening food markets. This faith was reconciled to the ban on massive congregations for namaz on Eid, even refraining from fraternal hugs, community meals and Muharram processions. Maharashtra, Goa and Karnataka, ruled by pro-Hindu parties, imposed stringent prohibitions on crowds during the Ganapati festival. Kerala, too, attempted to tone down Onam celebrations. It appears that Bengal could be a spoilsport and may be accused, with or without evidence, of giving fresh life to the pandemic.

Politics has, however, its own bizarre compulsions. The prime minister, who had imposed a draconian lockdown and has reminded us again to avoid crowds during Covid 19, is now hell-bent on addressing public meetings in poll-bound Bihar. His election rallies will surely draw enormous gatherings and all his sage counsel on social distancing delivered theatrically on television is likely to be ignored. His teflon may succeed in deflecting the blame for spreading Covid-19 on someone else, but Mamata Banerjee may not be that lucky if hospitals here cannot handle the unprecedented rush in patients. Her compulsions are, however, different. To understand them, we have to go back to the 34 years when the Left Front ruled Bengal without any serious challenge. The Communist Party of India (Marxist)’s ‘local committees’ exercised a complete grip on localities. Their skilful sub-allocation of specific tasks to cells meant that every voter on the electoral roll was tracked. During elections, these local committees mustered not only supporters but also ensured that dead or absent electors ‘voted’ through proxies.

Mamata Banerjee could dislodge the regime because she developed an alternative ‘grassroots’ — trinamool — response. She came up with a network of dedicated local-level field units, consisting of Puja-organizing clubs. These had been ignored by most Left parties that stayed away from religion — leaving, thereby, the only gap in their impregnable fortress. This vacuum was filled by Banerjee’s ‘clubs’ that took on the local committees and started responding actively to her calls for street-agitations and road blockades against the Left Front regime. Her model of agitational politics finally found its feet with the help of these local clubs, which provided her with a solidarity with local voters. She and her supporters also bonded through subaltern community feasts and soon enough many other deities were added to the calendar of celebrations. With an assured following, she could finally knock the Marxists off their perch.

With another election round the corner, Banerjee has to recharge her support base during the festive season. For Modi, Didi and their flocks, it is now ‘payback time’ — corona be damned.