Public spaces belong to the people, and decisions that affect them should be taken only with their approval 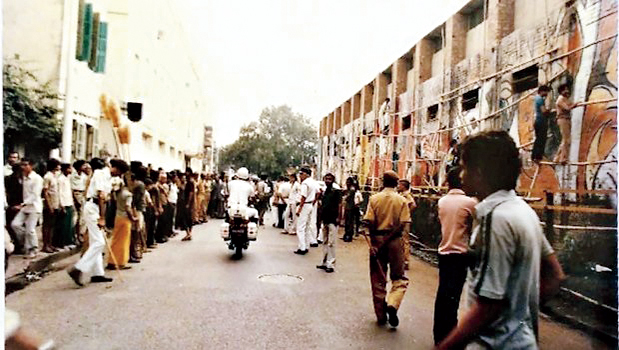 Renowned artist Shanu Lahiri painted city walls as part of her "Love Calcutta" project in the 1980s
The Telegraph file picture
The Telegraph   |   Published 09.12.18, 10:02 AM

Sir — A mural on a 200-metre-long wall along Justice Chandra Madhab Road that had been painted by the renowned artist, Shanu Lahiri, and her team in 1985 has been wiped out. In its place, the wall now wears the monotonous shades of blue that have come to represent the ruling dispensation in West Bengal. This is painful for people who grew up in a Calcutta that was known as the cultural capital of the country.

The act of painting over the wall reeks of political motive. It is the same mentality that led to the dismantling of the Parama statue, also by Lahiri, to make room for the Biswa Bangla logo in 2014. How is this plunder of Calcutta’s heritage any different from the renaming of places being undertaken by the Bharatiya Janata Party governments? More worrying than the corruption of politics is the silence of artists and civil society and, in some cases, their complicity in this destruction of the past.

Sir — How could a city that prides itself as the cultural capital of India do something as thoughtless as erasing a mural by an artist of Shanu Lahiri’s calibre? She was not just an artist but also a philosopher, a feminist and a champion of human rights. She used her art to build awareness about social issues. Her project, Love Calcutta, changed the image of the city in the international community.

The damage that has been done through the destruction of her mural is irreparable. This should never be allowed to happen again. Decisions that affect Calcutta’s public spaces should be taken only after they have been approved by citizens. Public spaces belong to the people, who should be assured that before chasing some misplaced idea of development, city officials will take a moment to consider the uniqueness and preciousness of what they have been bequeathed.

Sir — The chief minister of West Bengal claims to be an artist and seems to be a great patron of the arts. How is it that one after the other work of art by an artist of Shanu Lahiri’s repute is disappearing from this city? It is a grievous loss. Lahiri’s artworks were emblematic of various localities in Calcutta, whose residents were proud to be living in a city where art did not reside only within the confines of galleries but was part of its public spaces. Even though it will not bring back the mural, the chief minister must take those responsible for its defacement to task.

Sir — The kitchen is not just the woman’s domain. That is only the oldest excuse in the book to keep her within the confines of the home, burdened with the responsibility of feeding her family. The adage is conveniently done away with in the hospitality industry — still dominated by male chefs — where there is money to be made from cooking. Given the advance in science and technology there are now gadgets which have reduced cooking to the pushing of a few buttons. There is no reason why the men in the family should not share the responsibility of putting a meal on the table — literally.

Sir — Hanuman has a sizeable following among Hindus. In order to exploit the religious sentiments of people, the chief minister of Uttar Pradesh claimed that Hanuman was a Dalit who lived a life of deprivation in the forest. It is not surprising coming from a member of the Bharatiya Janata Party which specializes in creating division among people. If it is Hanuman who is being assigned a caste today, the time is not far when Jatayu, a bird, or the squirrel who helped Rama build a bridge to Lanka will also be made part of one or the other caste. All for the sake of garnering votes by playing the caste card.

One is unable to understand why instead of focusing on development, employment, eradication of poverty, and ensuring women’s safety, the BJP is always harping on religion. Is it because of its abject failure in those fields?