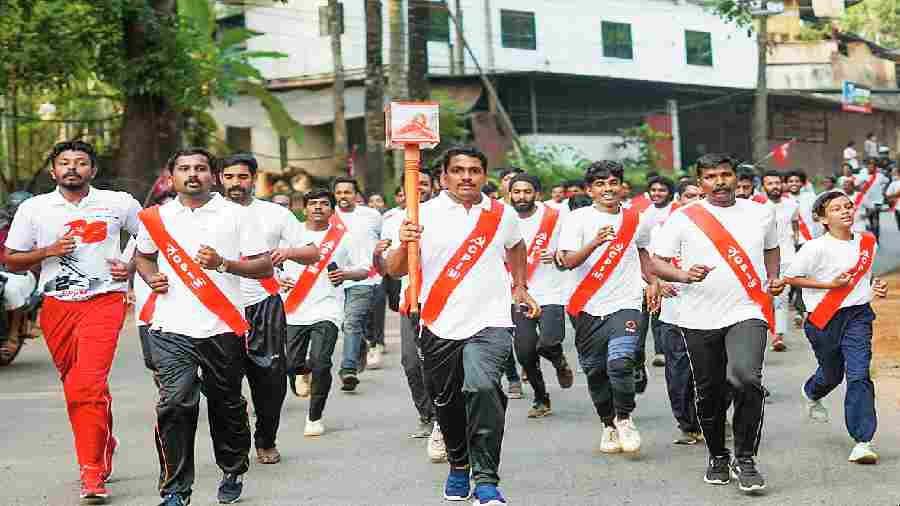 Until some time ago, it wouldn’t have raised any opposition in Kerala. It would have even been hailed as another right step forward. But today, religious groups not only publicly assume conservative positions but even the Communist Party of India (Marxist), the loudest claimant for Kerala’s progressive legacy, also gets caught on the wrong side. This is only the latest among Kerala’s many recent signs of stepping backwards.

Joisna Mary Joseph, a nurse in Saudi Arabia, had come on leave to her home in hilly Kodenchery in Kozhikode district in March. On April 9, she was found missing, according to her parents. Calls to her phone went unanswered. The parents registered a complaint with the local police. A few days later, Joisna appeared before the local court with M.S. Shejin and said they were in love and were about to marry. Joisna posted this later on her Facebook page too.

The affair became a major controversy in Kerala, with top leaders of political parties, religious organizations, and the media joining the fray. The reason? The religions to which Joisna and Shejin belonged. Joisna is a Christian — a Roman Catholic — and Shejin a Muslim. To add to the spice, Shejin happened to be an area-secretary of the Democratic Youth Federation of India, the CPI(M)’s youth wing. It triggered a row in the region, with local church leaders expressing apprehensions. They argued that Joisna was being held forcibly by Shejin with support from the ruling CPI(M) and Muslim groups. They suspected it was another case of ‘love jihad’, which Kerala’s Catholic church has been complaining about for long. Still, the affair didn’t evoke attention beyond the village, which had an equal presence of both Christians and Muslims.

But all hell broke loose when George M. Thomas, a prominent CPI(M) leader from the region, expressed displeasure over the affair. “Their elopement has hurt the relations between religions,” Thomas, a two-time CPI(M) legislator, told a news channel. Thomas even said that ‘love jihad’ was not non-existent in Kerala, although not to the extent claimed by organizations like the Rashtriya Swayamsevak Sangh. He also added that in its internal documents circulated last September the CPI(M) had stated that girls in professional colleges were being lured by fundamentalist groups.

This kicked up huge headlines and the CPI(M) was blasted on social media for parroting the RSS and the Catholic church. Thomas was accused of being the CPI(M)’s bridge with the powerful Syro-Malabar Church and it was alleged that he had won elections with its support from the region, which was once a stronghold of the Congress and the Muslim community. Muslim organizations, too, went for the CPI(M)’s jugular. The next day, the CPI(M)’s Kozhikode district-secretary, P. Mohanan, launched a damage-control exercise. He said that Thomas’s comments on ‘love jihad’ were baseless and that the CPI(M) does not subscribe to them. “It was Thomas’s slip of the tongue. We firmly believe love jihad is completely the RSS’s propaganda.” At the same time, Mohanan said that Shejin, a CPI(M) member, should have informed the party before they lived together.

Thomas soon swallowed his earlier comments. “How would I say there was love jihad when my party and even the National Investigation Agency had ruled it out?” Sitaram Yechury, the CPI(M)’s general-secretary, clarified that an adult’s choice of a life partner is a fundamental right. A few days later, the CPI(M) issued a “public censure” against Thomas. The DYFI stated that it encouraged interfaith marriages and even ran a website for this. The Muslim League was not impressed. “It was not a slip of the tongue but a deliberate plan to divide minorities,” said P.M.A. Salam, the League’s state general secretary. The Jamaat-e-Islami sent a defamation notice to Thomas for saying that the organization was behind the luring of women. Some even asked whether the marriage of Veena Vijayan, the daughter of the chief minister, Pinarayi Vijayan, to Muhammed Riyas, the CPI(M) leader and the state minister for tourism, would be dubbed ‘love jihad’. The League leaders had forgotten that they had recently condemned the Veena-Riyas wedding as adultery.

By then, the SMC — India’s largest Catholic church with 4.25 million members worldwide — had begun to respond publicly. The first salvo came in the form of a lengthy editorial in the SMC-controlled 135-year-old Deepika, Kerala’s oldest surviving newspaper. It stated that although it may not be a case of ‘love jihad’, Joisna’s parents’ anxiety should be respected and the incident investigated. It slammed the CPI(M) for withdrawing its support to them under pressure from “fundamentalists”. It accused that Thomas was being crucified for speaking the truth. “the CPI(M) says Shejin should have informed the party before the decision. Why doesn’t the party recognise the girl’s parents’ right for the same?” asked the paper. It wondered how anyone could dismiss ‘love jihad’s’ existence when many non-Muslim women from Kerala were being lured into inter-faith marriages and taken to Afghanistan to work for the Islamic State. “They are still languishing in jails in Afghanistan. None of the progressives and secular parties helped when these girls’ parents were running around the supreme court and central government to save their daughters.”

Mar Joseph Pamplany, the SMC’s newly-anointed archbishop of the Thalassery Diocese to which Joisna’s family belongs, said that the church would stand by the parents. “Although all interfaith marriages may not be love jihad, it needed thorough investigation. There are many cases of girls being lured and used for terror activities,” he said.

The Bharatiya Janata Party, which has been trying to woo Christians for some time, has lent the SMC its support. Speaking at Mar Pamplany’s investiture ceremony, V. Muraleedharan, the Union minister of state for external affairs, said love jihad was increasing in number owing to support from the ruling CPI(M) and the Congress.

On April 19, Kerala High Court’s division bench dismissed Joisna’s father’s habeas corpus petition, saying that it would not interfere in her decision to live with a person of her choice as she was an adult. The court’s decision came after it interacted with Joisna. The couple has also informed the court that they will marry under the Special Marriage Act soon.

The SMC has been lamenting for some time about the increase in love jihad incidents although the state high court and, later, the NIA dismissed it. Last October, Mar Joseph Kallarangatt, the SMC’s archbishop of the Pala diocese, had said that “narcotic jihad” was spreading in Kerala, indicating that Muslims were spreading drug use in campuses. The statement had kicked up a huge controversy. Following widespread demands for action against the bishop, the police filed a case against him for fomenting hostility between religions.

What is new in this incident is the CPI(M)’s involvement with a leader caught echoing the Catholic church and the sangh parivar. Although it corrected the erring leader immediately, the charge that the party has been wooing its one-time opponents — Christian and Muslim religious organizations —  cannot be easily dismissed. The incident has also come on the heels of the recent blow to the CPI(M)’s progressive image when it tried to block a young couple from taking custody of their child born before their marriage.

( M.G. Radhakrishnan, a senior journalist based in Thiruvananthapuram, has worked with various print and electronic media organizations)