Iran's sense of itself must be factored into geopolitical ties

For Iran, the latest US sanctions are only a recent intensification of a process that began with the overthrow of the Shah, a key US ally 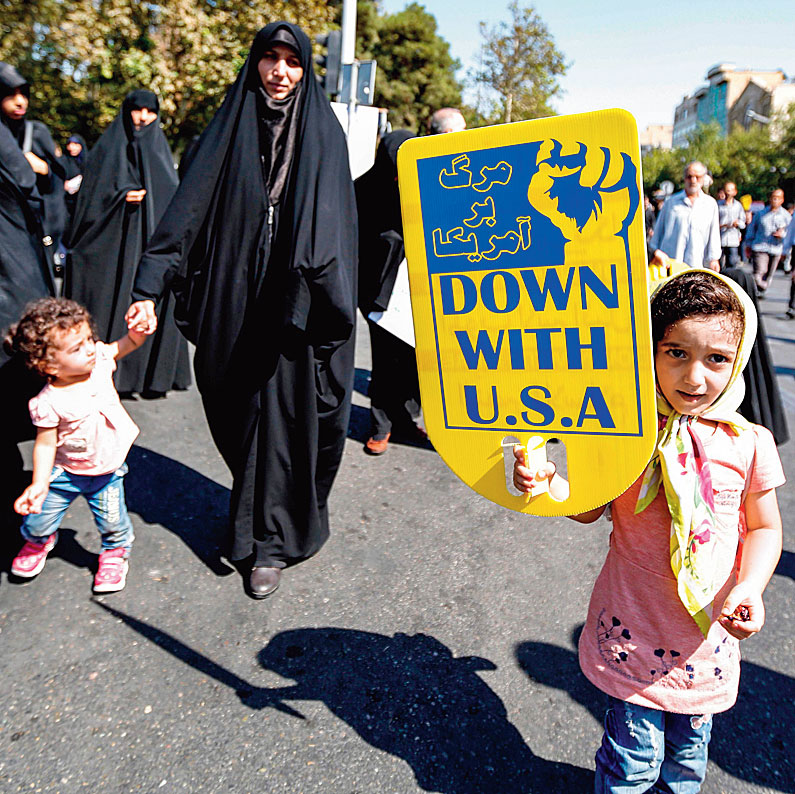 There was an undercurrent of tension in Aurangzeb’s court when news arrived of the arrival of an envoy from Iran. “The news that a Persian mission was coming caused a flutter in the Mughal Court. Everyone from the Emperor down to the meanest guardsman felt that he and his country were on their trial. His manners and conduct would be judged by the masters of social decorum in all Asia, and if he was found wanting in correctness of taste and proper dignity in the least particular, he would be made the laughing-stock of the entire Muslim world.”

In writing this description, Jadunath Sarkar endorsed a depiction of Persians being the “Frenchmen of Asia”. Persian manners and taste, this great historian of the Mughals noted, had, after all, been “laboriously, if sometimes clumsily, imitated” by all Islamic Courts “from Cordova and Constantinople to Delhi and Seringapatam”.

In the case of Iran, this sense of identity and, equally, its self-image as a regional hegemon are by no means only a medieval phenomenon. Recent Western characterizations of Iran’s exceptionalism have, however, been from the negative end. Late last month, the secretary of state of the United States of America said that “the Islamic Republic of Iran is not a normal State”.

This was in a State Department document titled Outlaw Regime chronicling what it described as Iran’s “Destructive Activities”, ranging from the clandestine development of nuclear weapons to supporting terrorism.

Iran is back on the international radar more centrally than at any time in the past few years with the US withdrawal from the agreement reached between Iran and the permanent five of the security council plus Germany. This agreement, reached in 2015, in effect, placed restrictions on Iran’s nuclear programme to prevent the development of nuclear weapons. In exchange, sanctions imposed on Iran by the European Union and the US were lifted or eased. The agreement was a triumph for the foreign policy of the former president, Barack Obama. That his successor would reverse it marks both the deep divisions in the US on how to deal with Iran as equally the disquiet with which key US allies — Israel and Saudi Arabia — viewed the agreement.

The timing of the release of Outlaw Regime is obvious enough: the last week of September comprises the high-level segment of the United Nations general assembly when the world’s leadership congregates in New York and US broadsides against Iran were one of its prominent features. There is, however, an unintended coincidence with an important milestone in Iran’s history. On September 22, 1980, an eight-year-long war began with Iraq’s invasion of Iran. The 20th anniversary of its conclusion had passed by largely unnoticed outside Iran, but the war had catalyzed and initiated changes whose impact on West Asia were profound and continue to this day.

The Iran-Iraq war was very much a late-20th-century war, but it was fought with a savagery and imagery that evoked older rivalries and animosities of Persian-Arab conflicts. For most Iranians, the war was consistent with an existing historical pattern: revolution having to battle counter-revolution — a precedent set by the wars that had followed the French Revolution of 1789 or the Bolshevik Revolution of 1917. But, as in the past, a war started to roll back the revolution ended up consolidating and internationalizing it. For revolutionary Iran, fighting the war was defending the Shia Revolution and, simultaneously, also safeguarding a Persian Islamic identity distinct from its Arab neighbours.

The Iran-Iraq war was a causal factor in the intra-Arab war that followed with Iraq’s invasion of Kuwait in 1990. This intra-Arab conflict acquired, for many, the character of a clash of civilizations when a US-led coalition defeated Iraq. If the metanarrative of the late 1980s and the early 1990s is of the end of the Cold War with the break-up of the Soviet Union, the sub-narratives of the time, too, have had a long afterlife: the rise of al Qaeda and other extremist groups being the most prominent among them. There is almost a linear track from this to the 9/11 attack, the overthrowing of the Taliban in Afghanistan, and the beginning of what has turned out to be the US’s longest war ever.

Fears of an Iran-led Shia crescent consolidated in the Arabian Gulf states after the US-led invasion of Iraq in 2003. For the US, the influence of Iran in a Shia-dominated Iraq, in Syria and in Lebanon is a major negative and unintended consequence of its own policies. For Saudi Arabia, there are even more direct concerns, and it sees its military action in Yemen as largely directed against Iranian proxies. Rolling back Iranian influence in the Arab world is its major, perhaps exclusive, foreign-policy goal. For Israel too, Iran appears as an existential threat — as much for Iran’s rhetoric as for the talent and capabilities of its people.

So the Persian ‘puzzle’ has numerous dimensions other than Iran’s nuclear programme. The roots of the US-Iran conflict essentially go back to the 1979 revolution and its consequences. For the US and Iran, the events of that time have been accurately described as a messy divorce — both parties being left permanently embittered and scarred. For Iran, the latest set of US sanctions — on its oil exports and financial interface with trading partners — are thus only a recent intensification of a process that began with the overthrow of the Shah, a key US ally in West Asia. For the US, Saudi Arabia and Israel, Iran is a strategic and ideological adversary, one made more menacing by the fact that it is the only country in the region that draws its national and territorial identity from its ancient and medieval past rather than from 20th-century decolonization.

The Arab expansion and conquests from the seventh century into West Asia and North Africa saw a simultaneous Arabization and Islamization of the entire region we call today the Arab World. The difference was Iran — it was Islamized but not Arabized. In the words of Bernard Lewis, a historian of West Asia and Islam, “Persians remained Persians.” Islam in Iran evolved distinctively, and that it was Shia in character marked out the Persian contrast to the rest of West Asia. Iran’s modern personality is also intimately tied to Persian. As Islam spread in Iran, its acceptance was accompanied by the retention of Persian although the Arabic script was adopted. Iran’s sense of itself and its history is, therefore, very much to be factored into any matrix of geopolitical equations.

For many Iranians, the latest set of US pressures — on its nuclear programme, oil exports and so on — have less to do with specific issues listed and must be understood in terms of the longer trajectory of US policy. This view is, in fact, similar to perceptions in China on the tariffs imposed by the US in retaliation for Chinese trade policy. The Chinese believe that these measures are not so much a trade war as a reluctance to accept China’s continued rise. Unsurprisingly, Iran’s self-image and view of its history are in many ways similar. The 19th and 20th centuries were periods of humiliation by Western powers then on the ascendant, and its time now has come again as the West is in decline. How much of this analysis squares with reality is another matter but there is enough that is remembered of Iran’s medieval and ancient history to reinforce a fierce sense of nationalism against US pressures.