As the Sabarimala temple issue has shown, conversations on the subject are much needed in India 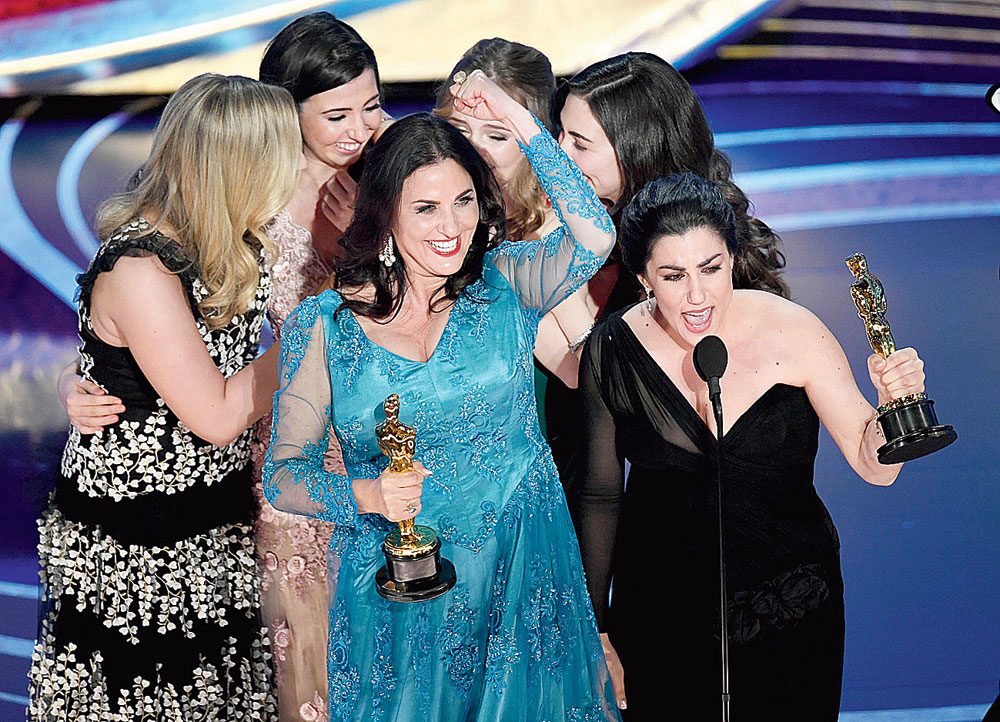 Melissa Berton, centre, and Rayka Zehtabchi (at the mic) accept the award for best documentary short subject for "Period. End of Sentence." at the Oscars on Sunday, February 24, at the Dolby Theatre in Los Angeles.
(AP)
The Telegraph   |   Published 01.03.19, 12:27 PM

Sir — It was baffling to read about the massive fire that destroyed around 300 cars at the Aero India 2019 air show that was recently held in the Yelahanka air base in Bangalore (“300 cars catch fire in air show parking lot”, Feb 24). The inferno was initially rumoured to have been caused by a lit cigarette that had been thrown into the dry grass on the field. This, aided by heavy winds, reportedly facilitated the swift spread of the fire, triggering panic and fear. While the defence ministry has suggested that an overheated silencer belonging to one of the cars could have caused the fire, only a thorough probe will reveal the truth of the matter. It must be asked whether the incident was an accident or an act of sabotage.

Sir — It was saddening to hear about the fire that engulfed around 300 cars at the Aero India show. One must be thankful that no injuries have come to light. It is, however, a matter of shame that such a hazardous incident can occur at an event where security should be tight. The real cause of the fire must be ascertained as soon as possible, and steps must be taken to ensure that there is no recurrence in the future.

Sir — One of the reasons for incidents such as the one that occurred at the Aero Show is that simple fire-safety precautions are often not taken. In fact, in India, most high-rise buildings have little or no provisions to effectively tackle fires. Moreover, poor town planning and oversights with regard to road width and approach prevent fire engines from reaching the sites of fires quickly.

It must be asked why hundreds of fuel-laden cars were packed into a parking lot with tall, dry grass in a breezy city. Could not the organizers have arranged to have the grass mowed?

Sir — The Sri Lankan cricket team created history by becoming the first team from Asia to win a Test series in South Africa (“The boys did really well: Karunaratne”, Feb 24). It did so after claiming an eight-wicket victory in the second and final Test at St George’s Park. The win is even more significant because both India and Pakistan failed to clinch a series victory in South Africa before this.

Sri Lanka’s thrilling win in the first Test in Durban was considered a fluke by many. The naysayers have been effectively silenced by the second win at Port Elizabeth, especially since it was such a decisive one. It proved that the young Sri Lankan boys are determined to scale new heights. Credit must go to the bowlers, who restricted the Proteas in the second innings, helping the Sri Lankan batsmen to play well. One hopes that the team continues to play with such levels of excellence.

Sir — The manner in which Sri Lanka snatched a victory in the Test series against South Africa in the latter’s backyard was epoch-making. In terms of performance, Sri Lanka has been on a sticky wicket of late, but it staged a remarkable comeback on the back of a bunch of young, promising players. It was heartening to watch the visiting team dominate on foreign soil.

The team, of course, reaped the benefits of the performance of the bowling unit. Kusal Perera’s extraordinary batting throughout the series also paved the way for the victory. It is fitting that he was adjudged Man of the Series.

South Africa were always the favourites to win on their home turf, but they could not withstand the adverse situations and also failed to collect big runs in two matches. In Port Elizabeth, Sri Lanka’s Kusal Mendis scores 84 runs during a difficult point in the game, and that is what took his team over the finish line. This is a huge morale booster for the team just before the World Cup. If they maintain this momentum, there will be more victories coming their way.

Sir — In the recent past, two relatively weak cricket teams have achieved the impossible by beating their stronger opponents. First, the West Indies defeated England in two of the three Tests they played. They clinched the series 2-1. Soon after, Sri Lanka comprehensively beat South Africa in both Tests of the two-match series, much to everyone’s surprise. This is great going for Test cricket: it shows that the format is alive and kicking in spite of the burgeoning popularity of one-day internationals and Twenty20 matches.

Sir — I was glad that a film on menstruation, Period. End of Sentence., won the Oscar in the best documentary short subject category this year. This is momentous, given the taboo that persists around the subject and the demeaning way in which women are treated for having periods. In India, women devotees of child-bearing age — in other words, women who menstruate — were, till recently, barred from entering places of worship like the Sabarimala temple, and had to face violence for exercising their right to do so. The short film’s Oscar win will hopefully go some way in encouraging people to educate themselves about menstruation.