Advertisement
Home / Opinion / Past as present

Ukraine is not a tussle between light and darkness 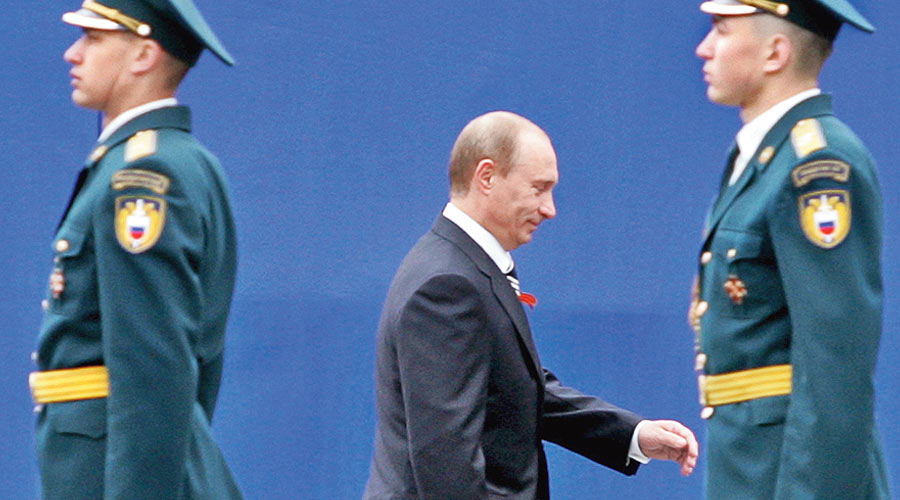 The tendency to view the immediate as the most significant is overwhelming. In the aftermath of the Russian military offensive against Ukraine — an independent country whose national sovereignty had never been fully digested by Moscow — there has been a generous overuse of the phrase, ‘turning point’, to confer additional significance to the (as yet) calibrated war. Whether the Ukraine crisis does indeed escalate into something much bigger — the description by the historian, Christopher Clark, of Europe “sleepwalking” its way into World War I is another analogy now in vogue — or peters out into a series of military and diplomatic adjustments is not yet known. What, however, is clear is that the simmering Russophobia that was assuming shape ever since the rise and consolidation of Russia’s president, Vladimir Putin, has taken a concrete form. If nothing else, another Cold War with the West targeting Putin is now guaranteed for the foreseeable future.

As usually happens with events whose likely course is a matter of speculation, the war in Ukraine has been plotted with unending invocations to history.

The first, inevitably, is Munich — a reference to events in 1938 that led to Adolf Hitler occupying and ultimately gobbling up Czechoslovakia, a country created on the debris of the Austro-Hungarian empire in 1918. Also linked to the Munich agreement is the term, ‘appeasement’, meaning an unnecessary indulgence of autocrats and dictators for the sake of an elusive peace.

The comparisons of Putin’s reign with the Third Reich seem compelling at first glance. If the sense of German national humiliation after the Treaty of Versailles created Hitler, Putin can also be described as the product of the angry despair that marked Russia after the chaos that defined the first two decades of its post-Soviet existence. Putin promised purposeful rule, restoration of national pride, and economic recovery and, by and large, he has successfully brought Russia back to the global high table. His approach hasn’t been copybook liberal statecraft, to say the very least, but his excesses haven’t replicated Stalin’s record either. At best, he has quite successfully presented a radical contrast to the ponderous, political correctness of the European Union.

Of course, there is a slight problem in projecting Ukraine as the epitome of enlightened, liberal values. In terms of corruption and political venality — the present incumbent may be less tainted — its record is significant and probably on a par with other parts of the erstwhile Soviet Union. As the EU may discover to its cost in the coming days, the bulk of those crossing the border to allegedly flee Russian tyranny are also fleeing the hopelessness of daily life. It is instructive to note that when Germany invaded the Soviet Union in 1941, its forces were welcomed as liberators in Ukraine. Indeed, volunteers from Ukraine were prominent as guards in the Nazi death camps that mushroomed across eastern Europe. Unless Ukraine is incorporated into the EU — with all its attendant benefits — there is not much to choose between Russia and Ukraine. The present war is hardly a tussle between light and darkness.

More pertinent is the tussle between Ukraine’s assertion of national sovereignty and Russia’s concern over its national security. Kyiv is right to insist that Moscow acknowledge its right to make its own sovereign decisions without the Russian bear threatening it. This, in effect, means forging a closer relationship with the EU and, eventually, joining the body and taking up membership of NATO. Both ensure tangible guarantees that the country doesn’t revert to an earlier status of Little Russia and is incorporated within the new Russian empire.

On its part, fully cognizant of Ukraine’s status as the second biggest economy of the former Soviet Union, Putin is rightly wary of bringing the West and NATO to Russia’s immediate border. Although the comparison may sound galling to the champions of the anti-Putin jihad, the Russian president is reacting the same way as the president of the United States of America, John F. Kennedy, did in October 1962 after it was discovered that the Soviet Union had stationed missiles targeting the American mainland in Fidel Castro’s Cuba. At that time, Nikita Khrushchev backed down. The sensible course for Putin is to press for a guaranteed demilitarized but independent Ukraine. As of now, the time for that compromise appears to have passed and NATO is confronted with the equal threat of a common border with Russia, if Ukraine falls.

The comparisons with Munich 1938 must be juxtaposed with the re-emergence of ‘empire’ as an idea driving Putin’s Russian nationalism. One of the features of Putin’s politics stems from the belief that the collapse of the Soviet Union was one of the biggest tragedies for Russia. Overnight, Russia lost its status as a superpower. Worse, from being a multinational State, it was reduced to the status of an ethnic nation with a large number of Russian-speakers outside its national borders. Therefore, just as Hitler attempted to bring all ethnic Germans under the umbrella of the Third Reich, Putin has sought to tie up all the loose ends of the ethnic nation. The annexation of Crimea was an important part of the project, as is the perception of Ukraine and Belarus as part of the Russian fatherland. Unfortunately for him, the invasion appears to have fostered a greater sense of nationhood in Ukraine obliterating much of the tentativeness of the past three decades since it voted in a referendum for independence. At the same time, it is important to recognize that support for incorporation into Russia is not totally non-existent, a phenomenon that Putin has exploited.

The issue that worries the West, perhaps with some degree of justification, is whether Russia will be content being an ethnic nation or will try to recreate the Soviet Union. Certainly, the threat of Russia alarms the erstwhile Warsaw Pact nations, particularly Poland and Hungary. These two countries have combined assertions of national sovereignty within the EU, with a demand for more effective steps to control the Russian bear. Europe has seemingly responded but with the awareness that its appetite for any long-term confrontation with Russia has died. That, Putin believes, is his biggest strategic asset.