Politics and Play | What Hindutva offers to Hindus 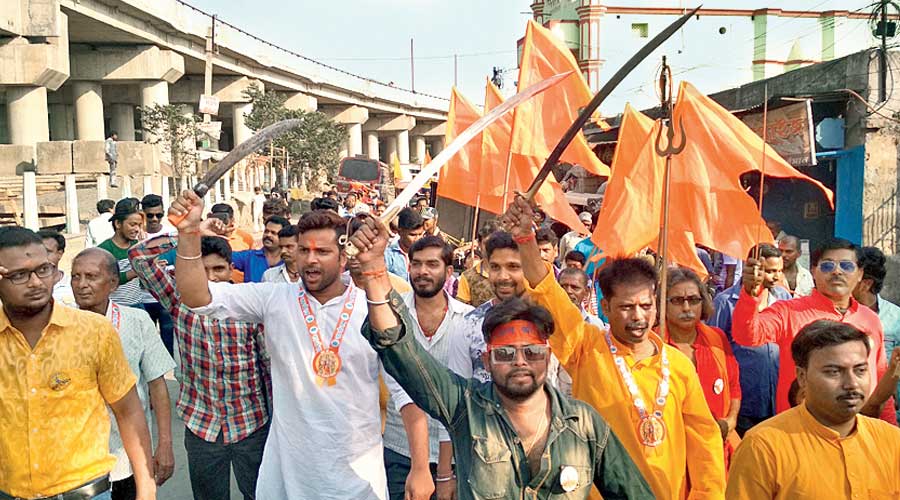 Writing in the 1980s about the ethnic conflict in his home country, the Sri Lankan anthropologist, S.J. Tambiah, described the Sinhalese as a “majority with a minority complex”. The Sinhalese constituted more than 70 per cent of the population, they controlled the country’s politics and dominated the bureaucracy and the army, their religion, Buddhism, was the country’s official faith, their language, Sinhala, enjoyed a superior official status to other tongues and, yet, despite all this, the Sinhalese were consumed by a pervading sense of victimhood. They felt threatened by the minority Tamils, complaining that the Tamils were better educated because they were favoured when the island was under British colonial rule, that they were assertive because they had the support of India (a country much larger and militarily more powerful than Sri Lanka), and that if their aggressiveness was unchecked the Tamils would overwhelm the Sinhalese in their one and only homeland.

I was reminded about Tambiah’s formulation about Sri Lanka when I read a newspaper report about a meeting in the town of Udupi between some citizens and the Swami of the Pejawar Matha. The town and district of Udupi have, in recent years, emerged as Karnataka’s laboratory for hardline Hindutva. It is the town where a local college, encouraged by a BJP MLA, enforced a ban on the hijab that did not exist before, sparking a statewide and countrywide controversy with deeply damaging consequences for communal peace. The Pejawar Matha is one of the eight religious institutions, which collectively run the famous and much-visited Krishna temple in Udupi.

After their success in enforcing a ban on the hijab — thereby denying many young girls their right to education — the Hindutva hardliners of Udupi had got a pliant administration to impose a ban on Muslim shopkeepers participating in fairs associated with Hindu temples or festivals, although they had done so for many years previously to the benefit of thousands of customers of all faiths or none. Knowing that they could get no succour from the state government, or even perhaps from the courts, a citizens’ group, which included some Muslims, called in desperation on the head of the Pejawar Matha and asked him to intervene against the ban on Muslim traders and, thus, help promote communal harmony. The Swami told them that Hindu society “had suffered a lot in the past”. Then the newspaper quoted him as saying: “When a section or group continuously faces injustice, its frustration and anger pour out. Hindu society is fed up with injustices.” (See https://timesofindia.indiatimes.com/city/mangaluru/mangaluru-delegation-meets-pejawar-mutt-seer-to-promote-harmony/articleshow/90553998.cms)

Note that the Swami began with an invocation of history, the claim that Hindu society ‘had suffered a lot in the past’. I suppose the reference here is to the Muslim kings who ruled over much of what is now India in the medieval period. Such references are, of course, ubiquitous to Hindutva rhetoric, as witness the speeches made in Uttar Pradesh in recent months by the prime minister, the Union home minister, and the state’s chief minister. The working-class Muslims living in Lucknow or Udupi in 2022 have not the remotest connection to these Muslim rulers of the past; yet the accident of a shared religion is used to intimidate and shame them.

Making Indian Muslims today feel guilty for what the Mughals or even Tipu Sultan may (or may not) have done centuries ago is a pernicious practice. Note, however, that the Pejawar Swami himself moved on almost seamlessly to the present by speaking of Hindus ‘continuously facing injustice’. From whom and how? In demographic terms, Hindus are even more dominant in India than Sinhalas ever were in Sri Lanka. Their hegemony over the political process and the administration of law and order is pretty near complete. Muslims in Karnataka are utterly powerless — politically, economically, socially, and culturally. They are underrepresented in the legislature, in the civil services and the police, in the judiciary, and the professions. Their economic status is precarious. Furthermore, a party committed to Hindu supremacy is in office both in Karnataka and India as a whole.

And, yet, the Pejawar Swami can present Hindus as victims of discrimination and injustice.When the head of an ancient, well-endowed, well-respected and hugely influential religious order speaks in this manner, we know that we are in the presence of a majority with a minority complex.

There are two distinct, if inter-related, dimensions to Hindutva’s attack on Indian Muslims. The first dimension is political, the diabolically successful endeavour to create a winning ‘Hindu’ vote bank, by getting a significant section of Dalits and OBCs inside the Hindutva tent. Since, in most states, roughly 80 per cent of the electorate is composed of Hindus, if the Bharatiya Janata Party can get roughly 60 per cent of them to vote for it on this Hindu-first and Muslim-excluding plank, it is home and dry. (This is where the BJP has only one major political party to oppose it. In states where several parties have active stakes, even 50 per cent of the Hindu vote would be enough for the BJP to win.)

The second dimension of Hindutva’s attack on minorities is ideological, the conviction that Hindus are the only true, authentic, reliable citizens of this land, and that Indian Muslims (and, to some extent, Indian Christians too) are somehow rendered inauthentic and unreliable because (in V.D. Savarkar’s notorious formulation) their punyabhumi (holy place of worship) is located outside of their pitrabhumi (homeland). This sense of being the only true owners of the land prompts Hindutva activists to continually provoke and taunt Indian Muslims about their dress, their cuisine, their customs, their forms of economic livelihood and so on.

In a recent public intervention in Mysuru, the brave and much admired Kannada writer, Devanur Mahadeva, bought halal meat in defiance of a ban imposed by Hindutva goons. As he did this he said, “hate is the energy drink of the right-wing.” (See https://twitter.com/KeypadGuerilla/status/1510866239899373568?ref_src=twsrc%5Etfw) This was a brilliantly succinct description, to which I may be allowed to provide an addendum. This is that the hate in this energy drink is mixed with paranoia. For Hindus under the influence of Hindutva have become both fearfully insecure as well as consumed with an irrational hatred towards their Muslim fellow citizens.

In the short-term, the playing out of this ideology in practice will grievously hurt Indian Muslims (as it is already doing). In the long-term, however, it will come to haunt and hurt Hindus as well. The Sinhalese stigmatization of Tamils in Sri Lanka, the Sunni stigmatization of Hindus, Christians, Ahmadiyyas and Shias in Pakistan, and the Buddhist stigmatization of Rohingyas in Myanmar are all cautionary tales in this regard. These three countries would all have been far better off today had they not each become so captive to an ideology of religious majoritarianism. For hate and paranoia are not the means by which peaceful and prosperous societies are nurtured or built.