A revisionist thesis on Muslim representation 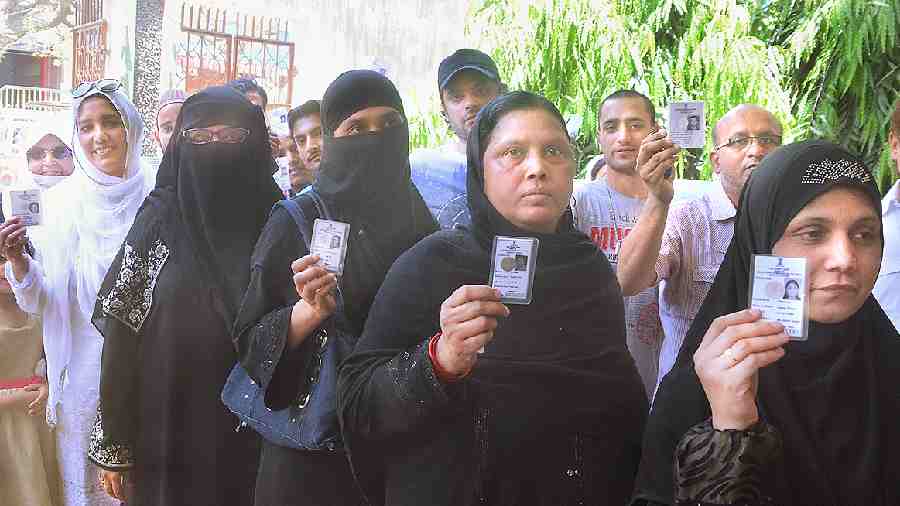 Non-BJP parties know that Muslim communities will have to eventually vote for them
Telegraph Picture
Hilal Ahmed   |   Published 24.06.22, 02:43 AM

The Bharatiya Janata Party’s reluctance to nominate Muslim leaders to contest the Rajya Sabha election is a relatively new phenomenon. It is well-known that the BJP does not prefer to give tickets to its Muslim leaders in Lok Sabha and assembly elections. This move is always justified in the name of ‘winnability’. However, this has not been the case with the Rajya Sabha polls so far. Many senior Muslim leaders from the BJP — from Sikander Bakht to Mukhtar Abbas Naqvi — have represented the party in the upper House. In fact, the Rajya Sabha has been treated as a safe passage to induct Muslim faces in Parliament. This unprecedented political move is very relevant. It underlines the ways in which the notion of Muslim representation is politically played out, especially in relation to the much-talked-about slogan of ‘Sabka Saath, Sabka Vikas’.

Muslim representation, we must note, is one of the most insufficiently analysed political phenomena. There is a set formula to measure Muslim representation, which is always employed almost uncritically. We are told that there is an intrinsic relationship between Muslim legislators and Muslim communities. Hence, if the total Muslim population of the country is divided by the number of elected Muslim MPs and MLAs, we might be able to reveal the exact level of Muslim representation or underrepresentation.

This is exactly what the Trinamul Congress leader, Mahua Moitra, says in a recent article. She argues that by “the simple law of averages, in a country where Muslims comprise 15 per cent of the population, a fair and representative process would normally result in a few Muslims being selected”. In order to justify this observation, she further makes a rather provocative point. In her view, “[p]erhaps the inclusion of Muslims in BJP’s legislative bodies would have sensitised the party’s spokespersons to a world less bigoted than their own and prevented a blunder of international proportions.” (https:// indianexpress.com/article/opinion/ mahua-moitra-writes-muslim-mpsmlas-bjp-7960555/)

A refined and perhaps more legalistic argument is advanced by the BJP in recent years to refute this line of reasoning. It is argued that the Indian Constitution does not recognize religion-based political representation (https:// www.indiatoday.in/india/story/ kerala-governor-arif-mohammed- -khan-muslims-minority-india-18- 62785-2021-10-09). For this reason, Muslims need not be represented only by Muslim MPs and MLAs. In other words, the ‘Sabka Saath’ slogan is sufficient to take care of Muslim political aspirations.

Although there is merit in these conflicting sets of arguments, I find them to be naïve, simplistic, and, in a way, misleading. Various studies conducted by the Lokniti-CSDS show that Muslim communities do not participate in politics only on the basis of their religious identity. Muslims do recognise the significance of community-based representation in political decision-making; yet, they do not always prefer to have Muslim leaders as their representatives.

Similarly, the assertion that the presence of Muslim leaders in the BJP would sensitise its approach towards Muslims is empirically incorrect. Muslims leaders of the BJP have always supported the party line overwhelmingly in the last eight years on every critical issue. In fact, they have presented themselves as living examples of the ‘Sabka Saath’ slogan.

On the other hand, the overtly legalist claim that the Indian Constitution does not recognise religion-based representation stems from what I call Hindutva constitutionalism. In this framework, the Constitution is defined merely as a rule book by intentionally avoiding any discussion on the norms, principles and ideals envisaged by the Constitution-makers. It is true that the Constitution strongly advocates a secular imagination of political representation. Yet, it makes special provisions to protect the interests of marginalised groups: scheduled caste and scheduled tribe communities and religious and linguistic minorities.

These serious inconsistencies in the public discourse are the outcome of our intellectual laziness. We still rely on the colonial perceptions of communal representation — both in terms of method (counting numbers) and substance (evoking the rule book). I propose a revisionist thesis to unpack the notion of Muslim representation in contemporary India which might help us initiate an informed and nuanced public/academic discussion on this issue. Broadly speaking, there are three essential aspects of this thesis.

First, we must clarify the constitution of the Muslim community as a political stakeholder. There are two conflicting ways in which Muslim identity is politically formed. On the one hand, there are a number of culturally diversified communities that tend to define themselves as Muslims in a variety of ways. This process may be called substantive Muslimness. These communities, nevertheless, are also addressed as a homogeneous group — either to protect them as a religious minority or to demonise them as the anti-national Other. In both cases, a discourse of Muslimness is created.

Any discussion on Muslim representation will remain meaningless if it does not recognise the political interplay between substantive Muslimness (in terms of diversity) and discourse of Muslimness (in terms of homogeneity). Moitra’s argument responds positively to the discourse of Muslimness as it is principally concerned with the declining number of Muslim MPs and MLAs. This straightforward descriptive analysis, however, cannot explain the political aspirations of Muslim communities at the grassroots level.

Second, Muslim representation is inextricably linked to the political structures, especially the institutional set-up. The direct election based on the first-past-the-post system in the Lok Sabha and state assemblies forces the political parties to form winning configurations of voters at the constituency level. The old KHAM (Kshatriya, Adivasi, Harijan, Muslim) model in Gujarat and M-Y (Muslim-Yadav) model in Uttar Pradesh and Bihar are revealing examples of such configurations. The rise of the BJP as the dominant party has destabilised these older coalitions. This is one of the reasons behind declining Muslim representation in the Lok Sabha and the Vidhan Sabhas.

The institutional set-up of the Rajya Sabha and state councils is very different. These institutions are used by the political parties to accommodate their Muslim leaders by nomination. My study, “Muslim Representation in Rajya Sabha: Forms and Trajectories” (2015 http://164.100.213.102/rscmsnew/careers_documents/Hilal_Ahmed.pdf), shows that unlike the Lok Sabha, there has always been a fair Muslim presence in the upper House (9-10 per cent). This is the first time since 1952 that Muslim representation has dropped to almost 6 per cent in the Rajya Sabha. This contrast between the Rajya Sabha and the Lok Sabha reveals that Muslim representation is contingent upon the actual political functioning of legislative bodies.

Finally, Muslim representation is also about leadership function. As I have argued in an earlier article published in this newspaper (https://www.telegraphindia.com/ opinion/some-facets-of-muslim-leadership-in-india/ cid/1836492), there are three types of Muslim leaders in India — Professional Muslim politicians, Muslim elites and Muslim influencers. The professional Muslim politicians operate as a link between parties and the particular Muslim community they claim to represent. The Muslim elite, on the other hand, functions as systemiser — either to sustain the internal power structure in its favour or to challenge it to get legitimacy. The influencer asserts his/her presence in the media-driven public discourse. These three types of leaders perform very specific functions in different political contexts by producing concrete everyday expressions of Muslim representation.

This revisionist thesis, I argue, is useful to understand the contemporary politics of Muslim representation. The BJP does not need the professional services of Muslim MPs even in the Rajya Sabha. It requires a dedicated set of Muslim influencers like Tarek Fatah or Syed Rizwan Ahmed to nurture its Hindutva constituency. The non-BJP parties have also accepted this logic in a different way. They are interested in protecting the support of the Muslim elite. After all, they also know that Muslim communities will have to eventually vote for them.

Hilal Ahmed has made a film, Qutub: Ek Adhura Afsana, on the contemporary politics of heritage