The hand that feeds 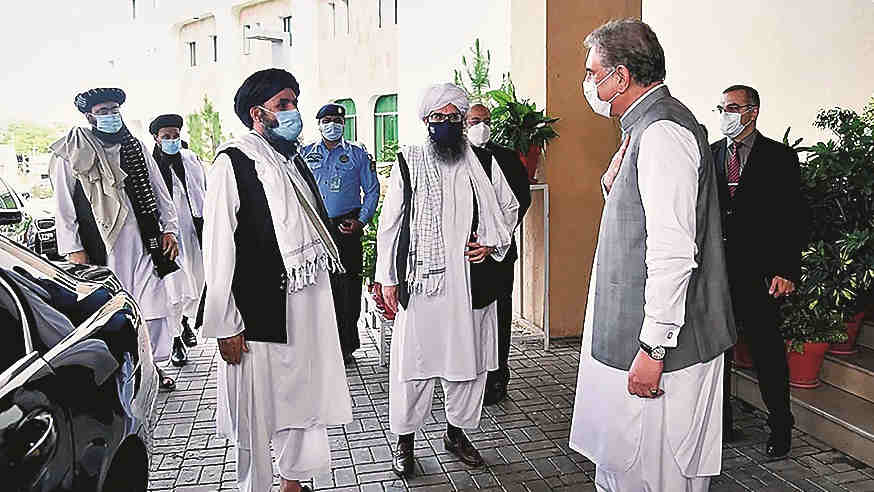 A month after the dramatic fall of the old order in Kabul, what is evident in Pakistan is a mix of sentiment ranging from quiet satisfaction to heady triumphalism. Three factors underwrite these views. Foremost is the sense of achievement that a long and risky strategy to instal a ‘friendly’ government in Kabul has paid off. Second is the sense of vindication that the policy of the United States of America — long disliked in Pakistan and one that unites State and street views like almost nothing else — has been exposed with regard to competence and credibility. Thirdly and finally is the gratification at the erasure of the Indian presence in Afghanistan which had long caused as much psychological envy as strategic discomfort.

It is not as if there are no voices of disquiet or even prophets of doom; there is concern over the risks of blowback and the catalyzing of Pashtun nationalism across the Durand line; over the future cost that Western and US disapprobation will impose; over the risks at the empowerment that radical Islamic groups in Pakistan feel and derive from the Taliban victory, even though such empowerment is welcomed with regard to Kashmiri outfits. But these doubts are fewer and principally confined to the ‘usual suspects’ and dissenters; they are not representative of the mainstream view. The overwhelming mood remains that such problems as may come up can be handled and that there is a good chance that Afghanistan may finally be on the cusp of a stability that has been elusive so far. In Pakistan, ‘stability’ in Afghanistan is also seen to be synonymous with, and inseparable from, a government ‘friendly’ to Pakistan.

Some parallels with the past are inescapable. The Soviet Union’s disintegration in December 1991 was profoundly weakening for the government of the then Afghan president, Najibullah. The resilience he exhibited after the Soviet withdrawal in February 1989 had surprised both supporters and foes. Soviet support, rather than its troops, had been a material factor and the USSR’s collapse meant that the government, which had so far battled the different mujahideen groups effectively, now unravelled quickly.

By April 1992, the former mujahideen factions were now running a new government in Afghanistan. But these were not so much different factions as different armies and a civil war was looming. Pakistan’s aim was to make them pull together, but it was also playing favourites with the different leaders. In September 1995, Pakistan realized a new reality was upon it when its ambassador was attacked and its embassy, inherited from the British and described as a grand colonial structure, reduced to rubble. Pakistan had learnt the hard way that the different factions of the mujahideen that it had nurtured and long supported had personalities of their own and the behaviour they had shown in Quetta or Peshawar was going to change once they were in Kabul.

The Taliban now emerged as the favoured new force that would restore stability to Afghanistan and also be a government ‘friendly’ to Pakistan. What this meant was and remains is a subject of discussion. Then, as now, the view was that its sacrifices for the Afghan cause entitled Pakistan to a government of its choice in Kabul. The term, ‘strategic depth’, also acquired — and has retained — a certain circulatory and narrative value. But the arguments made in its favour, again then as now, suggested, as better-informed Pakistanis emphasized, a certain naivety on strategic matters.

The argument now being heard that being in government would gradually moderate the Taliban also has older antecedents and was heard in Pakistan in the late 1990s too. As it turned out, Pakistan was finally the only nation left making the case for engagement with the Taliban.

Pakistan’s expectation post-1996 was that the Taliban’s success in controlling most of Afghanistan and its major cities would lead to international acquiescence and even an acceptance of the changed realities. This did not happen and support of terrorist groups, misogyny, regressive social policies and an inability to compromise forced the Taliban into steadily growing isolation. By 2001, Pakistan was the only country maintaining diplomatic relations with Afghanistan. Saudi Arabia and the United Arab Emirates, which had earlier recognized the Taliban, had broken relations over the sanctuary provided to Osama bin Laden.

These parallels with the 1990s notwithstanding, there are also significant differences now from the Pakistan-Afghanistan interface of the 1990s. Firstly, Afghanistan was very much in a news shadow then and the interests of the US and the West had shifted. The Cold War was over and the overwhelming focus was on a European war in the Balkans. Secondly, politics in Pakistan was significantly different in the post-Zia phase. Nawaz Sharif and Benazir Bhutto alternated in power and they were both victims and protagonists in the civil-military contests that characterized Pakistan in the 1990s. Musharraf’s coup settled the dust but thereafter tensions with India remained a principal issue in Pakistan blurring, to some extent, the focus on Afghanistan. Thirdly, a major difference lies in Afghanistan itself. The Taliban seized power in an isolated and war-torn economy and society in 1996, quite unlike the case today. While the country has numerous structural fragilities and a massive aid dependency, it is also much younger in its demographic profile, more educated, more urbanized and, finally, much more connected to the external world. Finally, what has changed most dramatically is China’s role and position in the region.

These changes breed hope in Pakistan that this time around its quest for a stable order in Afghanistan with a government ‘friendly’ to it may be more successful. Whether that will happen or not remains a question. Much depends on how much, if at all, the Taliban mindset has changed and evolved in the past two decades. Pakistan is also the country, after Afghanistan, of course, likely to be impacted the most by the answer that emerges from this question. But it is more than likely that what it may find, once again, is the surfacing of the fundamental contradiction between its twin aims of ‘stability’ and ‘friendly’ government.

T.C.A. Raghavan is a former Indian High Commissioner to Pakistan